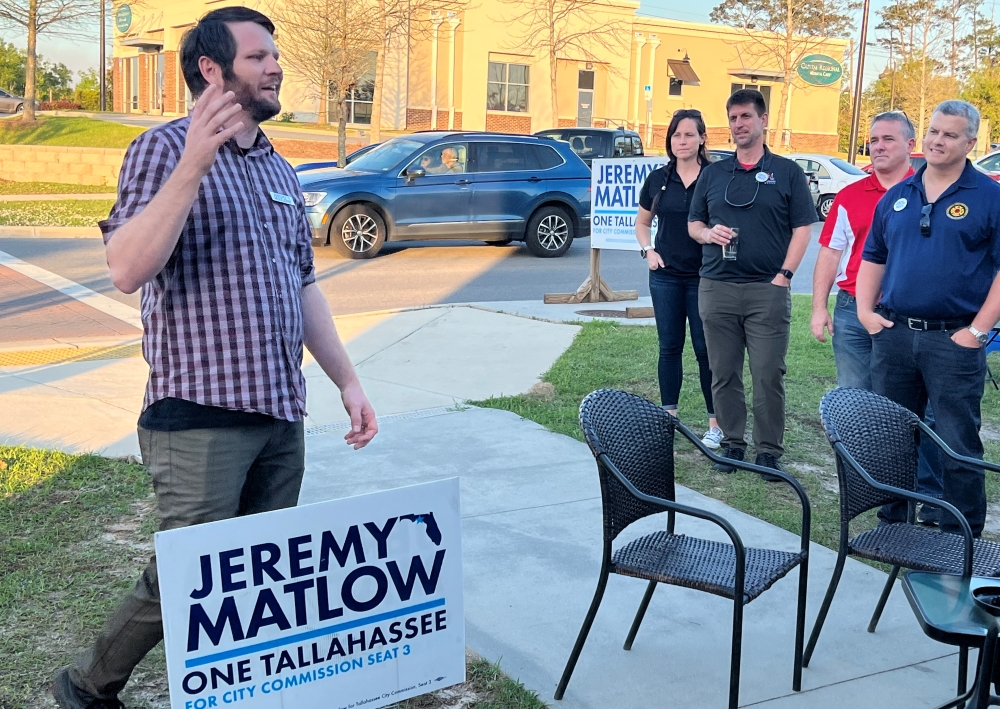 The union supported Matlow, after endorsing his opponent in 2018, because Matlow supported them during 2021 contract negotiations.

The event, which took place at the Barrel Proof Lounge and hosted several dozen people, marked the first major endorsement to a local candidate in Leon County’s 2022 election cycle. The endorsement is also a swap for the firefighter union, as they backed Matlow’s previous opponent, Lisa Brown, in the 2018 election cycle.

Several union members were present during the fundraiser, including TPF President Joey Davis.

He told Florida Politics the union did not back Matlow in 2018 because they already had a relationship with his opponent, but now support him because he worked with and advocated for them during contract negotiations with the city last year. He said Matlow helped put pressure on City Manager Reese Goad to get the deal done.

“A lot of times when you deal with politicians, they go to the city manager and then that’s the end, you don’t ever get a rebuttal,” Davis said. “He’s (Matlow) been willing to have an ongoing dialogue and just an overall willingness to be fair.”

Davis said the union’s support includes not just the endorsement. They will be making a $1,000 donation to his campaign through their PAC, The Big Bend Professional Firefighter and Paramedics PAC. Union members will also go door knocking for Matlow beginning in July.

TPF members and their families were not the only people in attendance. Several local elected officials and political candidates were in attendance, including Leon Property Appraiser Akin Akinyemi and Leon County Commission candidates Josh Johnson, David O’Keefe and Damon Victor. The three candidates, who all are running in different races, were part of the push against the Blueprint Doak Campbell stadium $27 million funding vote that dominated local politics over the past few months.

While the adults talked, Matlow’s sons Declan and Ethan played cornhole, doing their best to lob American Flag bean bags onto the two FSU boards. As their dad got ready to address the crowd, the two tykes rushed over to listen in.

Matlow began his speech by recounting his time growing up on Tallahassee’s Southside and the memory of his mother struggling to support him and his three siblings.

He said his experience growing up impacts the work he does as a Commissioner. He also took an unnamed jab at his opponent, David Bellamy, who has received several $1,000 donations from Tallahassee companies.

“I carry that with me, in every decision I make, because I realize in our city there are just so many people who aren’t being represented. There’s so many voices that need to be listened to,” Matlow said. “They don’t have 15 companies that can write $1,000 checks. They don’t have lobbyists on speed dial. And they don’t come to events like this, because they’re busy just trying to get by.”

Matlow said he was proud to stand by the union during negotiations because they were just asking for enough to support their families and for staffing improvements that would benefit all residents.

“This isn’t about greed. It isn’t about people wanting their personal benefit. They’re public servants. Half of what they were asking for is for all of us,” he said.

He also took aim at several Blueprint decisions, including the stadium funding and the Northeast Gateway expansion.

“I look at neighborhoods that I grew up in. They look the same as they did 30 years ago. Over the last three years, to my objection, our dollars have flowed to new roads to subsidize new developments that haven’t even been built yet,” Matlow said. “We’re talking about $80 million into Welaunee. We’re talking about $27 million for luxury repairs to a football stadium.”

Matlow ended his speech by encouraging those in attendance to pay attention this election cycle, and support the candidates that will represent them, regardless of whether they are incumbents or new faces.

“When you go to the ballot in 2022 and you bubble those names, make sure you’re bubbling it for people that represent you, your neighbors and all of us in Tallahassee,” he said.