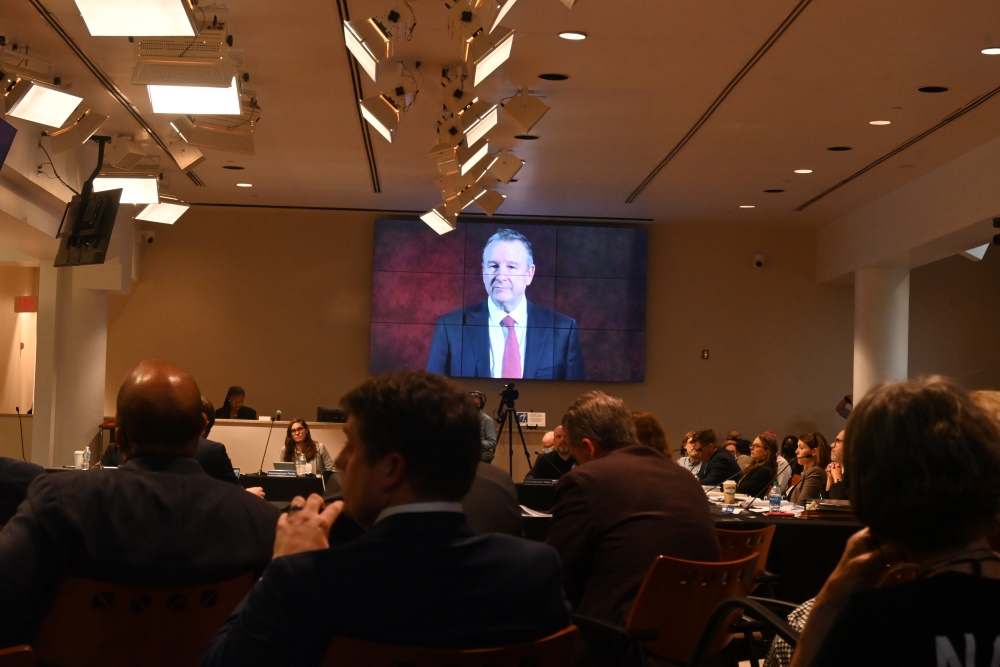 Before the Blueprint vote, 39 people spoke during public comment, and 33 of them opposed the funding.

The Blueprint Intergovernmental Agency Board voted 7-5 Thursday to approve the bonding for several projects, including a $27 million allocation to Florida State University for repairs to Doak Campbell Stadium.

The money, which would come from Blueprint’s Office of Economic Vitality budget, would pay for most infrastructure components within the university’s $120 million plan to revamp the football stadium, according to documents from September’s Blueprint meeting. From that pot, $20 million will be for structural repairs and fixes to put the stadium in ADA compliance, while the bonding process will tack on an additional $7 million.

The issue had sparked political mobilization from the university for the project and political and community groups and candidates for local office against it over the past several months.

Before the vote, 39 people spoke on the issue during public comment: six supporting the funding, 33 against. Of the six, four were either directly employed by FSU or in some way connected with the university.

“Those two stadiums bring us national and international visitors,” Dudley said. “You should support this because it is the right thing to do.”

Mutaqee Akbar, president of Tallahassee’s NAACP chapter, said the $27 million would be better allocated to help people in the community.

“It is interesting when the people stand up and start talking about what they want, it becomes divisive to some people. But this is not divisive. It is what the people need,” Akbar said.

During public comment, Dot Inman-Johnson, Tallahassee’s first Black female Mayor, said she was disappointed board members have not listened to public criticism about how the funding should go to projects that would economically benefit residents in Tallahassee’s poorest communities rather than FSU.

“If after all of this you still vote to support item 5, I am embarrassed (by) you, some of you that live in those zip codes,” Inman-Johnson said. “To FSU, I am embarrassed that you don’t understand that you are taking it from people who need it so much more.”

During the end of public comment, FSU President Richard McCullough appeared in a three-minute video asking board members to back the funding. After the vote, he applauded the board’s decision in a written statement to Florida Politics.

“Today’s vote ensures that Doak Campbell Stadium will remain a significant contributor to the local economy for years to come,” McCullough said. “We commend the Blueprint board for supporting this long-term investment in our community.”

Following public comment, there was controversy surrounding what motion was actually voted on during the meeting.

Before public comment, County Commissioner Kristin Dozier made a motion to vote down the bonding on the stadium that would have allowed the other projects up for bonding to be approved separately. However, County Commissioner Jimbo Jackson amended the motion substituting its entire language, voting to support all the projects at once.

In his comments during the meeting, Jackson did not address the Doak Campbell funding, focusing instead on the other projects up for bonding.

In an interview with Florida Politics after the meeting, he said he made his substitute motion “strictly based on getting the wheel rolling with the other eight projects, but also to protect the interests of the constituents in District 2 here in Leon County.” He said he backed the stadium funding because it is all earmarked for necessary improvements and repairs.

“All of the items that are included in the stadium funding are related to improvements that will improve access for folks with (a) disability, will take care of safety issues that have been on the books for years, and will correct many violations that are considered right now, a stadium life issue. That is one of the primary goals of the Blueprint and its agenda,” Jackson said.

Jackson was not the only person to vote in support of his motion that did not say why they supported the stadium funding. City Commissioner Curtis Richardson discussed why he supported the other bonding items but did not refer to the stadium directly. Mayor John Dailey said he endorsed the stadium funding but spoke for under 15 seconds and did not address his reasons further. County Commissioners Cummings and Proctor did not speak during the meeting before the vote.

City Commissioner Williams-Cox said she met with President McCullough to discuss the funding. She said he agreed that the university would work to expand the use and access of the stadium to provide more access to members of the community and work to further other areas of partnership with city and county initiatives.

She added that she believed separating the stadium bonding from the other bonding projects could affect Blueprint and the city’s credit, although Blueprint staff said it would have no impact.

County Commissioner Welsh said he opposed the funding because he did not think it was the most effective use of economic vitality dollars. While the stadium repairs will bring an estimated few dozen jobs to the area, he pointed to the recent Amazon project Blueprint helped attract with a fraction of the cost.

“You can do 10 Amazon projects for the size of this allocation. I just can’t get away from that,” Welsh said. “It’s just not the biggest bang for the bucks.”

City Commissioner Matlow said he supports the other bonding items except the stadium bonding. He said he wanted to vote on Dozier’s original motion to be able to separate the issues.

“I just have to ask myself why members of this body are being denied that opportunity,” Matlow said.

After the vote, Dozier told Florida Politics she didn’t know what drove Jackson’s motion but that it was clear he did not want her motion to rescind the stadium funding from the other bonding items to succeed.

“His comments and a number of the other people who supported his motion really were disconnected from the conversation about Doak and the economic development funds,” Dozier said.

She said their comments focused on incorrect concerns that pulling Doak from it would jeopardize the other projects or why they supported them. She also said those who voted against the motion would have supported bonding the other projects if the stadium wasn’t part of the package.

“If it hadn’t included Doak, you would have gotten unanimous support. Every one of us supports those infrastructure projects. We’ve been working too hard on that. The only question tonight was about Doak,” she said.

O’Keefe, a candidate in the five-person race for Dozier’s soon-to-be-vacant seat, said the vote could drive opposition to those who supported it during elections later this year.

“I want everyone to know what it feels like today to be ignored by your representative,” O’Keefe said. “They think you will forget. Let them know you aren’t here to speak to a brick wall. You are mad, and they aren’t hearing you.”

Johnson, a candidate running against Maddox, said their vote would influence public support for those on the board.

“This is irresponsible, full stop,” Johnson said. “You are subject to the court of public opinion. Whatever you do, we are going to pin it up and remember it on Aug. 23. Remember that.”