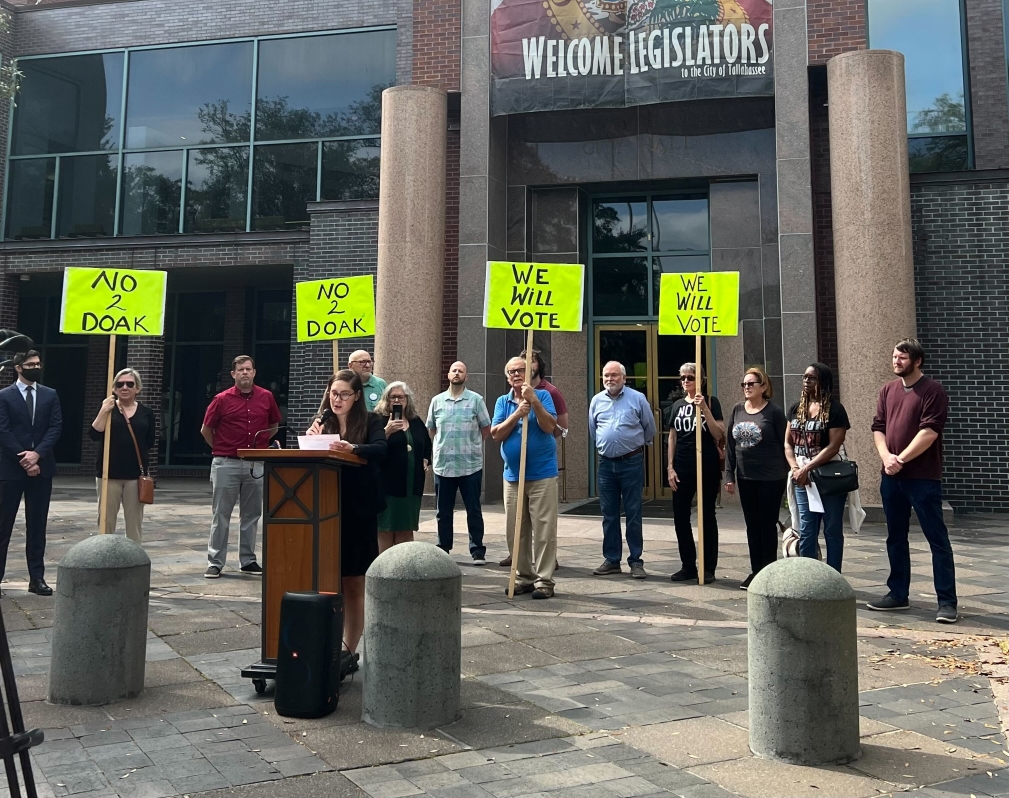 'I have never in my time on the commission seen the community come together with one voice to oppose something like this.'

A coalition of local elected officials, candidates and political groups across the political aisle hosted a press conference on the steps of Tallahassee City Hall Friday to oppose the finalization of $27 million in Blueprint Intergovernmental Agency funding for Doak Campbell Stadium repairs.

A vote on that funding is expected next week. Representatives of the Tallahassee NAACP, Leon County Democratic Party and Americans for Prosperity-Florida (APF), as well as City Commissioner Jack Porter spoke during the press conference. City Commissioner Jeremy Matlow and Leon County Commission candidates Damon Victor and David O’Keefe were also in attendance.

The Blueprint board is set to vote next Thursday on whether to finalize bonding for $27 million in funding from the economic development section of Blueprint’s budget. The money would pay for most infrastructure components within the university’s $120 million plan to revamp the football stadium. The board voted 7-5 in December to begin the bonding process.

Broadway was also the person who drafted a successful resolution from the party asking local elected officials sitting on the board to return and stop accepting campaign contributions from supporters connected to Florida State University leadership. The resolution followed reports that Tallahassee Mayor John Dailey’s campaign received over $20,000 from people connected to FSU after he backed the funding during December’s meeting.

Phillip Suderman, policy director for APF, a libertarian conservative political advocacy group, also voiced his group’s opposition to the funding. While he said he is a proud alumnus and supporter of FSU, he believes they should raise the funds for the project privately.

“This government handout is not a good use of taxpayer dollars,” Suderman said. “Government exists to make sure everyone is helped, not a select few.”

During December’s meeting, backers of the stadium funding argued that FSU football generates $50 million in direct local spending every year.

Then-FSU Director of Athletics David Coburn said it would be difficult for FSU boosters to raise money for the infrastructure repairs the stadium requires.

“Frankly, those are not the kinds of things that donors dream of spending money on,” he said. “They don’t want to say, ‘Yeah, that restroom up there has my name on it.’”

Tallahassee NAACP President Mutaqee Akbar said during the press conference that the stadium funding would only create 34 permanent jobs. He said the money would be better spent on grant programs for local small businesses and for vocational skill training.

“There are a lot of small, Black minority businesses that can use assistance, that can use help,” he said. “That’s a pot of money that can be used to deal with those issues.”

During her comments, Commissioner Porter said about two-thirds of the public input her office has received about the funding has opposed it. She said the community response and the coalition of groups opposing it is unique.

“I have never in my time on the Commission seen the community come together with one voice to oppose something like this,” Porter said.

In her closing statement, she encouraged other local elected officials to change their vote on the topic next Thursday.

“We can send a message that would help heal the public trust and say, ‘We heard you, and we are going back to the drawing board to bring forward some better proposals that will actually move the needle on poverty, economic development, and providing local opportunities that will lift our whole community up,’” she said.

The vote whether to finalize the bonding will be during the Blueprint board’s meeting that begins at 3 p.m. Thursday.