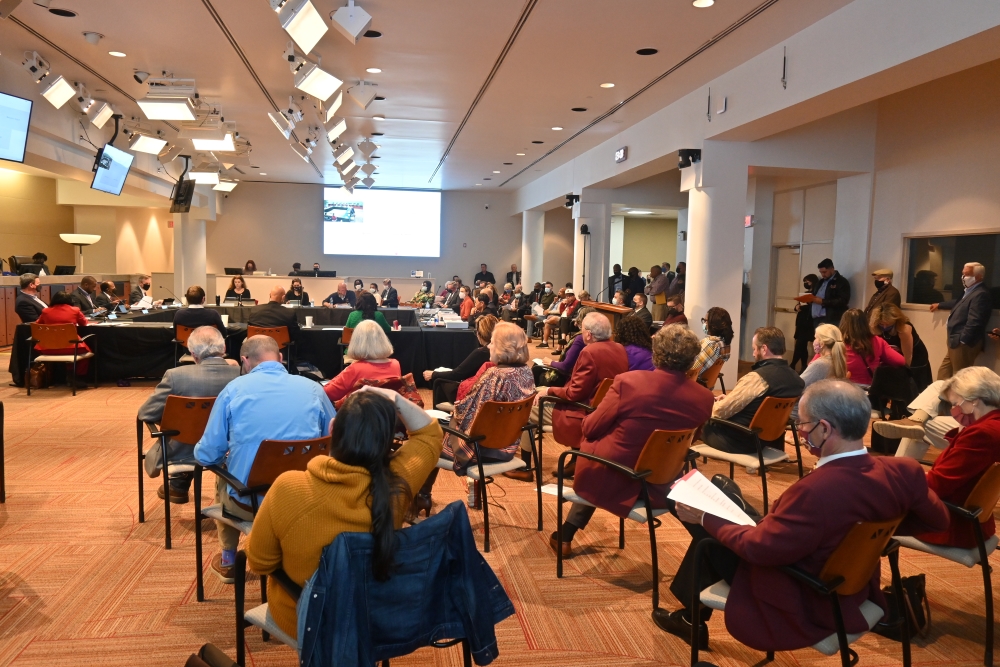 The final vote to approve the bonded money and proceed with the funding will be in February.

The Blueprint Intergovernmental Agency Board voted 7-5 Thursday to move forward with the bonding process for $20 million for renovations to Florida State University’s Doak S. Campbell stadium.

The board voted 8-4 in September to give FSU $20 million of agency funding to promote economic development. FSU requested the funding earlier this year after pulling a $30 million request for the construction of a convention center.

The money would pay for most infrastructure components within the university’s $120 million plan to revamp the football stadium, according to documents from the September Blueprint meeting.

FSU Director of Athletics David Coburn, who spoke at the meeting, also wrote a letter earlier this week defending the project.

In the letter, Coburn said the $20 million is being invested in an FSU Facilities construction project, not in the $100 million “fan experience” project fundraised by FSU boosters. The $20 million will fund structural repairs as well as safety and disability accessibility improvements, according to an assessment report contracted by Blueprint outlining the project’s costs.

During the meeting, Coburn said it would be difficult for the Boosters to raise money for the infrastructure repairs the stadium requires.

“Frankly, those are not the kinds of things that donors dream of spending money on,” he said. “They don’t want to say, ‘Yeah, that restroom up there has my name on it.’”

He also said the $100 million already raised could not be moved, as those donations were earmarked for other portions of the stadium plan.

“I ask you … I plead with you to look at the big picture,” he said. “We are all in this together.”

The most prominent speaker against the spending was Mutaqee Akbar, president of Tallahassee’s NAACP. The local NAACP executive committee voted 13-0 on Dec. 5 on a resolution urging the Blueprint Board to vote no on the stadium funding.

Akbar said bonding the money to FSU would keep the money from aiding economic growth within local minority communities.

“The ask remains that you don’t wipe out our bonding capacity for economic development, especially if you care about minority communities like you campaigned on,” Akbar said.

Another speaker said the money would be best used on issues dealing with economic problems, such as homelessness. She was concerned exhausting the OEV budget with the stadium project would cause Blueprint to lose out on other projects.

“Are we not looking out for our people here?” she asked. “That’s why people don’t come here, because they do not feel like you listen.”

Brian Welch, before opposing the bonding, voiced concern that the allocation would not service every member of the community.

“Every taxpayer, every family, every businessperson, this is their money,” he said. “FSU boosters service the constituents of one group, FSU fans.”

Jack Porter said she opposed the project because it was not what members of the community wanted.

“Simply put, the community doesn’t support this. I have gotten hundreds of emails,” she said. “Pitting communities against each other, that is not what this should be about.”

The commissioners who supported the bonding pointed to the economic impact, including that football games in the stadium bring about $50 million to Tallahassee every year.

Leon County Commissioner Bill Proctor pulled out a list of FSU football players that have been drafted into the NFL, arguing the football team had made more wealthy Black men than any other program in the school.

“There is no place at FSU that is generating these kinds of millionaires,” he said. “Pull up their list and show it to me.”

Tallahassee City Commissioner Curtis Richardson said spending the rest of the OEV money would not dry up economic growth in the city, as he has seen the city grow economically since he moved here in the 1970’s.

“I have seen phenomenal growth in this community since that time,” he said. “Tallahassee is an attractive community to start a business.”

Richardson also said some of the people opposing FSU’s funding were using poorer residents of Tallahassee’s south side for political aims.

“We want a hand up, not a handout,” he said. “Don’t use that as part of your narrative to justify what you do want or don’t want.”

The vote came after members of the board butted heads over meeting procedure.

Shortly after public comment, Minor motioned to approve three of the four bonding issues being considered, but not approve the bonding for FSU’s stadium. However, Blueprint staff blocked the motion. Blueprint attorney Susan Dawson made a point of order because Minor’s motion came after a motion by Mayor John Dailey to adopt all four bonding issues. Under Robert’s Rules of Order, the decorum rules the board must follow, a motion must be resolved before another is made.

Leon County Commissioner Nick Maddox, the board’s chair, told Florida Politics he had been asked by Dailey during the last few speakers of public comment if he could speak when board discussion opened. Maddox then asked the other board members if they would like to sign up to speak and took down speaker names. He said he did this to speed up the meeting, which ran five hours from 3-8 p.m.

Dailey refused a request from Matlow to pull his motion and replace it with one approving the three and allowing the FSU bond to be taken up in a separate vote.

Florida Politics has reached out to Dailey for a comment on his motion. This story will be updated if he responds.

Minor, who previously backed the funding, announced on Twitter before the meeting he would be withholding his support.

“Leon County citizens have spoken loudly and clearly, and I have heard them,” he said. “Residents want to see these limited economic development funds invested in other ways.”

Minor’s reversal comes as one of his 2022 challengers is campaigning heavily on opposing the funding. Damon Victor, who is running against Minor, wrote an op-ed in the Tallahassee Democrat in August opposing the money. He was one of the public commenters at Thursday’s meeting.

Victor told Florida Politics he wants the money to be used as it is collected for projects to support local businesses, instead of bonded all at once for FSU.

“This is a decision to spend money we don’t have,” he said. “Why is FSU even considering requesting this money? Because the money doesn’t exist.”

Several other candidates for local office have focused their campaigns on opposition to the stadium funding.

Although the board voted to move forward with bonding, a final decision has not been made. The board must also vote in February to approve the bond.

During Thursday’s meeting, Dozier announced her intent to make a motion stopping the funding during February’s meeting.

“Mr. Chair, I respectfully ask to be put on the queue first at February’s meeting,” she said to Maddox after making her announcement.