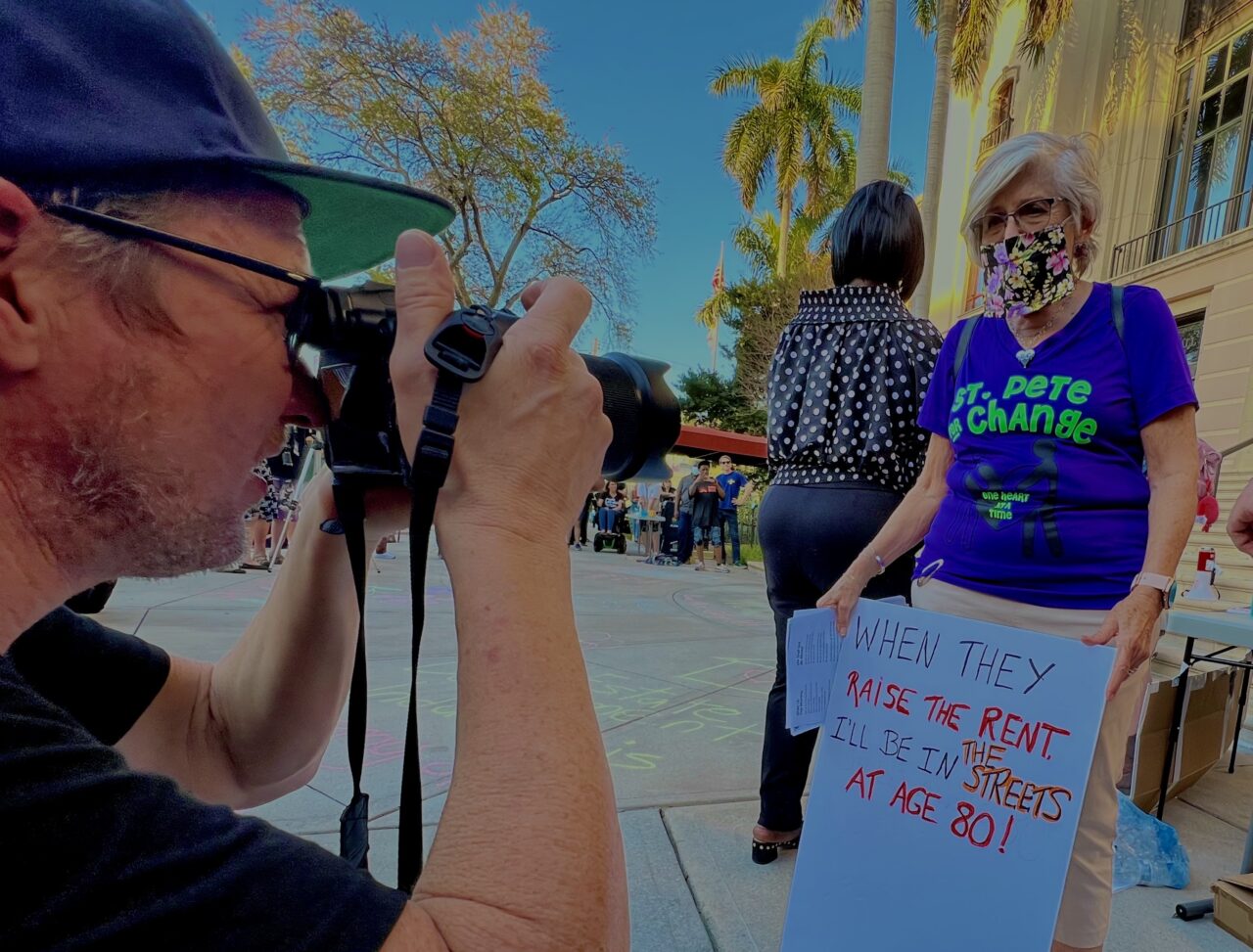 Protestors gathered outside City Hall Thursday to demand the city do more to reel in soaring rents.

In her near 81 years of life, Diane Steinmuller has lived all over the world. She taught English to immigrants and refugees going into Boston. She taught Spanish to Nicaraguan teachers during the Contra war and, until about three years ago, taught Spanish in Mexico.

And in all that time she has never had to worry about having a place to live — until now.

“I’ve never experienced anything like this. Never. I mean never,” Steinmuller said. “What’s going to happen when they raise my rent again? I’m going to be 81 and in the streets.”

Steinmuller said she has had to move three times in the under three years since she moved to St. Pete. And the retired teacher wasn’t alone. About 100 people gathered Thursday outside St. Petersburg’s City Hall to protest what some called a lack of action from the City Council on a growing housing crisis. The week before, council members refused to explore rent control in the city and voted down a measure from Council Member Richie Floyd to declare a housing state of emergency in the city.

Just four days later, a study conducted by graduate students from the Harvard Kennedy School found nearly half of St. Pete renters are cost burdened. It also found about 69% of renters who make 50% or less than the area median income spend more than half that income on rent.

Meanwhile, Steinmuller and residents like 30-year-old Ariana Simonetti fear they’re on the verge of homelessness. Simonetti has been in the same apartment for a year and a half. But when the complex was purchased by a new company, her rent increased nearly $300 per month and she had to reapply to see if she qualified to live in the apartment she already occupied. Now, she has until March to find an affordable place to live.

The search, she said, is not going well.

“I’ve been looking every day,” Simonetti said. “I got turned down by literally 12 places yesterday for different reasons. Either my credit score wasn’t high enough or I didn’t make triple the rent.”

Rents went up nearly 25% in St. Pete last year. That’s the third-highest rate increase in the country. Inflation has also risen in the Tampa Bay area at among the highest rate in the country, adding more financial burden to residents still reeling from the impact of the COVID-19 pandemic.

Organizations like the St. Petersburg Tenants Union have formed to advocate for not just affordable housing availability, but protections and support for overburdened renters. Even city employees, some of whom are required to live within the city, said they’re struggling to stay housed. Protestors outside City Hall demanded the city rein in rents. The Harvard study also found an investor-driven housing market has sent rent in the city soaring over the last decade.

But rent control in Florida is difficult to implement. State preemptions on rent control are so tight, city leaders fear St. Pete would be inundated with lawsuits if a rent control measure were to pass. But state law also says rent control can only be implemented through a ballot initiative, meaning it would be the city’s voters who decide to enact any form of rent control in the city.

Dietrich, a member of the St. Petersburg People’s Council, said renters are demanding six-month notice of rent increases, a landlord registry, rehousing assistance and right to counsel for people facing evictions. Dietrich said the People’s Council has been meeting regularly for months to discuss how they would react to the city’s lack of response. It’s time, he told Thursday’s crowd, to turn civic duty into civil disobedience.

“We said we were going to move forward with a tent city occupation if our demands were not met. It’s time to come to a decision about that,” Dietrich said. “I imagine there might be calls that need to be made to loved ones before you sign a list like that, but tonight we vote with our feet.”

Dietrich said a tent city could soon be set up right on the steps of City Hall if there’s no action.

In response to the protest, St. Pete Mayor Ken Welch said more solutions are on the way. Since taking office, he has made housing in the city a priority. One of Welch’s first moves as Mayor was to create the position of assistant administrator for strategic initiatives. He appointed Neighborhood Affairs Administrator Rob Gerdes to the position with the task of first addressing the city’s housing crisis.

“Already, we have updated our down payment assistance program to provide additional assistance to first-time homebuyers at or below 80% and 120% of the area median income and are analyzing results of the Harvard Kennedy School students’ affordable housing study,” Welch said. “We expect to announce additional programs in the coming weeks.”