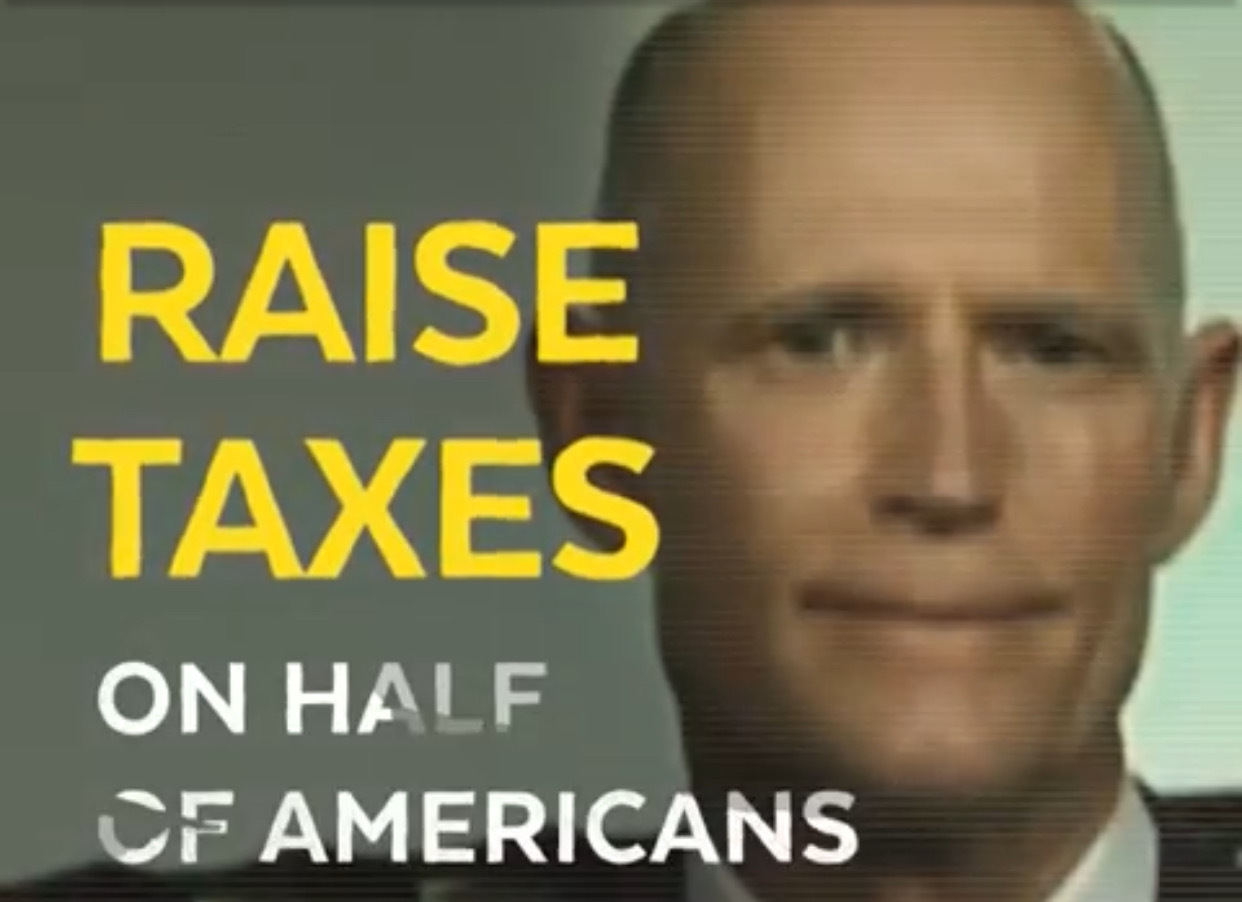 The DSCC ad will run in Washington ahead of a Scott speech Thursday.

The Democratic Party continues to smell blood in the water when it comes to Sen. Rick Scott and his plan to “rescue America.”

As reported by POLITICO Thursday morning, the Democratic Senatorial Campaign Committee (DSCC) is expanding its targeted ad buy with a spot bashing Scott in Washington, ahead of a Scott speech to the right-of-center Heritage Foundation in the afternoon.

“It’s in the plan,” the new video from the DSCC, spotlights a Scott interview on Fox News Sunday, where host John Roberts grilled the Senator about aspects of his 11-point plan.

Roberts raised the prospect of the plan raising taxes on lower-income Americans and setting the stage for a potential sunset of safety-net programs, namely Medicare, Medicaid and Social Security.

“It’s not a Democratic talking point. It’s in the plan,” Roberts said.

Scott’s responses to Roberts’ questions were not in the spot, but they were worth noting.

On taxes: “Here’s what’s unfair: We have people that don’t, that couldn’t go to work and have figured out how to have government pay their way. That’s not right! They ought to have some skin in the game. I don’t care if it’s a dollar. We ought to all be in this together.”

Scott was also emphatic in saying he doesn’t want to sunset the entitlement programs.

Of course, it’s not just Democrats dissing the Scott plan. Minority Leader Mitch McConnell denounced it during a press conference at the Capitol where Scott was present, saying it would not be part of the Republican agenda and incorporating what Scott calls “Democratic talking points” in his critique.

In the wake of the Sunday interview with Roberts, Scott has been asked critical questions about the proposal, and continues to try to walk back the perception that the richest man in the Senate is seeking to extract more money for federal coffers from the poorest Americans.

“There’s a lot of people that could work and decided not to work because they’ve figured out how to live off government. And we have a bunch of people that are out there, they’re working hard and paying their income tax, their property tax, their sales tax. We have retirees that paid in. And it’s not fair that we have people that, you know, just want to live off government. We can’t do that,” Scott told Leland Vittert on NewsNation Wednesday night.

Scott’s Senate office is decrying the political attacks from Democrats.

“Senator Scott is a tax cutter—always has been, always will be. He cut taxes more than 100 times as governor of Florida and he’ll put his record of cutting taxes up against anyone in congress. But now Chuck Schumer and the Democrats are faking outrage about his plan,” asserted McKinley Lewis.

“The DSCC has been irrelevant for years so we couldn’t care less what they waste their money on. The Democrats’ agenda – skyrocketing prices on gas and everyday goods, appeasement, systemic socialism, open borders – is hurting American families. That’s exactly why Senator Scott’s plan is resonating with the American people. Democrats can keep playing DC games on the deck of the Titanic; Senator Scott will keep talking to and fighting for American families,” Lewis added.

Meanwhile, the Democratic National Committee took the unusual step of sending out a press advisory for the Scott speech.

“Scott – the top Republican in charge of electing Senate Republicans – will hold an event at the Heritage Foundation to highlight the Republican agenda to sunset Social Security and Medicare in five years and raise taxes on half of Americans, including seniors and retirees,” read the advisory from the DNC War Room.