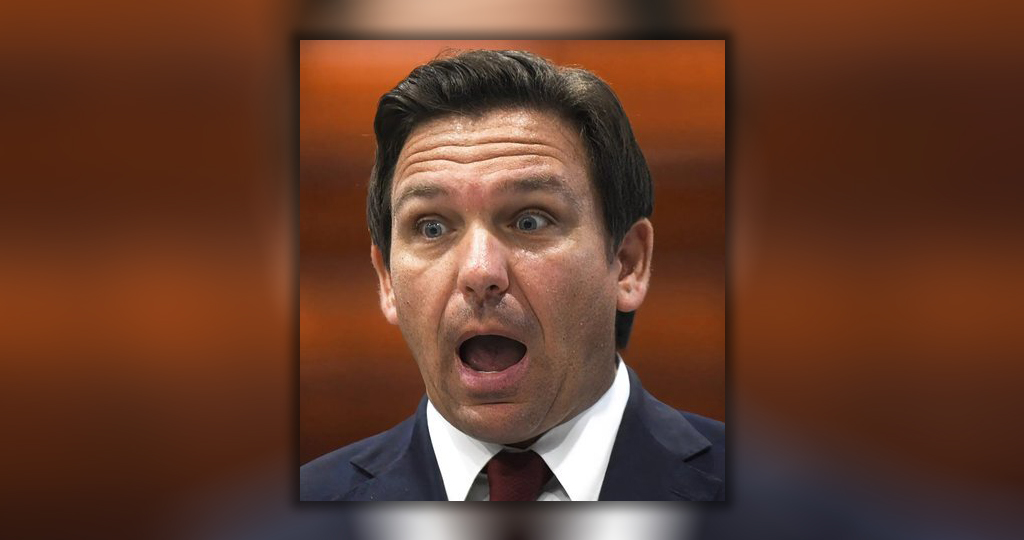 Against all hope, Abraham in hope believed.

The re-election of Ron DeSantis as Governor of Florida in November is inevitable, merely a way station on the road that leads to the White House in 2024.

Or so Christina Pushaw, his in-house Twitter troll pretending to be a press secretary, her army of flying monkeys, and Republican sycophants ranging from QAnon peckerwoods with more tattoos than teeth to elected officials with steroidal ambitions and stunted principles would have us believe.

And make no mistake about it: Tater is currently in tall cotton.

(I call DeSantis “Tater” because his not-so-svelte morphology and less-than-scintillating personality invariably remind me of the look — and likability — of a tater.)

He leads his most formidable Democratic opponent — former state Senator, former Education Commissioner, former Attorney General, former Governor, and current Congressman Charlie Crist — by eight percentage points (give or take) in most recent polls. And he is awash in campaign cash, thanks to the adulation of the MAGA minions across the country who see him as the putative successor to The Donald, who though still formidable by any reckoning, may — may, mind you — be starting to feel the effects of political gravity.

But this is where the storied wisdom of Ben Franklin counsels caution. The inevitable is almost never inevitable. In fact, the author of Poor Richard’s Almanack famously said nothing is certain but death and taxes.

Tater’s re-election is neither.

Politics is a volatile business.

I went to bed one night in 1990 when I was the manager of Gov. Bob Martinez‘s re-election campaign with our internal polling showing the Governor a solid 10 points ahead of Bill Nelson, the presumptive Democratic nominee.

I went to bed the next night with him 20 points behind the ol’ He Coon, Lawton Chiles, who entered the race that day.

And I am old enough to remember Colorado Sen. Gary Hart, who with apparently unstoppable momentum was rolling toward the 1988 Democratic nomination for President when reporters from the Miami Herald caught him whiling away the night in his D.C. townhouse with a young woman who was not his wife. And that was that.

Now I ain’t saying Lawton is going to rise from the grave and put Tater down, although I would pay good money to see him walk up one side of Tater and down the other. And I am certainly not saying Tater is anything other than the uxorious husband he appears to be.

(I’m not even “just asking questions,” which is the fig leaf behind which Pushaw, Tucker Carlson, and other shameless right-wing provocateurs hide whenever they want to slime someone without stepping up and owning it.)

I’m just saying that the unexpected can happen and (not infrequently) does, as Hillary Clinton, who had a consistent lead in the 2016 presidential campaign similar to Tater’s lead in Governor’s race today, can bitterly attest.

For example, Trump could decide that Tater is getting too far above his raisin’ and, with 2024 in mind, go off on him as only a miffed megalomaniac can when he feels disrespected (e.g., Mitch McConnell, Mike Pence, Brian Kemp).

Trump made him; Trump could break him.

Or the war in Ukraine could develop in ways that would rally the nation to the flag and to commander in chief Biden as has traditionally been the case in times of war, with the beneficial effects cascading down the ballot as far as Florida.

Tater and his crew obviously sense this particular risk, as evidenced by their refusal to go all-in against Putin and all-out for Ukraine in what is turning out to be an epic struggle of good against evil. Instead, they are hemming and hawing, trying to gauge the ultimate direction in which the wind is going to blow and how hard.

Or enough people could finally just get sick and tired of Tater’s bellicose self-righteousness, his relentless stoking of outrage and anger about this, that, and whatever, and his cynical exploitation of the resulting fear and division for his personal political advantage.

Admittedly, a game-changing Trump meltdown, a Biden resurgence that floats downstream Democratic boats, or a long-overdue anti-Tater gag reflex among the public are not likely, but neither are they impossible, nor even improbable.

But those are just three foreseeable disturbances in The Force that could discomfit the Dark Side. The things that cannot be foreseen are usually more dangerous than those that can.

Against all hope, Abraham in hope believed. Florida Democrats should do the same. He needed a miracle. They just need a break.