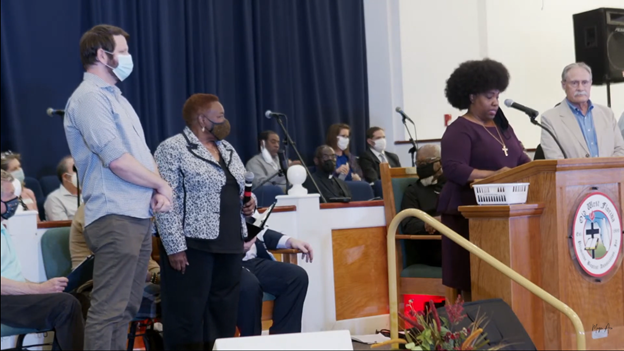 Tallahassee and Leon County elected officials were placed on the hot seat Tuesday when they were asked to make commitments to strategies to fight gun violence and build affordable housing during an event thrown by a coalition of 19 local congregations.

The event was organized by the Capital Area Justice Ministry (CAJM). It took place at the Old West Florida Enrichment Center and more than 600 people attended. During the 90-minute event, Ministry leaders asked the officials one at a time whether they would back or champion initiatives to boost civil citations for minors, invest millions into programs to fight gun violence and start an affordable housing trust fund.

The evening started off uncontroversial, with all of the city officials agreeing to invest $1 million a year over five years to stop gun violence. However, there was disagreement among the Commissioners on whether to champion the affordable housing plan put forward by the Ministry.

CAJM’s plan involves the City Commission launching a trust fund that targets the creation of rental units for very low to extremely low-income households, specifically families paying more than 50% of their income on rent. CAJM said their analysis of data provided by the city found that 15,000 families in Tallahassee are currently paying more than 50% in rent. The Ministry also contended that few of the affordable housing rental units in the city’s current development pipeline would offer housing affordable to those families.

The plan would ask the Commission to seed the fund with $12 million in 2022 American Rescue Plan dollars, and develop one or more revenue streams to generate at least $5 million a year for the fund.

Ultimately, Matlow and Porter committed during the event to champion the plan, while Dailey, Williams-Cox and Richardson did not support it. Those who supported it were met with thunderous applause and cheers from the audience, while those opposed were met with heckles, although Ministry leadership asked the audience to be silent when the officials did not support the plan.

Dailey said he could not answer “yes” or “no” to their proposal because it would require millions in budget and American Rescue Plan reallocations, some of which is already tied up in contracts to create other programs to provide rental assistance and combat other issues. He also said the city is planning on putting 1,700 low-income rental units online this year, more than in the previous decade.

“Affordable housing has been a priority of the city of Tallahassee since we have been elected. It is one of the top points of our strategic planning. We all share similar goals but it is a deeper conversation,” Dailey said.

Moderator Bob Deyle of the Unitarian Universalist Church told Dailey on stage that the Ministry believes only 10 or so units annually are being added that could be affordable to very low to extremely low-income households. Deyle gave $500 to both Matlow’s and Williams-Cox’s campaigns in 2018, as well as $250 to Porter’s campaign in 2020.

During her comments, Williams-Cox questioned that data.

“There is a better strategy that I will champion,” Williams-Cox said. “I’m happy to meet with anyone who wants to meet to talk about what we can do. But I cannot stand here and say that your strategy is the only strategy. There is so much more we can do.”

After saying he would support the Ministry’s plan, Matlow said the issue is personal to him.

“I was raised by a single mother of four children not far from here. Had it not been for public housing, had it not been for the resources made available, I wouldn’t be standing here today,” Matlow said. “We spent billions of dollars on parking garages and road projects and stadiums. It’s time for our No. 1 priority to match the No. 1 need in our community.”

Porter said she felt supporting a plan from organized voices like the Ministry is the type of thing she was elected to do.

“I understand the challenges that we face as a community. And I also understand that we are not a poor community, we have over a billion-dollar budget. That is a reflection of our priorities,” Porter said. “I do believe that we can make this happen one way or another, with your help.”

Another issue that saw disagreement from an elected official was on the Ministry’s goal to, by next year, have 80% of children eligible to receive civil citations for crimes or infractions receive them instead of going to jail. The Leon County Sheriff’s Office gave 54% of eligible children a civil citation last year, while the Tallahassee Police Department number was at 34%.

The Ministry asked Campbell whether he would commit to developing a screening process to ensure juveniles who are eligible for a civil citation receive one. Campbell said he would not override the decision of officers to not issue one but will be committed to continuing to offer his office’s diversion program to juveniles that are arrested.

“We have never turned down a civil citation and I can’t undo what’s already been done. But I can divert them to diversion and I’ll agree to do that,” Campbell said.

Deyle concluded the evening by saying the Ministry will follow up with the elected officials, law enforcement and city and county staff to continue pushing for their solutions.

“We did not get what we were looking for tonight from three of our Commissioners. We are, as I said, disappointed but not deterred,” Deyle said.

A video of the event can be watched here.