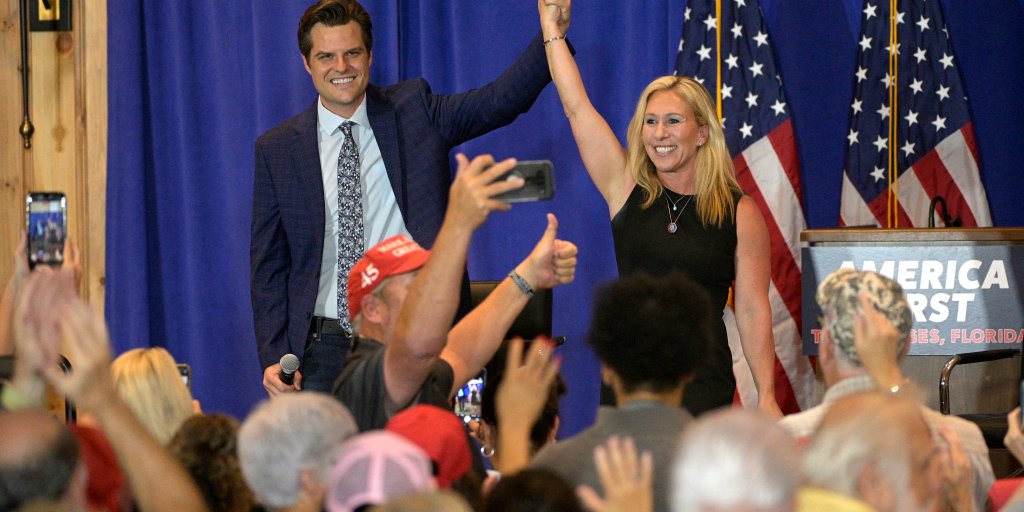 'We only have one national anthem and I'm not a racist.'

Amid a push to make official the status of “Lift Every Voice and Sing” as the national hymn, two Republican members of Congress dismissed the notion Thursday.

The bill (HR 301) cleared the House Judiciary Committee this week, and appears likely to pass on the floor of the House of Representatives this month. But not with “yes” votes from Gaetz or Greene.

“My belief is that we are one country,” Gaetz said. “We pledge our allegiance to one flag. We sing one anthem. I pray to one God, other people might not, but that’s my thing.”

Gaetz dunked on Judiciary Chair Jerrold Nadler, saying that he should have “demanded that he sing the Black national anthem for us.”

“He would need the sheet in front of him,” Gaetz crowed.

Greene offered her own hot takes explaining her “no” vote on the House resolution.

“We only have one national anthem and I’m not a racist. So I don’t know why I need — why we need to elevate one race over the other. We’re all one nation under God. And that’s the only anthem. We have one flag. And that’s what’s being anti-racist, when we don’t divide ourselves into groups, into races, into identities, ideologies, genders, 50 genders or whatever there may be. That’s how we avoid those things, by being one nation with one flag and one anthem.”

“What about ‘Amazing Grace’? That’s a song people know,” Gaetz agreed. “A hymn implies an element that is maybe not fully reflected here.”

Gaetz and Greene urged a poll on “whether or not it’s beloved” at all, with the latter suggesting “most people have no idea what it is” about the song.

During previous House hearings, people testified to the specific meaning of the song, and its importance for Black Americans historically and in the present day.

Dwandalyn R. Reece of the National Museum of African American History and Culture described the groundswell the song created in the Black community in the decades it became central to cultural canon.

“It quickly began to make its way through communities in the North and South. It received a public endorsement by Booker T. Washington, president of Tuskegee University, and by 1919 had been designated as the official song of the NAACP. By the 1920s you could find copies of the song inserted or pasted into the hymnals of Black churches across the country,” Reece asserted.

NAACP Board of Directors Chairman Leon Russell noted that advocates “do not call for this great hymn to supplant or replace the national anthem.”

“Although the song speaks to the Black experience, any American who has experienced oppression can relate to its words. Although written in the heart of Jim Crow America, it was adopted as the NAACP hymn at a time when on average three to five Blacks were lynched every day in this country, the song admonishes us not to lose faith. It inspires us to be uplifted,” Russell said.