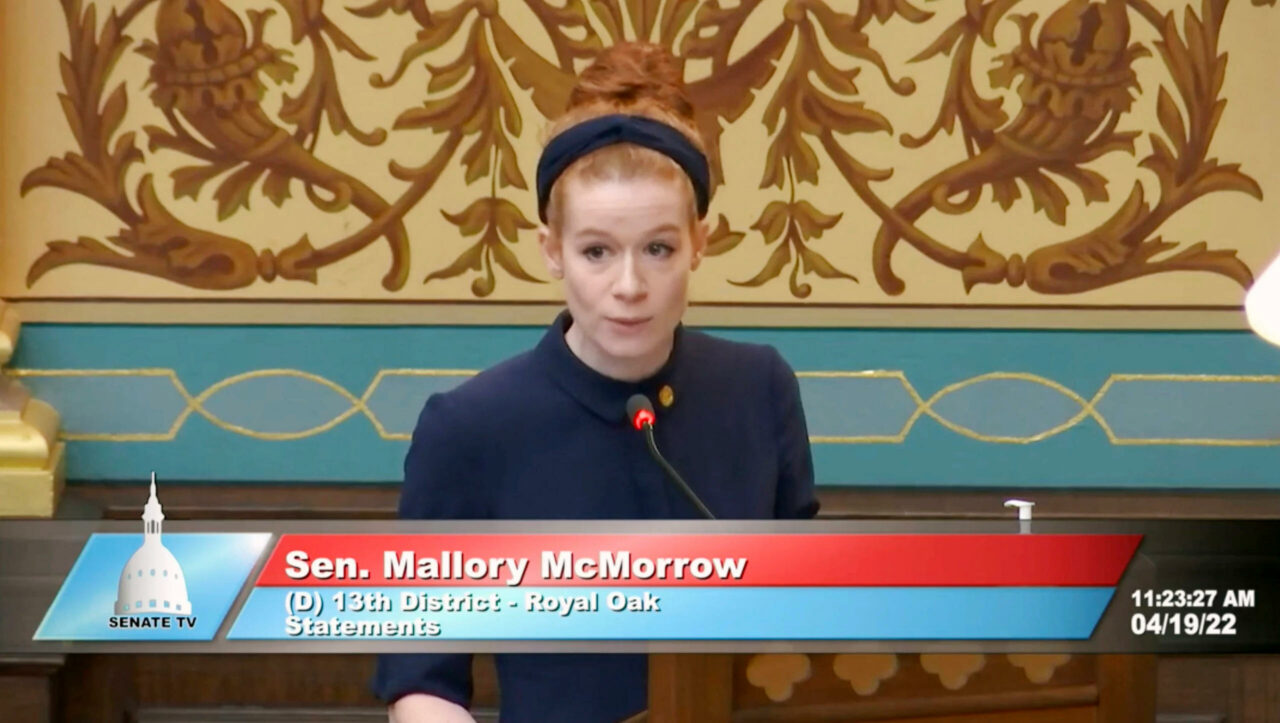 'Hate wins when people like me stand by and let it happen. I won't.'

A speech on the floor of the Michigan State Senate by an, up until now, little-known state Senator named Mallory McMorrow is going viral. Over 9-million views so far. It’s not your typical partisan rant.

“I am a straight, white, Christian, married, suburban mom,” McMorrow proclaimed in a fiery five-minute speech. “Who knows that the idea that learning about slavery and racism means that children are being taught to feel bad or hate themselves because they are white is absolute nonsense.”

McMorrow says she was responding to a Republican colleague who accused her in a fundraising email of “grooming and sexualizing children” and “wanting children to believe they were responsible for slavery and feel bad about it because they’re white.”

It should because the attack comes right from Gov. Ron DeSantis‘ playbook. It’s worked for him up until now in Florida and is being copied across the country because it’s red meat to those in the Republican Party base who are homophobic and racist. And it’s worked because all the Democrats seem to be able to do is call it out as mean.

McMorrow brilliantly cuts to the chase in a way I hope resonates with both Democrats and Republicans who may well agree with her but are increasingly turning off all the noise and just trying to get their kids to soccer practice while dealing with the rising cost of living.

But stop for a moment and consider what she said. “I learned that service was far more important than performative nonsense like being seen in the same pew every Sunday or writing ‘Christian’ in your Twitter bio and using that as a shield to target and marginalize already marginalized people,” McMorrow said.

“People who are different are not the reason that our roads are in bad shape after decades of disinvestment or that health care costs are too high or that teachers are leaving the profession.”

I’m a straight, white, Jewish, married, suburban dad. If you want to talk about family values, let’s go. My wife and I have raised two incredible children. And we’ve taught them their happiness and success in life are not threatened by those who look different than they are, come from a different place, or love in a different way. We reject voices of intolerance, whether they come from the right or the left.

My wife and I agree with actor/wrestler John Cena who recorded a PSA a few years ago in Tampa for the Ad Council, saying “Patriotism shouldn’t just be about pride of country. It should be about love. Love beyond age, disability, sexuality, race, religion and any other labels. Because the second any of us judge people based on those labels, we’re not really being patriotic, are we?”

You want to accuse me of being part of the woke crowd? Go ahead and try. I’ve spent my career as an investigative journalist bringing corrupt politicians to justice, uncovering that one of the nation’s biggest defense contractors was letting defective parts get onboard military helicopters. I’ve taken on the mafia. I’ve brought a pedophile priest to justice.

I’ll put that record up against anyone claiming some kind of moral righteousness because they stopped a teacher from saying the word “gay” or banned a math book or barked at a kid standing behind them for wearing a mask at a news conference.

Yes, our nation is in mortal danger. But not because of the gay kid or teacher teaching history. Not because of the immigrant. Not from those seeking equal justice under the law or from cops risking their lives to keep our neighborhoods safe.

Our nation is in mortal danger because of those exploiting people’s prejudices and fears. And it’s up to those of us across the political spectrum, Republicans, Democrats and Independents, to stop them. We stop them by not giving money to their political campaigns. We stop them by supporting candidates that share the simple truths that Sen. McMorrow of Michigan described so well.

“Hate wins when people like me stand by and let it happen. I won’t.”

Alan M. Cohn is a Peabody Award-winning investigative reporter and was the 2020 Democratic nominee for Florida’s 15th Congressional District.