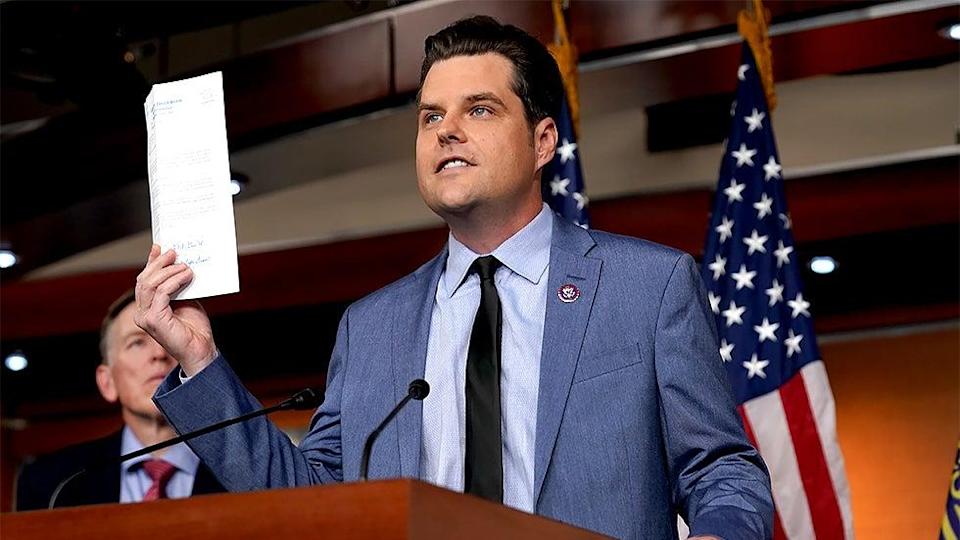 'You are a traitor to the Constitution, the Second Amendment, the Fifth Amendment.'

Red flag laws allowing relatives to ask law enforcement to remove guns from a person who might be a danger to themselves or others are again being debated in the wake of a mass shooting at a school. Once again, the issue is splitting Florida Republicans.

One faction touts them as a useful tool to keep firearms away from dangerous people and prevent mass shootings. Another sees them as a lever of control ripe for abuse that violates gun owners’ rights.

“If you back red flag laws as some reflexive response to some emotion that you have, you betray your voters,” Gaetz said in remarks addressed to Republicans in the U.S. Senate during a U.S. House committee hearing last week. “You are a traitor to the Constitution, the Second Amendment, the Fifth Amendment; you do nothing to make mass shootings less likely and you put a target on the back of your constituents.”

The hearing was held in response to the mass shooting at a school in Uvalde, Texas that left 19 fourth graders and two adults dead.

Gaetz’s remarks were aimed at his own GOP Senators, Republicans Marco Rubio and Rick Scott, who support a bill encouraging states to adopt their own red flag laws.

Rubio is the main sponsor, and originally filed it in 2018 after the mass shooting at Marjory Stoneman Douglas High School in Parkland left 17 dead, including 14 children. The bill would set up a grant program at the Department of Justice, giving states money to fund law enforcement agencies tasked with conducting the emergency protection orders, or warrants allowing police to remove guns from a person suspected of harming themselves or others in the near future.

Scott was Governor when the Parkland massacre took place on Feb. 14, 2018. In the aftermath, he helped forge a compromise bill that included some gun control measures, threw hundreds of millions of dollars at school safety and mental health programs and installed a red flag law. He sees Florida’s law as a model for other states to follow but doesn’t want to tinker with federal gun laws.

“Sen. Scott is not working on federal gun legislation. Sen. Scott believes in the Second Amendment and protecting the rights of law-abiding citizens,” Scott spokesperson McKinley Lewis wrote in an email.

“He encourages every state to look at the targeted action he took in Florida following the tragic shooting at Parkland to make our schools safer and keep weapons out of the hands of people who are mentally unstable, and who pose an imminent threat of violence to others or themselves and determine what works best for their state.”

The Florida law has been used more than 5,000 times in four years.

Although Gaetz represents a hard-line faction of Republicans in the U.S. House popular with base GOP voters, there’s another constituency heavily courted by Republicans over the last two years that welcomes the red flag laws: law enforcement.

DeSantis, though, hasn’t commented specifically on the value of Florida’s red flag law. As a candidate, DeSantis said he would’ve vetoed the school safety bill Scott signed because of the gun control measures it contained. A spokesperson for DeSantis did not respond to an email seeking comment this week.

Yet Gaetz was a close adviser to DeSantis before an FBI investigation into whether Gaetz had sex with an underage girl was revealed last year. No charges have been brought against Gaetz, who has denied any wrongdoing.

“This isn’t just about guns, it’s about power,” Gaetz said. “And what the Democrats want is to ensure that the government has the power to take your guns away without giving you due process. Shame on any Republican in the Senate that would pave the way to that type of deprivation of our liberty and our constitutional rights.”

previousSunburn — The morning read of what’s hot in Florida politics — 6.9.22