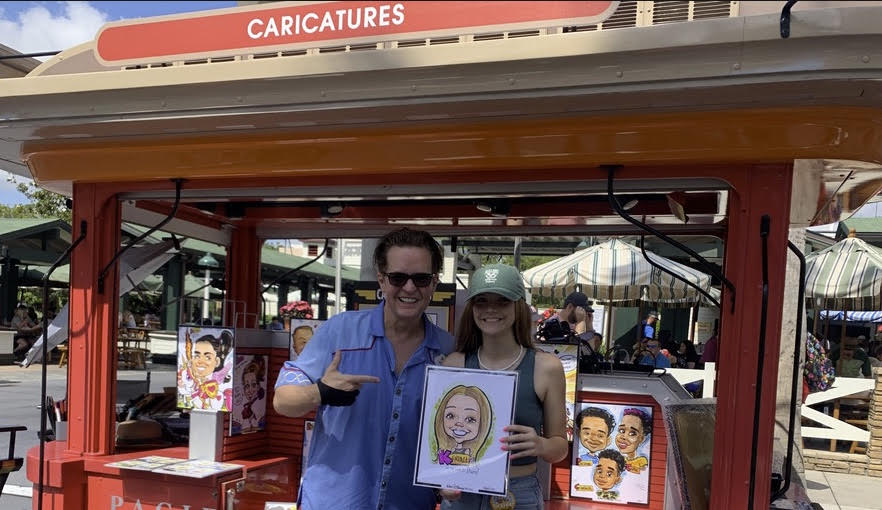 For nearly 30 years, Keelan Parham has drawn faces at Walt Disney World. Enough time has passed for mullets to be in style, fall out of favor and then come back into fashion again.

Tourists and locals, even the occasional celebrity, saw caricatures as the perfect souvenir, something hand-drawn and one of a kind. Parham figures he’s illustrated at least half a million people during his career.

“I just kept doing it,” Parham said. “The reason is, because every person that sits down, every face is a new challenge. … It truly never gets old. … I think there’s beauty in everybody’s face.”

His job is to capture it on paper.

Parham’s resume was colorful — model, Elvis impersonator, lifeguard — when he answered an ad in the Orlando Sentinel for a job as a Disney caricature artist in the early 1990s. He was also professionally trained as an artist with an illustration degree from Savannah College of Art and Design. It’s where a kid like Parham growing up in the South who inhaled comic books and loved to draw went to study.

Parham landed the job at Disney. He figured he might last a week or so and then quit.

“I did not like it. I didn’t like the possibility of rejection,” Parham said. “Sometimes people see themselves differently than everybody else sees themselves. So I had to find a style that both captured their likeness, but they liked it well enough to purchase.”

Parham didn’t quit right away. In fact, quite the opposite. Twenty-nine years later, he remains at Disney.

“I get to draw at the Happiest Place on Earth. There’s very few times when I’m drawing somebody who is not happy,” he said.

Parham’s work as a caricature artist has evolved into being an entrepreneur. He and his wife, Barbara, founded Artistic Talent Group and began partnering with Disney in 1999. Today, their business hires about 50 artists who draw at Animal Kingdom, Hollywood Studios, several Disney resorts and The Art Corner, which is their shop at Disney Springs.

Sometimes, you can spot Parham and his team of artists at the festivals in Epcot, like this year’s upcoming International Food and Wine Festival where they will be drawing “corktoons” — caricatures drawn on wine corks.

Parham’s business also is hired to create art for events and parties. Parham has been asked to draw at a recent Visit Orlando-hosted event, a mortuary convention, a birthday party for a Saudi Arabian princess, a body-building contest and everything in between. Parham also has drawn regularly for families and patients at Orlando Health Arnold Palmer Hospital For Children.

Some of his customers have been famous, although Parham has a knack for missing out. Singer Usher and boxer Evander Holyfield both sat down for a cartoonish portrait at Parham’s stands.

“I haven’t really drawn that many famous people, to be honest with you. It always seemed like it would happen on days I wasn’t at the stand,” Parham said. “My biggest claim to fame was drawing a monkey that was on the David Letterman Show,” he joked.

One customer was a 7-year-old boy with a vivid imagination who was on a Disney vacation with his family. The boy hung his cowboy-themed caricature on the wall in his bedroom in Pineville, Kentucky and returned every year to get another one.

That boy grew up to be 19-year-old Braden Mills, who convinced Parham to hire him as an artist. On Wednesday, Mills manned the caricature stand at Hollywood Studios in front of the Tower of Terror ride.

“I’d never thought I’d be here,” Mills said, marveling at how he was doing what he loved: drawing at Disney.

previousAmerican democracy is in danger, and we’re running out of time to save it