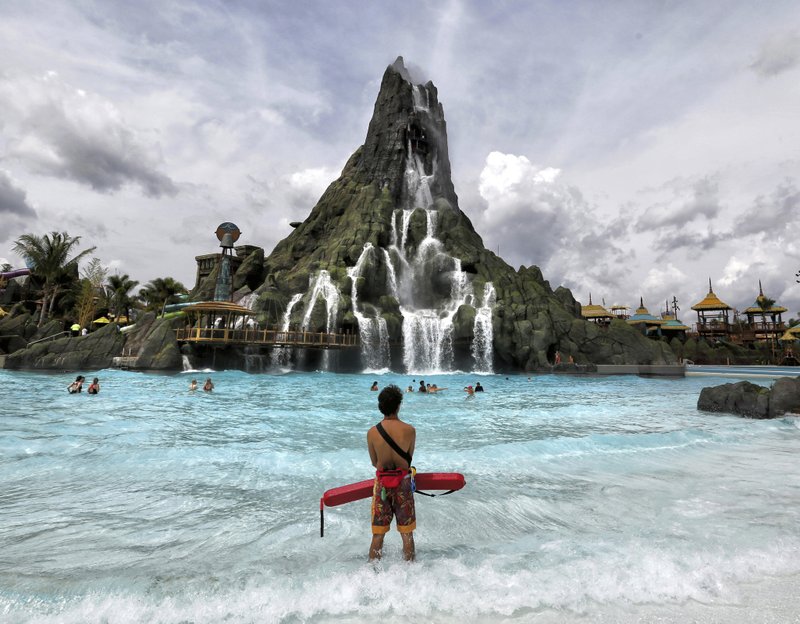 'At a minimum, its reckless decision to keep the slide open while it failed to implement safety measures, in the name of its profits.'

It was supposed to be one of the last rides Danielle Tolman went down on the final day of her vacation at Universal’s Volcano Bay water park in 2018.

The St. Johns County resident laid on her stomach and went headfirst on a mat down Punga Racers — a waterslide with a long history of problems — and suffered a head injury that changed her life, she said in a new Orange Circuit Court lawsuit filed this week against Universal seeking more than $100,000.

“Mrs. Tolman was sliding headfirst on the mat provided when the mat unexpectedly went straight up, causing Mrs. Tolman to strike her head on the tunnel, then came back down and she continued down the slide. As the mat rounded a curve to the right, Mrs. Tolman again hit her head,” her lawsuit said.

The head injury left her unable to drive or take care of her home and cost her a job, the lawsuit said.

Less than a year later in July 2019, New York tourist James Brown, went down the same slide and broke his neck. He was temporarily paralyzed and unable to move face down in the shallow water until he was rescued.

Bowen also sued Universal and settled for an undisclosed amount in 2020. A judge had ruled Bowen was eligible for punitive damages.

Bowen’s lawsuit had unearthed depositions with Universal employees and company documents that made it clear there had been a history of riders’ injuries on Punga Racers since the slide opened at the brand-new water park in 2017.

Universal employees had discussed what they did to fix the ride as the injuries — like people suffering nosebleeds, scrapes, chipped teeth or worse tallied up. At least 115 people reported various injuries, court records showed, the Orlando Sentinel reported at the time.

To slow the ride down, the ride manufacturer modified the slide and extended the tracks on two of Punga’s four slides five months after Punga opened, according to a court filing from Bowen’s lawsuit. Court documents said one problem with Punga was its run-out for riders to slow down and come to a full stop in the catch pool was considerably shorter compared to other waterslides.

After Bowen was hurt, Universal added a weight restriction of 150 pounds — which might limit many teenagers and adults from riding it.

Finally, Universal reopened the ride in 2020 and changed it entirely so riders no longer used mats and went down feet first instead.

Tolman argued when she rode it in 2018, “Universal had actual knowledge that Punga Racers and the way Universal operated it were dangerous, that there was a high probability that injury would result to Punga Racers riders, and despite that knowledge, Universal decided to keep the slide open to its guests without any safety measures,”

Her lawsuit attacked Universal for not closing the ride completely.

“At a minimum, its reckless decision to keep the slide open while it failed to implement safety measures, in the name of its profits, constitutes gross negligence,” her lawsuit said.

There was no mention of Tolman getting hurt on Punga Racers on the state’s quarterly theme park injury report. Universal and the other major theme parks are supposed to self-report visitors’ injuries that occur on the rides if visitors are hospitalized for at least 24 hours. Tolman’s lawsuit says she had “substantial hospitalization” but does not provide details on her medical care. Her lawsuit said she was hurt around 5 p.m. on Aug. 27, 2018 and returned back to St. Augustine that same evening, which implies she did not spend an immediate 24 hours in the hospital.

Universal did not immediately respond to a request for comment. Tolman’s attorney, who is on vacation, could not be reached.