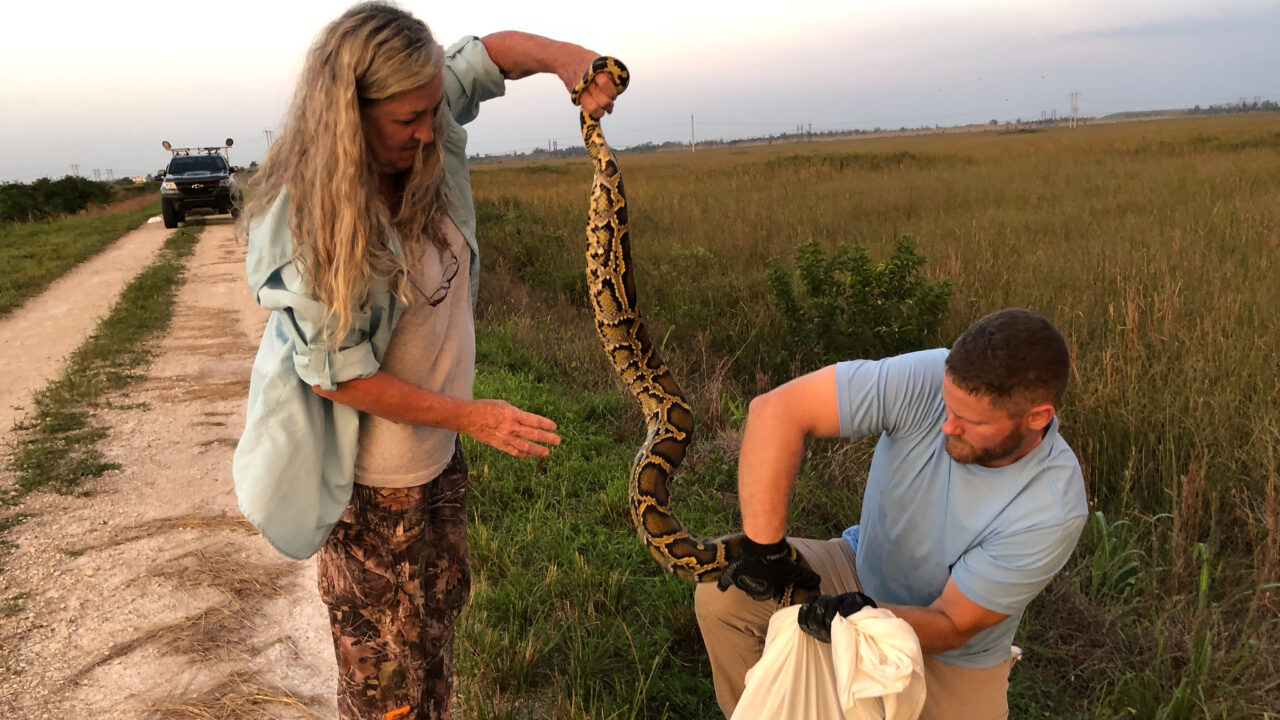 'One of these pythons, we made into a pair of cowboy boots.'

The weird, wild, brave and foolhardy are geared up and moving through inland Florida’s dense vegetation to compete against each other, monstrous snakes and mortal danger in this year’s Python Challenge.

“From Day 1, the Governor’s been committed to eradicating this python from the Everglades,” Barreto said at the opening of FWC’s annual snake hunt.

“He put his money where his mouth is — he literally called me a couple months ago and said, ‘Tell me what kind of technology we can use to fight the python. Bring it to me, I’ll help support it, I’ll help finance, I’ll help put the money on the table.’ He’s just been so supportive.”

It could also be for the nice swag, of course, for which First Lady Casey DeSantis thanked Barreto.

Barreto was, she said, “instrumental in me getting the Governor our 10-year anniversary present. So, one of these little suckers that (came) out of the Everglades, one of these pythons, we made into a pair of cowboy boots.

“They’re a little loud, but the Governor, if you ever see him wearing python-skin boots, that’s our 10-year anniversary present,” she added.

Before learning of the issue, First Lady DeSantis said she was unaware of the damage invasive pythons do to the Everglades ecosystem, and what it takes to go in and kill and capture them.

“When they’re doing this, they’re doing it with a stick — a long stick, but a stick, nonetheless — and they’re pulling these guys out by their tail,” DeSantis said. “They are committed, just as we are, to ensuring that we are preserving the Everglades better for the next generation.”

The FWC and South Florida Water Management District (SFWMD) co-host the event, which runs Aug. 5-14. The person who captures the largest python gets a $2,500 prize. The one who captures the most pythons gets $1,500. This year, “Alligator” Ron Bergeron of the SFWMD is offering a $10,000 bonus, the First Lady said.

The event is more flash than substance, though, as annual challenges haven’t made a significant dent the area’s python population. Last year’s 600 hunters took out 223 pythons, but there are thousands alive. Gov. DeSantis said earlier this year, though, that half of a reported 16,000 pythons removed from the Everglades came under his watch.

“Invasive species are a nationwide problem, for a variety of reasons — from Asian carp in the Midwest, and certainly here in Florida we see a lot of invasive reptiles, and the python is kind of the flagship for that,” FWC Executive Director Eric Sutton said.