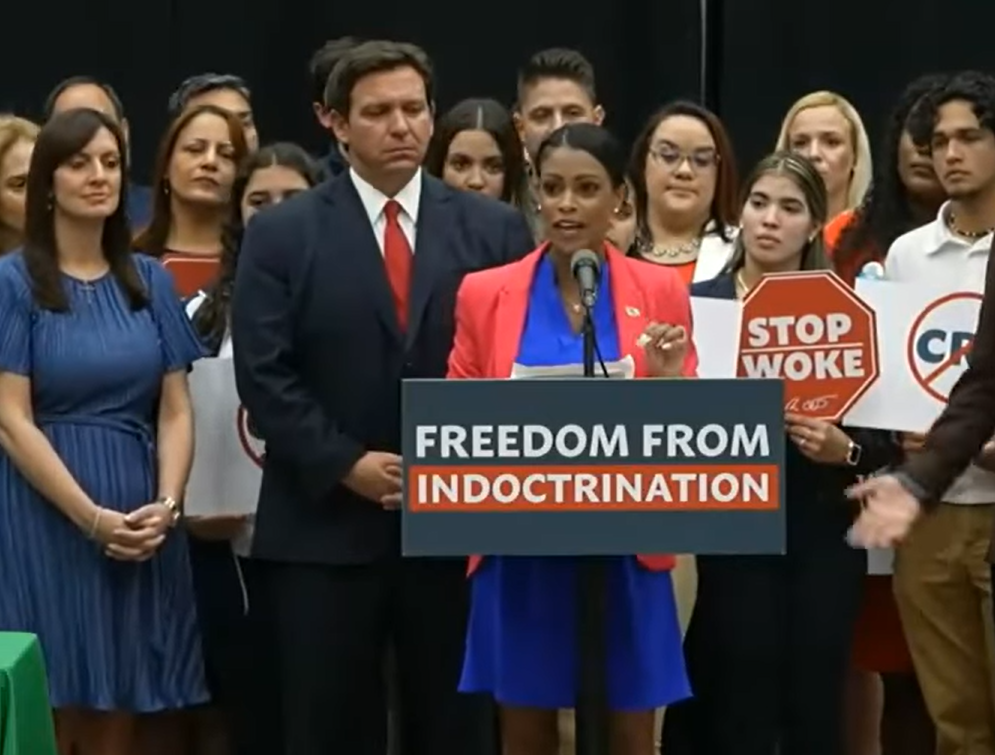 'I am worried. I am very worried because there is so much at stake here.'

Gov. Ron DeSantis has broken the mold for endorsing candidates in local school board races that would connect to his conservative ideology, though the boards are supposed to be nonpartisan.

But now that Primary Election Day is approaching Tuesday, Floridians will see if the high-profile endorsements will add a partisan layer to school boards or keep the longstanding status quo.

DeSantis, a Republican, is doing everything he can to get local communities to rally behind some of his selected candidates — likely a way to block school board candidates who, according to the Governor, are progressive to leftist.  Over the weekend, DeSantis attended the campaign rallies of several local board races that he has endorsed over the past few weeks. In all, DeSantis has endorsed 30 candidates, according to his political campaign at rondesantis.com.

Sunday, DeSantis’s campaign Twitter page posted a photo of himself at a campaign rally in Sarasota, with the comment: “Sarasota County parents are ready to elect school board members who are going to ensure our schools provide a great education for our kids, not a woke indoctrination. Thanks to all who came out to join us today!” He had a similar Twitter campaign post for Volusia, Miami-Dade, and Duval counties.

“To my knowledge, we’ve not seen a Governor travel the state and hold rallies for local races other than for the state legislature,” said Andrea Messina, chief executive officer for the Florida School Boards Association. “I’ve not seen that level of involvement and engagement from the executive office until this year.”

“We have seen before, the Legislature, multiple times, over the last few years, introduce legislation to make school board seats partisan. We know that that is something that has been on the agenda for a while…. I’m confident we will see it again this Session,” Messina told the Phoenix.

She continued: “What you’re seeing right now, because it’s still nonpartisan, there’s still some degree of holding back. But if we had partisan elections, you would see more activity, more direct activity, by both political parties in those school board elections … I believe we would see more partisan positions in policy and in school board discussions and debate — more open party-affiliated positions.”

But some worry that DeSantis’ endorsements set a “dangerous” precedent, such as Robin Taub Williams, a former educator and president of the Democratic Public Education Caucus of Manasota, which focuses on education concerns in the Manatee-Sarasota area. The group has endorsed two candidates for the Manatee school board.

“I would hope in the future that we don’t see governors interfering in local school board elections and using them for culture wars – but that’s what’s happening right now,” Williams told the Phoenix.

Williams stressed that some of the heated and even hostile discussions at local school board meetings in her area, particularly in Sarasota County, are in part due to the education policies pushed by DeSantis and his followers.

That includes efforts to ban books in school libraries through increased parental involvement, limiting certain discussions in classrooms on LGBTQ+ and America’s history, and promoting ‘parental rights’ to decide if a student can wear a mask at school.

Overall, Florida has 67 counties that contain their own school districts. Florida law requires that each school district has at least five school board members, though not every seat is up for grabs this election cycle.

DeSantis’ 30 candidates come from 19 school districts. According to the rondesantis.com campaign, DeSantis chose these candidates because they are “committed to ensuring student success, parental rights, and curriculum transparency.”

Through his political finance committee, each of the 30 candidates received $1,000 from the Friends of Ron DeSantis, as of August 17, based on the Florida election division’s campaign finance data.

In fact, DeSantis and Crist have backed opposing candidates, such as District 6 in Hillsborough County. Crist has endorsed sitting member Karen Perez for reelection. In that same race, DeSantis has backed Aly Legge, who has spoken at some of DeSantis’ news conferences in support of legislation that bans certain teachings of race and gender in Florida’s public schools.

District 2 in Hillsborough also have candidates who have been endorsed by Crist and DeSantis. The Governor’s candidate of choice is incumbent school board member Stacy Hahn. For Crist, he backed a former president of Hillsborough PTA named Damaris Allen, according to her campaign.

District 2 in Indian River County is the last district where Crist and DeSantis have endorsed opposing candidates, with DeSantis backing  Jacqueline Rosario’s re-election to the board and Crist supporting school board-hopeful Cindy Gibbs, an educator.

Because school board races are currently non-partisan, any registered voter, regardless of party, will be able to vote for the school board member of their choice.

The Florida Democratic Party called a Friday news conference over Zoom to urge voters to pay attention to school board races and stress the potential damage of having school board races heavily influenced by high-profile politicians, primarily focusing on DeSantis and his political ambitions.

“Public education will be on the ballot next Tuesday,” said Scott Hottenstein at the Zoom conference. He had run unsuccessfully for a Florida House seat in the past and is the president of the Democratic Public Education Caucus of Florida, which is part of the Florida Democratic Party.

Candidate Justin Kennedy, who is running for a school board position in Volusia County, worries that if DeSantis’ endorsement strategy is successful then other Republican governors will follow suit, he said at the Friday Zoom conference.

One of the speakers at the Friday virtual news conference was Brevard school board member Jennifer Jenkins, who has been vocal about the changing political dynamics. Jenkins is a considered a possible Lieutenant Governor for Crist, if he wins in the Primary and beats DeSantis in November.

“It is a much more hostile environment. You know, politics are really driving the conversation here,” Jenkins said Friday at the virtual conference. She became known over the course of the pandemic, when the Brevard County school board voted to implement mask mandates last fall, even though the DeSantis administration thought that should be a parent’s decision.

Jenkins gained national attention when she wrote an opinion piece published in October by the Washington Post, which outlined some of her experiences of protesters gathering in front of her house to call her a pedophile and burning “FU” on her yard with weed killer.

During the press conference, Jenkins brought up a previous legislative attempt to create partisan school board races, but the bill did not make it through the 2022 Session.

“And now we see Ron DeSantis do what he can to circumvent that fact in order to make these races as partisan as possible,” she said.

previousWhat to watch: Florida's major Primary battles on the ballot