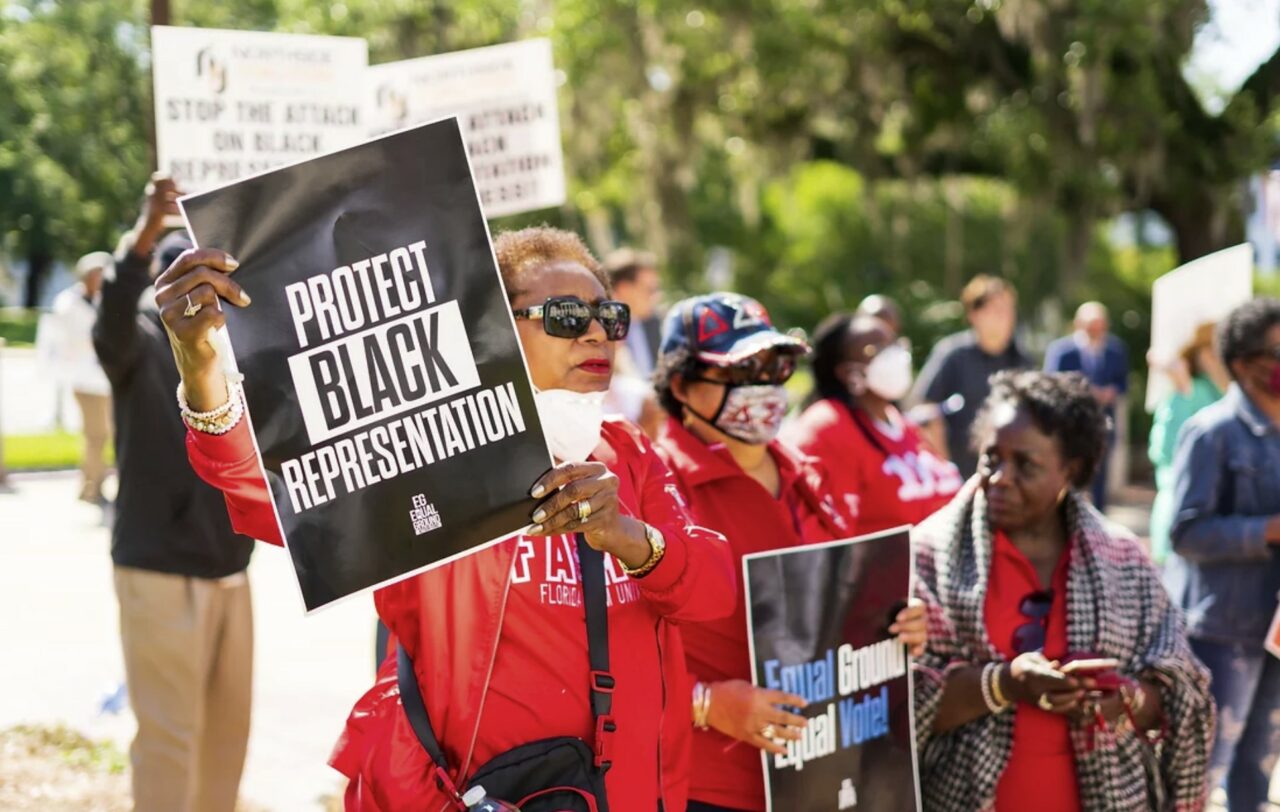 The tour kicks off in Sanford at 6:30 p.m. Tuesday and concludes more than a month later in Jacksonville.

One week after the Primary Election, the plaintiffs in a lawsuit challenging Gov. Ron DeSantis’ congressional map, which erased two Black-performing districts in Florida, are launching a statewide tour to mobilize minority voters in key counties.

Starting Tuesday, Equal Ground is teaming with fellow plaintiffs Florida Rising, League of Women Voters and Black Votes Matter for the ‘We Draw the Lines’ tour. The tour will include stops in six counties the new map impacts over the next month.

The tour’s kickoff event will be at the Sanford Civic Center Annex in Seminole County, followed by a stop at the Smith Center in Orlando on Sept. 7. Both events begin at 6:30 p.m.

During the stops, the groups will speak with voters about the map and provide updates on the history of each district, its current composition and how that compares to its earlier makeup.

The groups will also use each stop to motivate potential voters to cast ballots on or before the Nov. 8 General Election and educate them about critical legal changes, including vote-by-mail strictures and voter registration deadlines.

“It is incredibly important that we talk directly to people, residents and voters because they’re the ones being targeted and because voter data is what determines the makeup of these maps and whether districts will remain whole or move,” said Jasmine Burney-Clark, founder of Equal Ground, a Black-led civic engagement nonprofit.

“The people we’re working with are residents. They’re voters. They’re people who our state is saying aren’t participants in the process but are also the ones most deeply impacted by voter suppression laws that have been passed in this state that almost prohibit their access to the ballot box.”

Event attendees will also learn more about how the Florida Supreme Court in early June declined to hear arguments over the new map, allowing its changes to govern elections this year.

“We want to talk to folks about how important courts matter in this process, not just the courts that will be listening to our case but how the Supreme Court, a court of individuals who are appointed and retained each election cycle of every sixth year, plays a role in our future elections, the map-drawing process and how they allow unconstitutional maps to move forward,” Burney-Clark said.

The lawsuit leans heavily on language in the Fair Districts amendment in the Florida Constitution. The amendment prohibits the drawing of maps that favor or disfavor a political party and protects minority communities’ right to elect candidates of their choice.

In their lawsuit, the groups argue the new congressional map “intentionally favors the Republican Party at nearly every turn” and represents “one of the most extreme gerrymanders in the country” as it violates both requirements set forth in the Fair Districts amendment.

The lawsuit still pends resolution. The groups don’t expect to see the matter settled in the near future, according to said Moné Holder, senior director of advocacy and programs for Florida Rising, a statewide voting rights and grassroots organization focused on empowering Black communities.

“We’re anticipating a longer road ahead,” she said. “As our attorneys prepare for the next steps of litigation, we’re looking at how to continue to build our cases and just hoping to keep the community aware that this redistricting is something we need to address … Black representation matters locally, in our state, across the county and the world, and any efforts to diminish Black voice and representation should not be tolerated.”

Click here for more information on the ‘We Draw the Lines’ tour dates and stops.