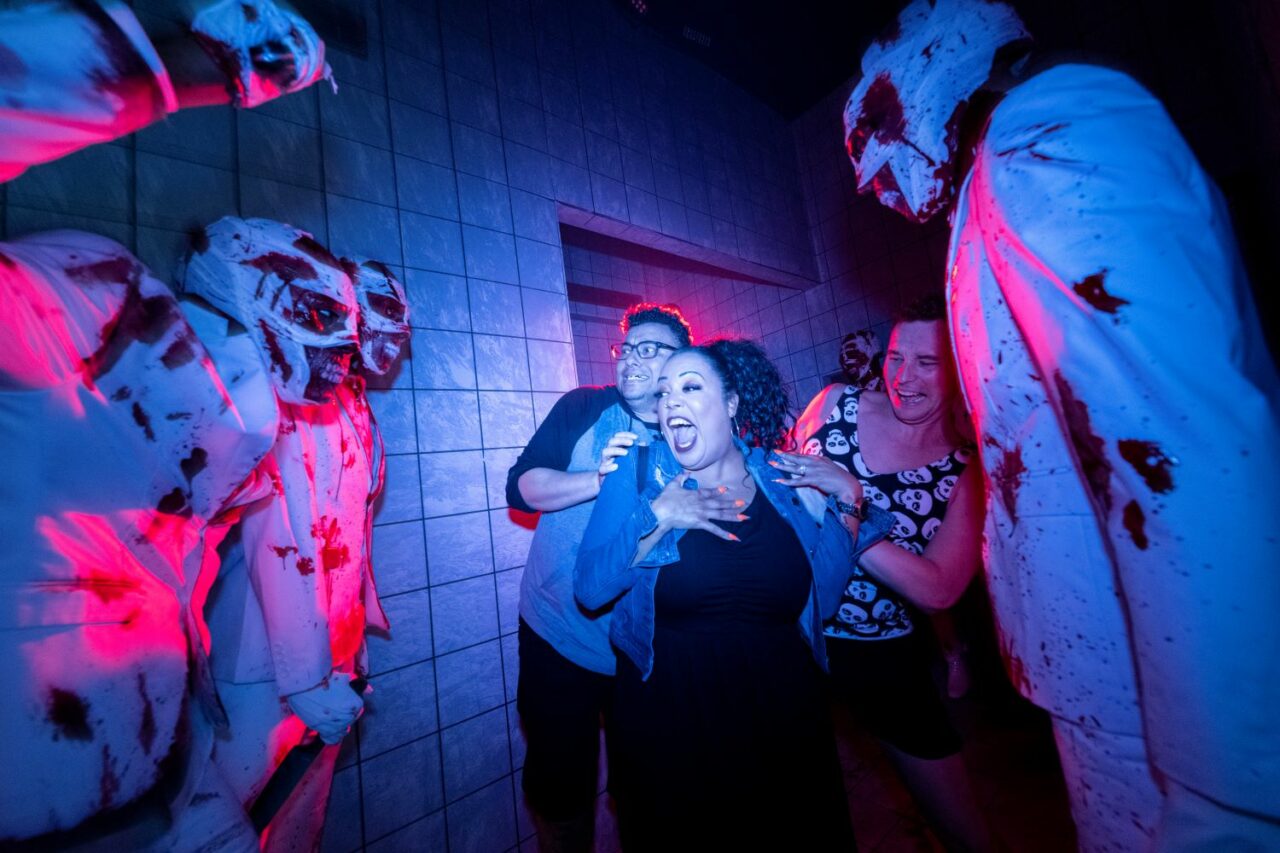 Mournfully, a ghostly woman dressed all in white played on the bow of a ship in a recreated New England fishing village.

Amid the slashers, the snarling animals and the monsters, there was something unexpected at Universal’s Halloween Horror Nights.

Mournfully, a ghostly woman dressed all in white played on the bow of a ship in a recreated New England fishing village.

Eerie and beautiful all at once, it was a show-stopping scene.

Dead Man’s Pier: Winter’s Wake, the haunted house where you can find the violinist, is part of the dark magic of Halloween Horror Nights which runs on select nights through Oct 31.

For Universal theme parks, the Halloween times are a major moneymaker. Even on a recent night when a funnel cloud appeared near Disney World and torrential rain hit the area, that didn’t stop heavy crowds lining up in ponchos for up to two hours for some houses.

Comcast CEO Brian Roberts brought up HHN’s success Wednesday during the Goldman Sachs’ investor conference. The theme parks that once dragged the company’s financials down during the COVID-19 pandemic are now “powering us,” he said.

“We’re playing offense… Clearly, there’s one other company, Disney, that has a fabulous parks business. We’re gaining share,” said Roberts as HHN enters deeper into the Halloween season and Universal is busy building a new theme park in Orlando set to open in 2025 after opening Super Nintendo World in Japan last year.

In Orlando, what it takes to bring HHN to life is months of planning and thousands of employees. The team started developing this year’s 10 haunted houses and five scare zones back in September 2021. Already, the team — which is also responsible for creating the Mardi Gras and Christmas celebrations — is thinking ahead to create original stories for HHN’s 2023 event.

“This year, as Halloween Horror Nights reaches its 31st year, we’re celebrating the holiday that started it all: Halloween (October 31) – so the scare zones and thematic throughout the park lean into traditional Halloween elements like scarecrows, trick or treaters, pumpkins and more, all with a horrifying twist,” said Lora Sauls, a Senior Manager in Creative Development and Show Direction at Universal Orlando.

“Every year we are astounded at the anticipation and excitement from our guests. There’s nothing like opening the park for the first time on opening night and seeing the faces of all of our fans as they enter Halloween Horror Nights.”

Universal’s haunted houses can transform you back in time or to a far-off place. The immersion makes you feel like you truly are in a 1920s speakeasy or stuck in high school in your own nightmare as you cruise past lockers.

One house, in particular, was a surprise, said Matt Roseboom, publisher of Attractions Magazine.

The house based on singer The Weeknd was a success, Roseboom said. Music played an important role in the house that had an unforgettable murderous scene set in a plastic surgery operating room.

“Many fans who were skeptical, myself included, about The Weeknd: After Hours Nightmare haunted house, but it really has a scary but fun vibe to it. After experiencing it, I’d love to see them do a musical house each year,” Roseboom said.

Another house giving people creeper crawlers is Bugs: Eaten Alive which also has gotten a buzz among fans, Roseboom said.

“Just thinking about a house full of bugs is scary enough for most people. But they’ve also added a retro house of the future vibe to it, which adds some fun to the scares,” Roseboom said.

“It is the most detailed and well done house this year. It really makes you feel as though you’re in a seaside town. The ‘buildings’ of the town are also layered so they have depth. The lore behind the House is also sort of a love story, and a violinist plays throughout, giving it a surreal feel,” he said.

nextSurprise is key part of migrant travel from Florida, Texas