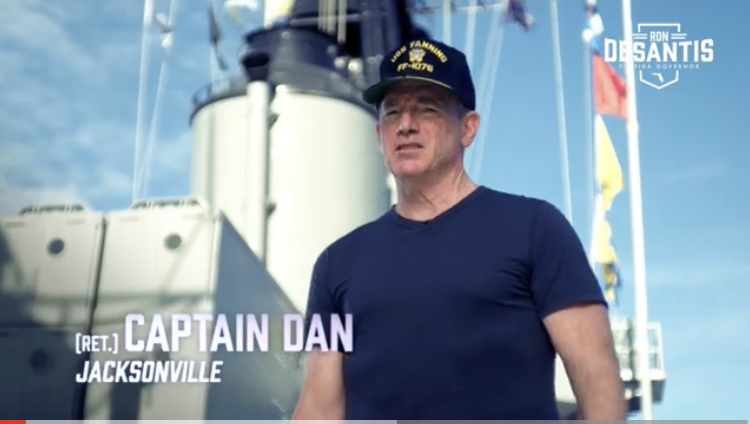 The re-election campaign of Gov. Ron DeSantis is rolling out a new ad reminding voters of his military roots.

The new “Honor, Courage, Commitment” ad, aired by the Republican Party of Florida, runs statewide and features the Governor’s former commanding officer in the U.S. Navy, Daniel Bean of Jacksonville.

“Gov. DeSantis is a true servant leader,” Bean proclaimed at the end of the spot, alluding to over a decade of history to back up his claim.

Bean met DeSantis when he was on active duty in 2009 as a Navy Commissioned Officer, and has nothing but praise for the Governor who appointed him to the JAXPORT board.

“When you’re advising Seal Team 1, you’re making life and death decisions every day,” Bean said, on what appears to be a Navy ship with flags flying behind him.

“And as someone who has served side by side with him, he is selfless and he will do what is in your best interest, not in his best interest,” Bean affirmed.

DeSantis “embodied the core values” of “honor, courage, and commitment,” Bean added, both on active duty and “every day as the Governor of our state.”

Of local interest: Bean was key to the effort that brought the USS Orleck to Jacksonville.

The sober-minded meditation on DeSantis’ military service is the latest callback to the Governor’s Navy days, coming after a summer in which DeSantis’ campaign apparatus found multiple ways to cash in on the summer blockbuster “Top Gun: Maverick.” These culminated in an ad where he was locked in mortal combat with the corporate media.

DeSantis offered some interesting quotes about today’s Navy in the press tour promoting that ad.

“I take my son to watch “Top Gun: Maverick,” right? And you’re proud of seeing the pilots and all that. Then in real life, what’s the Navy doing? They’re focusing on pronouns and all these other things, this woke garbage, while China’s laughing at us,” DeSantis lamented on the Aug. 13 episode of the The Glenn Beck Program.

See the new DeSantis ad below: