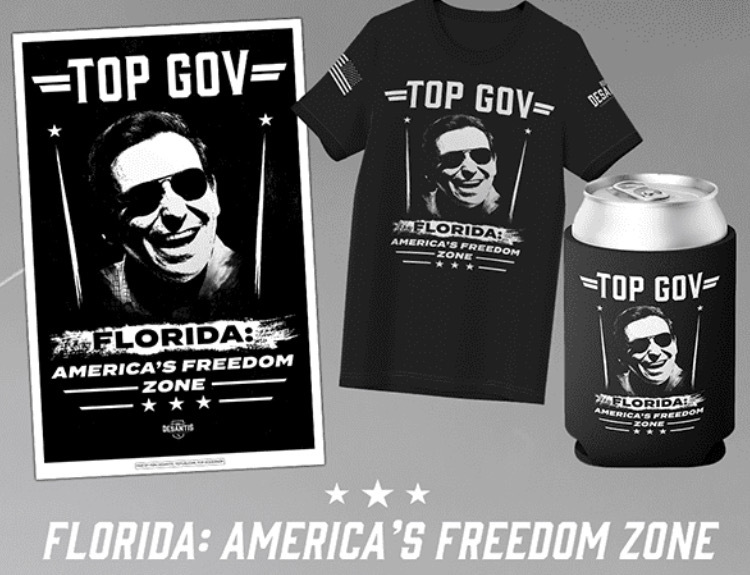 That’s the message from a rip-roaring new line of merchandise from the Florida Governor, who is paying homage to the box office smash “Top Gun: Maverick,” which already has over $600 million in global box office receipts.

The black-and-white tees ($30), posters ($25), and koozies (two for $15) from the Governor’s re-election campaign are the latest in a series of creative marketing offerings from his team.

“Our Freedom First Agenda is at full throttle. Governor Ron DeSantis is on a mission to defend Florida from the Brandon administration’s unending failures,” the copy reads. “In Florida, we have a Top Gov — and we plan to keep it that way.”

“Join us in Freedomtown, USA … Go Mach 10 for FREEDOM,” the pitch continued for the high-flying branded gear.

DeSantis expressed enthusiasm for the summer smash sequel to the 1986 original “Top Gun” during a press conference this week, while admitting he had not seen the film himself.

“Now everyone’s going so crazy over the latest iteration of ‘Top Gun,’” DeSantis said. “I have not seen it. I’ve heard really good things about it. Has anybody seen it?”

Members of the crowd cheered in delight.

“I do want to see it at some point. I think it’s just, you know, it’s like any movie that’s not, like, overwhelmingly woke can actually appeal to normal people,” DeSantis added.

The Governor’s animus to all things woke is well established, of course.

The left-of-center Vanity Fair sniffed that the movie was the right’s “latest culture war crusade,” a “patriotic anti-woke display of militarism and masculinity.” Unlike some quoted in that piece, though, DeSantis has actually served in uniform before entering politics.

DeSantis was a commissioned U.S. Navy JAG Officer, deployed in the global war on terror as an advisor to a U.S. Navy SEAL Commander in support of the SEAL mission in Iraq, where he earned a Bronze Star.

previousJoe Henderson: Florida's red flag law may be the best we can hope for

nextRon DeSantis posts another $10M month in May