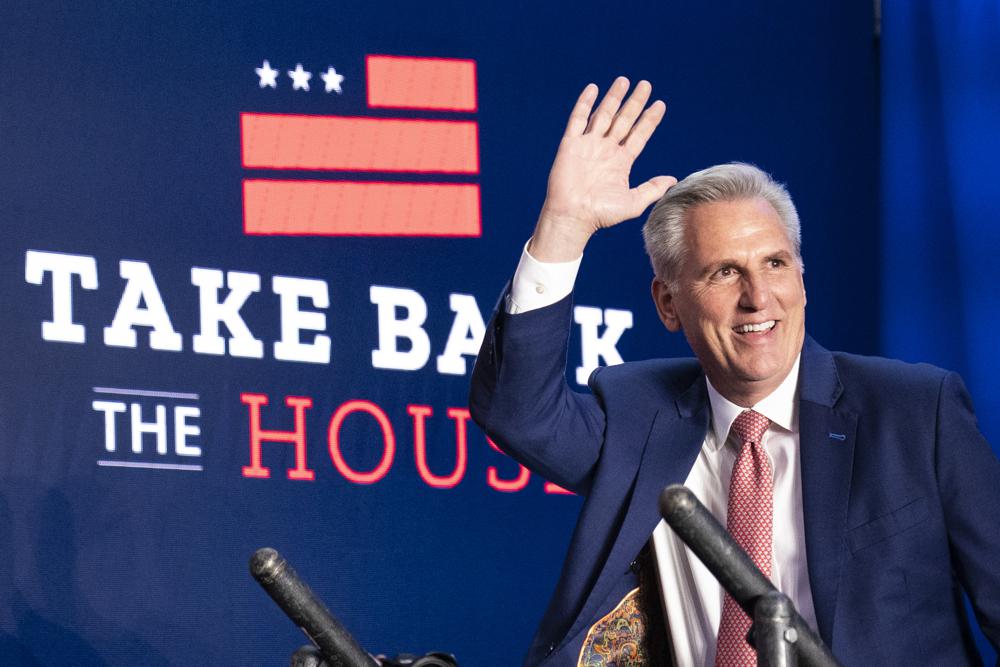 The Republican leader is facing a challenge from his right flank.

Republican leader Kevin McCarthy cleared the first major step Tuesday toward becoming House speaker, winning the nomination on a vote by his GOP colleagues, but he now faces a weeks-long slog to quell objections from his right flank before a final vote.

McCarthy has led House Republicans this far, and with them now on the cusp of majority control, he has a chance to seize the gavel from Nancy Pelosi if Democrats are defeated. The vote was 188-31, with ballots cast by newly elected and returning GOP lawmakers, and some whose races have not yet been called.

The formal vote for House speaker will come when the new Congress convenes in January, and McCarthy will need to shore up support from no fewer than 218 lawmakers with potentially just a few votes to spare.

“We’re going to have the ability to change America,” McCarthy said, upbeat as he entered the private meeting.

“The promised red wave turned into a loss of the United States Senate, a razor-thin majority in the House of Representatives, and upset losses of premiere political candidates,” Biggs said in a statement. “McCarthy does not have the votes needed to become the next Speaker of the House and his speakership should not be a foregone conclusion.”

Many in the Republican Party are blaming their losses on Donald Trump, the former president who endorsed hundreds of candidates, many of them far-right contenders rejected by voters. The closed-door leadership elections are playing out on Capitol Hill hours before Trump is expected to announce his 2024 bid for the White House from his Mar-a-Lago club in Florida later Tuesday evening.

It’s not just McCarthy’s leadership that is in question but his entire team. This includes Rep. Tom Emmer, R-Minn., the campaign chairman who traditionally would be rewarded with a leadership spot but finds himself in a three-way race for GOP whip that might be forced into a runoff.

And one of Trump’s top allies in the House, Rep. Elise Stefanik of New York — the third-ranking House Republican and the first lawmaker to back Trump in a 2024 run — is working to fend off rival Rep. Byron Donalds, a Black Republican from Florida seen by many lawmakers as a potential new party leader.

A self-described “Trump-supporting, liberty-loving, pro-life, pro-Second Amendment Black man,” Donalds said after a closed-door forum late Monday he has enough support for the race with Stefanik to be close.

Tuesday’s vote will provide a snapshot of the grind ahead for McCarthy, as the 57-year-old Californian reaches for the gavel when the new Congress convenes in January.

Trump backs McCarthy for speaker, but the two have had a rocky relationship, and even Trump’s support is no guarantee McCarthy will reach the needed 218 votes, particularly if Republicans win the House with just a slim, few-seat majority that would leave him no cushion for detractors.

At least one Trump ally, Rep. Matt Gaetz of Florida, said he’s voting no on McCarthy.

It’s a familiar dynamic for House Republicans, one that befell their most recent Republican speakers — John Boehner and Paul Ryan — who both retired early rather than try to lead a party splintered by its far-right flank.

McCarthy survived those earlier battles between party factions, but he was forced to back out of a bid for the speaker’s job in 2015 when it was clear he did not have support from conservatives.

The weeks ahead promise to be a grueling period of hardball negotiations with the Freedom Caucus and rank-and-file Republicans as McCarthy tries to appease them and rack up the support he will need in the new year.

In a sign of how desperate Republicans are to bolster their ranks, some made overtures to conservative Democratic Rep. Henry Cuellar of Texas to switch parties and join the GOP.

The conservative Freedom Caucus lawmakers, who typically align with Trump, are prepared to extract demanding concessions from McCarthy before giving him their backing. They have a long list of asks — from prime positions on House committees to guarantees they can have a role in shaping legislation.

“I’m willing to support anybody that’s willing to change dramatically how things are done here,” Rep. Scott Perry, R-Pa., the chairman of the Freedom Caucus and a Trump ally, said after meeting privately with McCarthy.

But even rank-and-file lawmakers are assessing their choices for speaker, a position that is second in line to the president.

“We are voting for somebody who is going to be two heartbeats from the presidency,” he said.

While newly elected lawmakers arrived for orientation Monday, there are questions over who, exactly, will be voting Tuesday — with some of the House races still undecided. All the leaders will need to clear a simple majority Tuesday.

previousProtected or public? Court asks SCOFLA to again weigh in on privacy of adverse incident reports