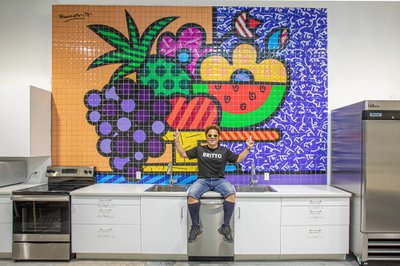 The first and only person to hold the largely symbolic role was musician and producer Emilio Estefan.

World-renowned artist Romero Britto could soon become a “Special Ambassador” representing Miami-Dade’s trade and cultural interests at events in and outside the county.

If approved, Britto would become just the second person to hold the unpaid position, which has remained vacant for more than five years.

The Miami-Dade Board of County Commissioners is scheduled to host a public hearing Dec. 14 on the matter. Should its members proceed with a vote afterward, at least two-thirds of the Board must OK Britto for the role.

The Board created the “Special Ambassador” program back in 2013, “for the purpose of promoting increased interchanges of ideas, goodwill, cooperation, and understanding on behalf of the citizens of Miami-Dade County,” according to the authorizing ordinance.

Appropriate candidates for the “Special Ambassador” role “should have national or international stature and shall provide symbolic representation on behalf of the county,” the ordinance said.

At the time, the position was called the “Trade and Cultural Ambassador.” The first and only person to hold it was musician and producer Emilio Estefan.

His wife, seven-time Grammy Award winner Gloria Estefan, was named as co-ambassador in an earlier version of the legislation. The substitute ordinance, onto which all 13 Commissioners at the time signed as co-sponsors, named only Emilio Estefan.

Britto would be more than an apt successor. The 59-year-old, Brazil-born artist whose pop art and cubist paintings, sculpture and serigraphs earned him global fame and success has held numerous other ambassadorships in recent years.

In 2010 and 2014, he was one of FIFA’s World Cup ambassadors. He won the same honors in 2016 when the Olympics came to Rio de Janeiro. He’s served as a “Goodwill Ambassador” for the youth empowerment organizations Mentor International and Mentor Foundation USA, and he’s among those honored with a star on Miami’s Walk of Fame — which he designed.

His artwork has appeared at world-famous museums including the Carrousel du Louvre in Paris and Today Art Museum in Beijing. It’s also permanently installed at numerous sites throughout Miami-Dade, has been commissioned for the Super Bowl, among other major events, and been used in the campaigns of a plethora of global brands, including Absolut, Audi, Bentley, Coca-Cola, Walt Disney, Evian, Hublot and Mattel, to name a few.

Miami-Dade Commissioners gave a preliminary OK to naming Britto as the county’s next “Special Ambassador” on Nov. 15, when they voted 10-0 for an ordinance by Jose “Pepe” Diaz, Oliver Gilbert III, Sally Heyman and Rebeca Sosa.

Of those Commissioners, only Gilbert, who is now serving as Chair, remains on the Board. The others left office after the meeting due to term limits.

Florida Politics reached out to Britto and Gilbert for comment but received none by press time.

“Britto is an activist for charitable organizations worldwide and has donated his time, art, and resources to countless charities,” the ordinance said. “This Board would like to honor Britto for his significant accomplishments and contributions to the Miami-Dade community.”

The duties of a Miami-Dade “Special Ambassador” include attending and observing “various meetings, events, gatherings, functions and social occasions,” sharing “points of interest” and information about the county and other services “upon the request of a member of the Board of County Commissioners.”

The Ambassador must perform those services and cover the cost of transportation to perform them “at no cost to the county.”

The job also comes with little power. A “Special Ambassador” has no advisory or decision-making authority and no voting privileges.

previousAndrew Warren makes case against suspension in Day One of trial against Gov. DeSantis