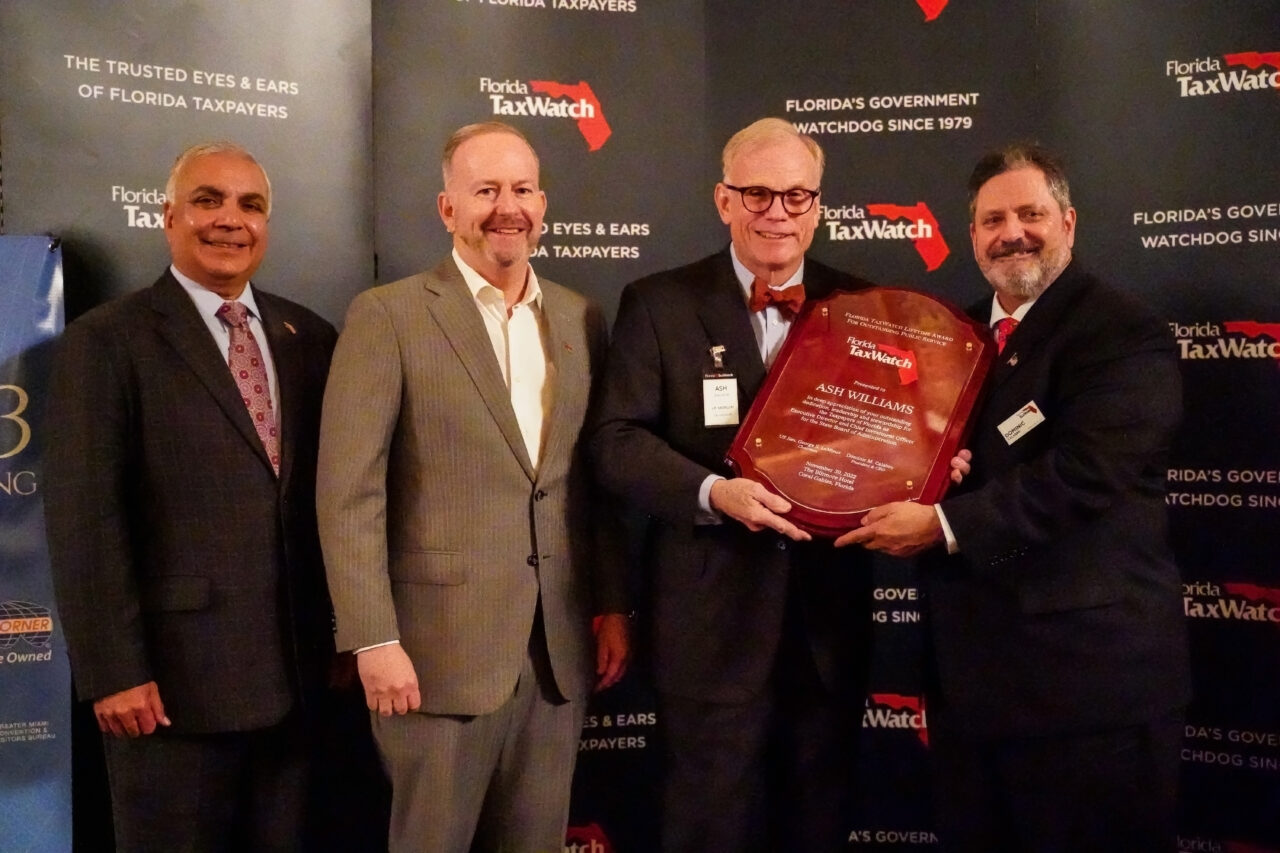 Public pensions have come under political fire throughout the country. But a former director who handled Florida’s assets said the Sunshine State need not worry about the fiscal health of its program.

Ash Williams, former Executive Director and CIO of the State Board of Administration (SBA), said Florida’s structure leaves its own funds more nimble and less influenced by politics.

“We have governance second to none in this country,” Williams said. Florida’s system, where one person makes direct decisions about investments, allows for an SBA director to act more quickly than in states where decisions must go through a board of political appointees.

During two stints heading the agency, Williams oversaw massive growth in the fund. For some 18 years of total service, Florida TaxWatch on Wednesday evening gave Williams a lifetime achievement award for his public service at a ceremony at The Biltmore in Coral Gables.

TaxWatch founder Dominic Calabro said the honor is one Williams earned by keeping the state’s system healthy and resilient.

Williams in his speech noted 66% of the state’s pension fund at this point is funded by investment revenues. That’s a part of why he brushes off many political criticisms that assert pensions drain taxpayer revenue unfairly.

Of course, he said Florida does have some advantages over funds in other states. The most troubled funds commit significantly into health care benefits, a ballooning commitment that Florida does not make to public employees.

The result of a healthy fund, Williams said, is ultimately rewarding many public employees who commit their life to public service, often at salaries that are less than they might earn in the private sector.

“It rewards them with a savings vehicle that allows them to live in retirement with dignity beyond their working years,” he said.

Williams spoke at the TaxWatch event about the current economy and what to expect from investments in the coming years, especially as markets suffer and inflation rises. He predicted the Fed will continue to keep high interest rates in 2023, perhaps intentionally defying expectations.

“There’s been a narrative around the idea they will tighten until mid-2023 and then reverse course and drop rates again. It will be great. Markets will go up. That’s the rumor,” Williams said.

“And the Fed sits back and says inflation is all about expectations. If the market is telling us to do this pricing, and then the expectation is we are going to do a pivot in mid-’23 and loosen them. We have to convince them we’re serious. We scare the child, tell him he is going to get a beating and keep showing him the paddle. Hopefully he’ll shape up. That’s right where we are.”