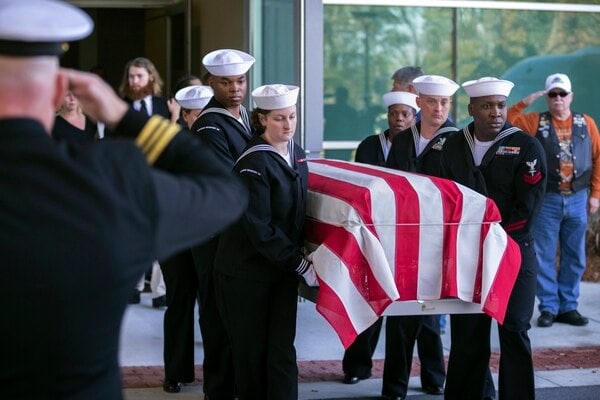 Tuesday marks three years since a terrorist shot three U.S. Navy sailors dead and injured eight others. In a memo to the Department of Management Services, the Republican Governor is asking flags to be flown at half-staff at all local and state sites across Florida from sunrise to sunset.

“Florida owes a debt of gratitude to our military men and women who selflessly put their lives on the line to protect and defend the values our nation holds dear,” DeSantis wrote in a proclamation declaring Naval Air Station Pensacola Remembrance Day.

Florida stands united in times of tragedy and continues to pray for those impacted by the attack, he added in the proclamation, published Monday.

“Florida’s law enforcement, first responders, and active duty military personnel, including some of whom were wounded that day, showed tremendous courage in the face of evil by saving lives and helping others,” DeSantis wrote.

On Dec. 6 2019, a Saudi Arabian aviation student at Naval Air Station Pensacola shot and killed three U.S. sailors in what the Department of Justice later deemed a terrorist attack. Eight others were injured, including two Sheriff’s deputies who were first responders on the scene.

Killed in the shooting were Joshua Kaleb Watson, a 23-year-old graduate of the U.S. Naval Academy; Airman Mohammed Sameh Haitham, 19, of St. Petersburg, Florida, who joined the Navy after graduating from high school; and Airman Apprentice Cameron Scott Walters, 21, of Richmond Hill, Georgia.

“The terrorist attack at NAS Pensacola is a day I’ll never forget,” Andrade said in a statement to Florida Politics. “I’m grateful to Governor DeSantis for always being there when we called, and for honoring and remembering the sacrifices so many of my constituents in law enforcement and the Navy made that day and the days afterward.”

previousLast Call for 12.5.22 — A prime-time read of what’s going down in Florida politics