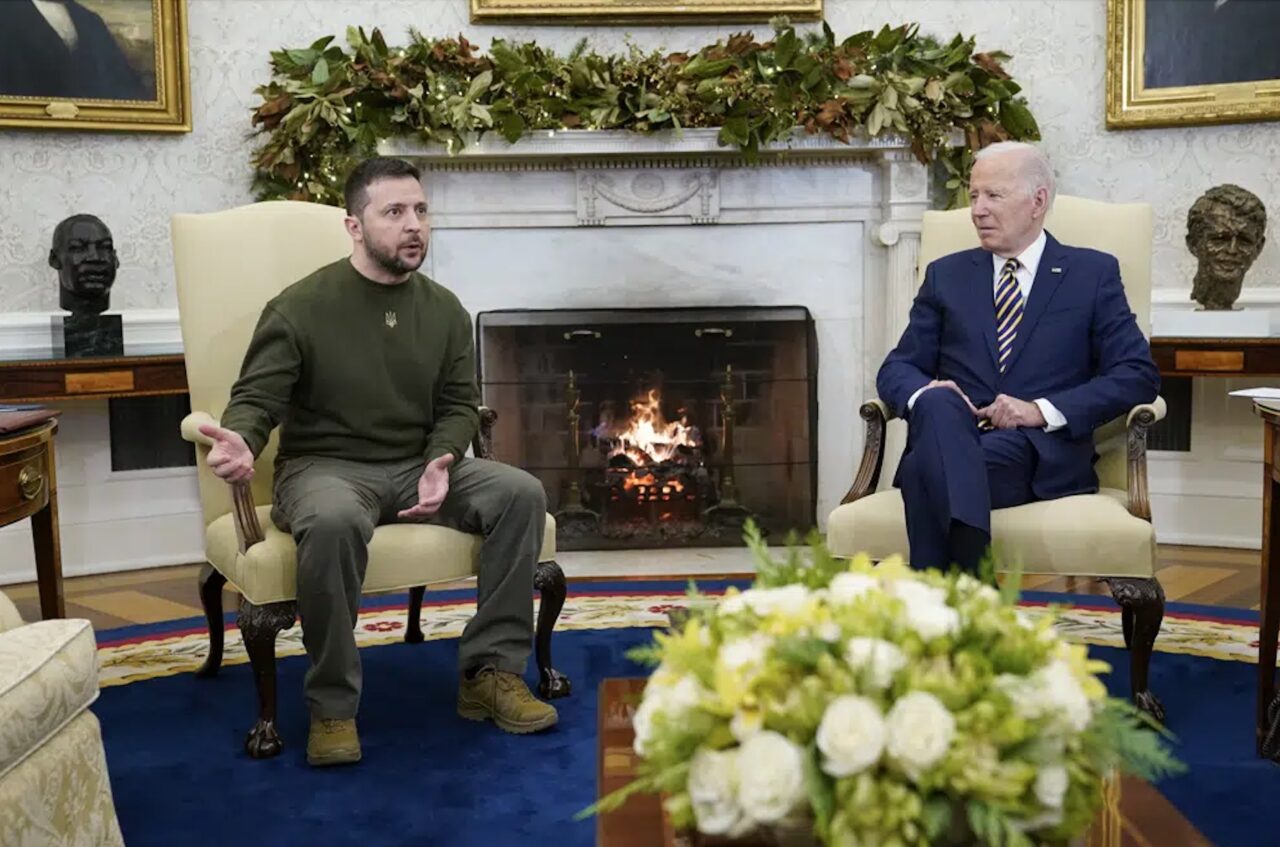 Ukrainian President Volodymyr Zelenskyy thanked President Joe Biden, U.S. lawmakers and “ordinary people” of America for their support as he visited the White House on Wednesday. Biden told Zelenskyy that Ukrainians “inspire the world,” before the two leaders began an Oval Office summit that was Zelenskyy’s first known trip outside his home country since Russia invaded in February.

In a brief remarks before reporters, Biden told Zelenskyy that “it’s an honor to be by your side” and he pledged continued financial, military and humanitarian aid for Ukraine. Biden also warned that Russia is “trying to use winter as a weapon” in the war.

Zelenskyy said he wanted to visit the United States at an earlier time, but could not. He stressed that the “war is not over” and that his country faces many challenges in battling Russia.

THIS IS A BREAKING NEWS UPDATE. AP’s earlier story follows below.

WASHINGTON (AP) — President Joe Biden welcomed Ukrainian President Volodymyr Zelenskyy to the White House on Wednesday as the leaders try to show a unified front against Russia’s invasion of Ukraine. Their summit was Zelenskyy’s first known trip outside his home country since the war began in February.

Biden and first lady Jill Biden greeted Zelenskyy, who wore casual army green attire, as he got out of his vehicle. He shook hands with Biden before they went inside for their Oval Office meeting, followed by a news conference. In the evening, Zelenskyy will address Congress.

“I am in Washington today to thank the American people, the President and the Congress for their much-needed support,” Zelenskyy posted on his official Instagram account after he landed. “And also to continue cooperation to bring our victory closer.” He said the visit would “strengthen resilience and defense capabilities” of Ukraine.

The highly sensitive trip was taking place after 10 months of a brutal war that has seen tens of thousands of casualties on both sides and devastation for Ukrainian civilians. Just before his arrival, the U.S. announced its largest single delivery of arms to Ukraine, including Patriot surface-to-air missiles, and Congress planned to vote on a spending package that includes about $45 billion in emergency assistance to Ukraine.

Zelenskyy headed abroad after making a daring and dangerous trip Tuesday to what he called the hottest spot on the 1,300-kilometer (800-mile) front line of the war, the city of Bakhmut in Ukraine’s contested Donetsk province. He praised Ukrainian troops for their “courage, resilience and strength” as artillery boomed in the background.

Poland’s private broadcaster, TVN24, said Zelenskyy crossed into Poland early Wednesday on his way to Washington. The station showed footage of what appeared to be Zelenskyy arriving at a train station and being escorted to a motorcade. TVN24 said the video, partially blurred for security reasons, was shot in Przemysl, a Polish border town that has been the arrival point for many refugees fleeing the war.

U.S. officials, citing security concerns, were mum about Zelenskyy’s travel plans, but a U.S. official confirmed that Zelenskyy was transported on a U.S. Air Force jet that landed at Joint Base Andrews, just outside the capital.

White House press secretary Karine Jean-Pierre said in a statement that the visit “will underscore the United States’ steadfast commitment to supporting Ukraine for as long as it takes, including through the provision of economic, humanitarian, and military assistance.”

Zelenskyy was to meet with Biden at the White House in the afternoon and then join Biden for a news conference in the East Room. The address to Congress, which Vice President Kamala Harris will attend, was expected in the evening

House Speaker Nancy Pelosi, in her invitation to Zelenskyy to speak to lawmakers, said “the fight for Ukraine is the fight for democracy itself” and that they were looking forward to “hearing your inspiring message of unity, resilience and determination.”

U.S. and Ukrainian officials have made clear they do not envision an imminent resolution to the war and are preparing for fighting to continue for some time. The latest infusion of U.S. money would be the biggest yet — and exceed Biden’s $37 billion request.

Biden has repeated that while the U.S. will arm and train Ukraine, American forces will not be directly engaged in the war.

Biden and Zelenskyy first discussed the idea of a visit during a telephone call on Dec. 11, with a formal invitation following three days later, according to a senior U.S. administration official. Zelenskyy accepted the invitation on Friday and it was confirmed on Sunday, when the White House began coordinating with Pelosi, D-Calif., to arrange the congressional address.

The White House consulted with Zelenskyy on security, including the risk of Russian action while Zelenskyy was briefly out of the country, said the official, who declined to detail the measures taken to safeguard the Ukrainian leader. The official briefed reporters on the condition of anonymity because of the sensitive nature of the visit.

The $1.85 billion U.S. military aid package will include, for the first time, a Patriot missile battery and precision guided bombs for its fighter jets, U.S. officials said. It represents an expansion in the kinds of advanced weaponry intended to bolster Ukraine’s air defenses against what has been an increasing barrage of Russian missiles.

Russia’s Foreign Ministry has said the delivery of the advanced surface-to-air missile system would be considered a provocative step and that the system and any crews accompanying it would be a legitimate target for Moscow’s military.

It was unclear when the Patriot battery would arrive on the front lines in Ukraine, given that U.S. troops will have to train Ukrainian forces. The training could take several weeks and is expected to be done in Germany.

The visit comes at an important moment, with the White House bracing for greater resistance when Republicans take control of the House in January and give more scrutiny to aid for Ukraine. GOP leader Kevin McCarthy of California has said his party will not write a “blank check” for Ukraine.

Biden and Zelenskyy frequently have talked by phone, with Biden praising Ukraine for remaining steadfast against the Russians and Zelenskyy thanking the U.S. president for support.

The one exception to those warm calls came in June, soon after Biden notified Zelenskyy that an additional $1 billion package was headed to Ukraine. Zelenskyy didn’t miss a beat in ticking off the additional assistance he said Ukraine needed.

That irked Biden, who underscored to Zelenskyy the American people’s generosity. But the brief moment of tension hasn’t caused any lasting difficulty, according to officials familiar with the episode who spoke on condition of anonymity to discuss the private conversations.

Senate Majority Leader Chuck Schumer opened the chamber’s session by saying that passage of the aid package and confirmation of the new U.S. ambassador to Russia, Lynne M. Tracy, would send a strong signal that Americans stand “unequivocally” with Ukraine. Tracy was confirmed later on a 93-2 vote.

Schumer, D-N.Y., said Zelenskyy arrives not only as a president but an “ambassador to freedom itself.”

With the fighting in the east at a stalemate, Moscow has used missiles and drones to attack Ukraine’s power equipment, hoping to leave people without electricity as freezing weather sets in.

In a video released by his office from the Bakhmut visit, Zelenskyy was handed a Ukrainian flag and alluded to delivering it to U.S. leaders.

“The guys handed over our beautiful Ukrainian flag with their signatures for us to pass on,” Zelenskyy said in the video. “We are not in an easy situation. The enemy is increasing its army. Our people are braver and need more powerful weapons. We will pass it on from the boys to the Congress, to the president of the United States. We are grateful for their support, but it is not enough. It is a hint — it is not enough.”

Volodymyr Fesenko, head of the Kyiv-based Penta Center think tank, said Zelensky’s visit to the U.S. “should determine the course of the war — Zelensky for the first time dared to leave Ukraine and is counting on being able to maintain, and possibly even strengthen, U.S. military and economic assistance.”

Hanna Danylovych, 43, who lives in Kyiv, Ukraine’s capital, and works as a scientist, welcomed the prospect of additional military supplies, saying “there is a great desire and dream to speed up the removal of Russian evil from our land.”

Russian President Vladimir Putin on Wednesday told his country’s military leaders that Russia will achieve its stated goals in Ukraine and use the combat experience to strengthen its military. His defense minister, Sergei Shoigu, said Russia’s military must be expanded from the current 1 million to 1.5 million amid the fighting in Ukraine.