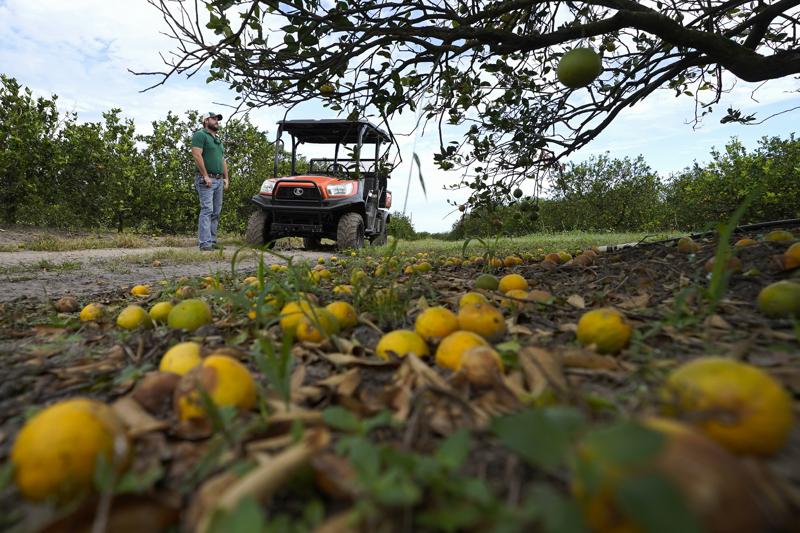 Preliminary assessments put farmland damage from Hurricane Ian as high as $1.56B.

More than a million acres of agricultural land in Florida suffered damage from Hurricane Ian. Citrus greening continues to wallop yields on juice. More growers are simply calling it quits.

But agriculture leaders say demand for Florida orange juice remains high and the industry remains one of the largest in the state.

“We still have a lot of growers throughout Florida that are engaging in this industry,” said Matt Joyner, executive vice president and CEO of the Florida Citrus Mutual.

He spoke at a meeting of the Senate Agriculture Committee ahead of this year’s Legislative Session. Based on feedback from more than 2,500 growers in the industry, he said now remains one of the most challenging periods ever for Florida agriculture.

Officials from the Department of Agriculture backed that up, recounting the damage done by Hurricane Ian, a Category 4 storm when it hit Southwest Florida in September and then tore through the Florida Heartland.

Dr. Christa Court, director of the Economic Impact Analysis Program at the University of Florida Institute of Food and Agricultural Sciences (IFAS), shared a damage assessment from the storm, noting 700,000 acres of agricultural crops endured Category 4 storm winds and another 500,000 when through less severe hurricane-strength winds. That number doesn’t include damage to grazing lands

“The remainder of the peninsula again was affected by tropical storm conditions and those commodity groups that were most affected here in terms of acreage were citrus and vegetables and melons,” she said.

Preliminary estimates from IFAS put the monetary damage from the storm on the industry as a whole somewhere between $787 million and $1.56 billion.

This has created a daunting future for growers, like Glenn Beck of Beck Brothers Citrus. He’s a fourth-generation grower, one who wants to pass his farmlands down to a fifth generation of Becks. But he said production and profit reductions have made it hard in recent years to balance the books.

“As a grower and a caretaker, we have many people that we take care of their acreage, and production had diminished to the point that they were at a break even,” he said. “Many of the growers (who are) left, they are hardcore. They are going to stay on in any way possible.”

While the most resilient — or stubborn — growers can go through a difficult year, they cannot last forever, he said.

Joyner said history tells Florida it takes three years to bounce back from a hurricane before crops produce at the same level as before a storm. But an added challenge now remains citrus greening, a disease infesting Florida crops and reducing yields.

In terms of good news, demand for Florida juice remains high. In fact, when surveyed, most consumers believe their orange juice comes from Florida anyway, and imports have increased because Florida can’t meet the demand. With the Fresh From Florida program branding true Florida juice and labeling requirements strictly forbidding juice from elsewhere claiming a Sunshine State origin, that all helps citrus producers here.

Joyner said it would still be beneficial for the state to extend land agreements, particularly in the Florida Greenbelt.

“If there was a way to expand that a little bit further as we look to recover from the storm, that could be an area that would enable these growers to hang on to what is otherwise very valuable real estate,” Joyner said.

Senators committed to seeking ways this year to bring some security to the industry.

“Agriculture is a part of what we do here in Florida. It has always been and always needs to be,” said Sen. Jay Collins, a Tampa Republican and chair of the Senate Agriculture Committee. “We need to stabilize that as we move forward.”