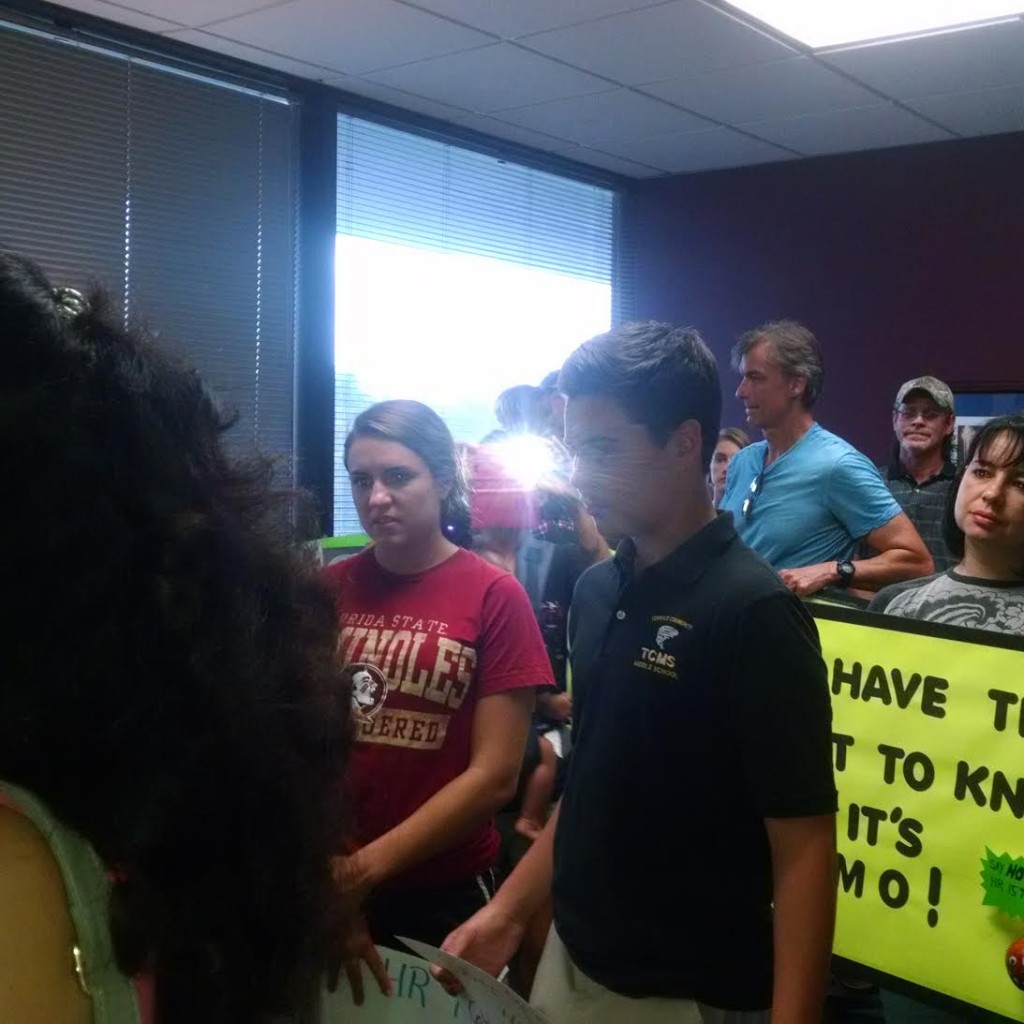 “We want those members of Congress, especially those on the committees, that we want labeling,” Dessa Stone-Pividal of March Against Monsanto told Castor aides. The congresswoman was not in the office.

“We don’t support Mike Pompeo’s bill that takes the states’ rights away and gives it to the federal government. to label. We’ve dubbed it the DARK Act, Deny Americans the Right to Know. I think we should have the right to know, with 64 other countries have either banned or required labeling by GMO’s, and the US is continuing to fight against the comsumer’s right to know, so we want her to know.”

The activists met with Castor aide Steven Angotti. He took petitions the activists had gathered gathered at an anti-GMO protest Saturday that urge Castor to oppose “The Safe and Accurate Food Labeling Act of 2015,” a House bill sponsored by Kansas Republican Pompeo. It would supersede a state’s  mandatory GMO labeling law, and would outline a voluntary non-GMO labeling option.

Whether you support or adamantly oppose GMOs (genetically modified organisms), most people want to know what’s in their food. A Consumer Reports National Research Center survey of 1,000 adults last year found that 92 percent of Americans want genetically modified foods to be labeled.

Groups representing major agriculture and biotechnology interests have poured millions of dollars into battles over state proposals to create mandatory labeling laws. In California in 2012, opponents  such as Monsanto and the Hershey Co. contributed $44 million to defeat the measure, which they did. Proponents spent $7.3 million.

Activists also say the Pompeo bill would narrow the circumstances for when the FDA can require disclosures down to health and safety concerns. The agency can now require a label merely to help consumers make more informed choices.

The groups instead are pushing Congress to pass the Genetically Engineered Food Right-to-Know Act, introduced in the Senate earlier this year by California Democratic Sen. Barbara Boxer, and in the House by Oregon Democrat Peter DeFazio. That bill would require labels for all foods produced using genetically engineering ingredients and prohibit manufacturers from labeling genetically modified foods as natural.

No states have such labeling laws in place, but Vermont is scheduled to become the first to do so in 2016. But  The Grocery Manufacturers Association — which is funded by a coalition of companies such as Coca-Cola, Unilever, Starbucks and Monsanto — and three other industry groups sued the state shortly after the law passed. The industry saw such laws are tantamount to fear mongering, since the the Food and Drug Administration considers food made with GMO essentially the same as non-GMO food.

Ken McCalvey, a Lutz man, said he wrote his congressman, Gus Bilirakis, about the Pompeo bill, and received a formal statement saying that the FDA and USDA are the federal agencies that review GMO products: “He doesn’t say he’s for it (the Pompeo bill) or against it or makes any statement like that.”

Connecticut and Maine have passed GMO laws, but there are clauses in them that preclude their taking effect until other states also pass legislation. Connecticut’s law require states with populations totaling more than 20 million to pass similar laws before its takes effect, and Maine’s law is in waiting until five other Northeastern states pass similar laws.

Tampa resident Stephen Smith attended the anti-GMO rally Saturday and said it was about keeping the truth out of the public’s hands.

“People want to know what’s in their food, if it’s modified, it it has additives, preservatives. It’s just common sense. Why would you want to take that away from people, the right to know these things?”

The University of Tampa communications and mass media major said he understands the issue about genetically modified foods isn’t covered sufficiently in the media because companies such as Monsanto do massive amounts of advertising with many major news outlets.

“I understand how business is conducted,” Smith said.

previousSenate alters health plan but fails to win over critics