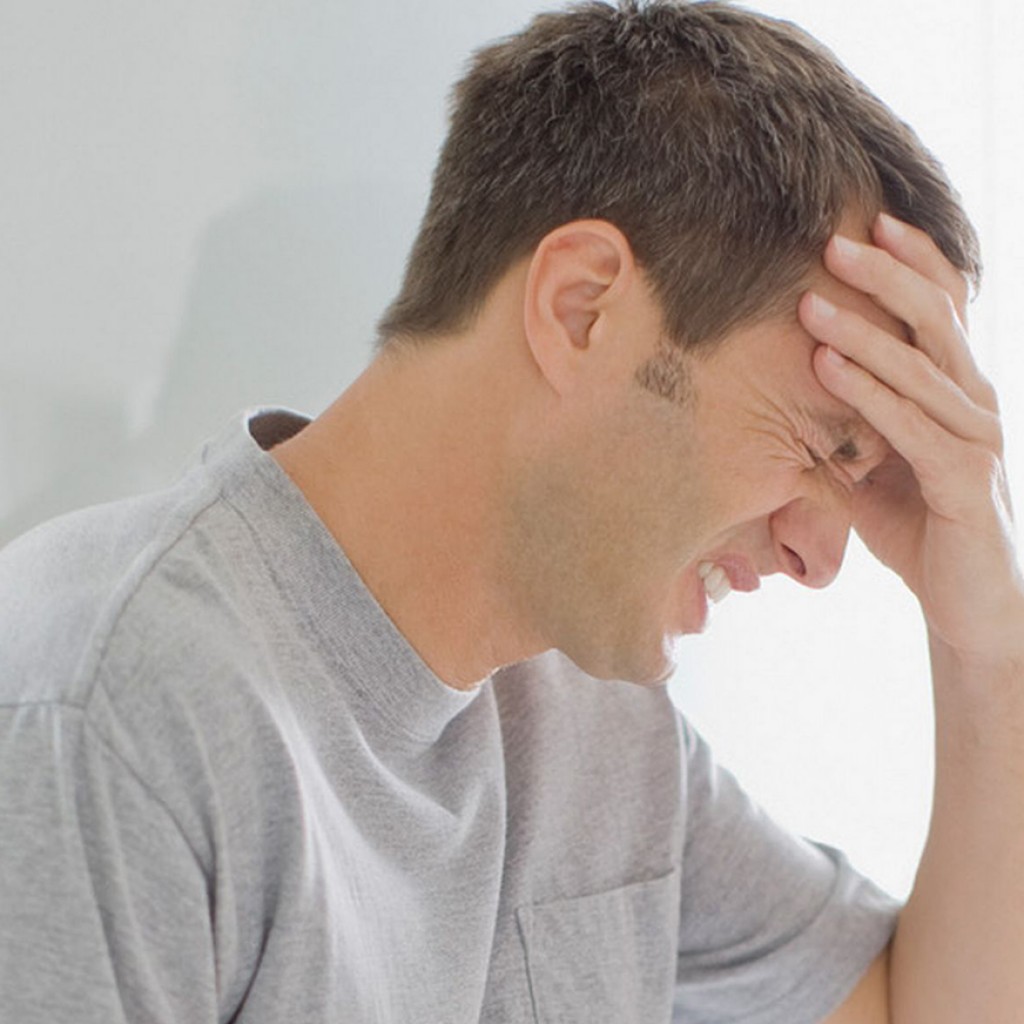 Amid an ongoing dust-up over Florida’s health care spending, there are troubling signs that one of the reforms touted by Gov. Rick Scott may not be saving taxpayers money as initially promised.

Scott signed into law in 2011 a measure that shifted Florida’s 3 million plus Medicaid patients into managed care. Scott praised the move and lobbied the federal government to grant approval for the shift.

But now with the overhaul complete Medicaid, HMOs have been pressing the Florida Legislature for rate increases citing losses.

That request, however, is drawing scrutiny from the Scott administration, which is questioning a request for a $400 million mid-year rate increase as well as a 12-percent increase in the upcoming year.

Agency for Health Care Administration Secretary Liz Dudek said in a letter to health plans that — if justified — the rate increases the managed care plans are looking for “raise the question of whether (statewide Medicaid managed care) is able to save money after all.”

The Florida Association of Health Plans sent a letter May 20 to Assistant Deputy Secretary for Medicaid Justin Senior. The health plans, she said, have reported a $295 million loss through December 2014. Citing reports with the Office of Insurance Regulation, the HMOs say the losses are  much higher–in the $500 million range.

While the losses generally are associated with pharmaceutical costs Dudek’s letter says illegal hospital contracts also could be driving losses. Florida law requires any hospital contract valued at more than 120 percent of Medicaid levels to be approved by the agency. Dudek says that many plans are reporting contracts that exceed the 120 percent value and some plans have reported to the agency that their average contracting relationship is over 120 percent. Yet, she said, no contracts have been sent to the state for approval.

As the plans’ cost proposals assumed much lower hospital reimbursement, it appears likely that hospital costs may be a significant driver of losses. As an industry, hospital profits rose to a total of $3.75 billion in 2014,” the letter reads.

Dudek says the state is committed to ensuring actuarially sound rates and that they can have significant input into the rates for the upcoming, second year of the statewide Medicaid managed care contract. She said draft rates will be available June 5.  But she warned the plans that adding money to the rates to cover start-up costs or rollout won’t be added to all the rates to cover losses is “erroneous” because those losses won’t continue in the out years of the contract.

Additionally, she said that “paying plans extra for hospital contracting levels that did not receive appropriate agency review and approval is also outside the bounds of what is reasonable capitation rate development and is ultimately not sustainable for the program. Florida taxpayers should not be required to bear the financial burden of inefficient contracting between the health plans and hospitals.” 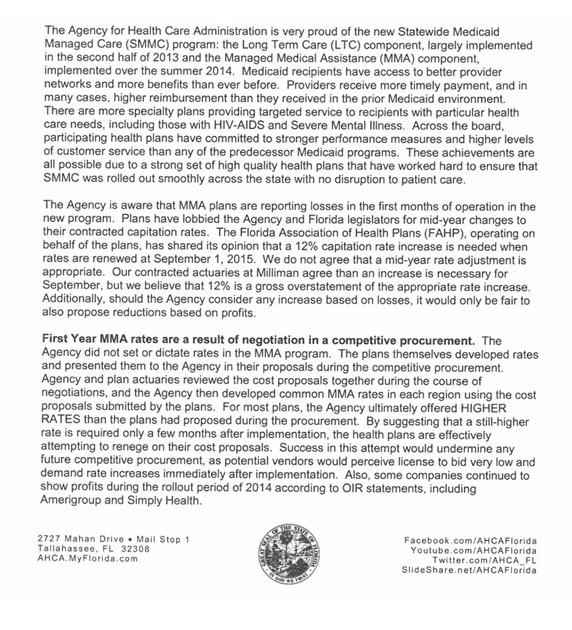 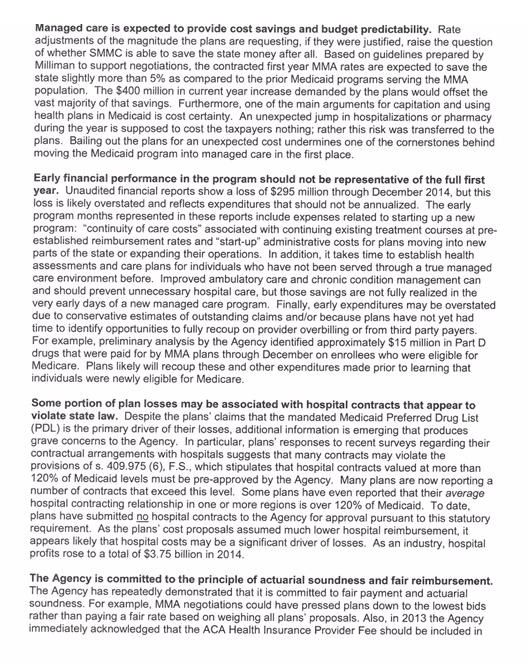 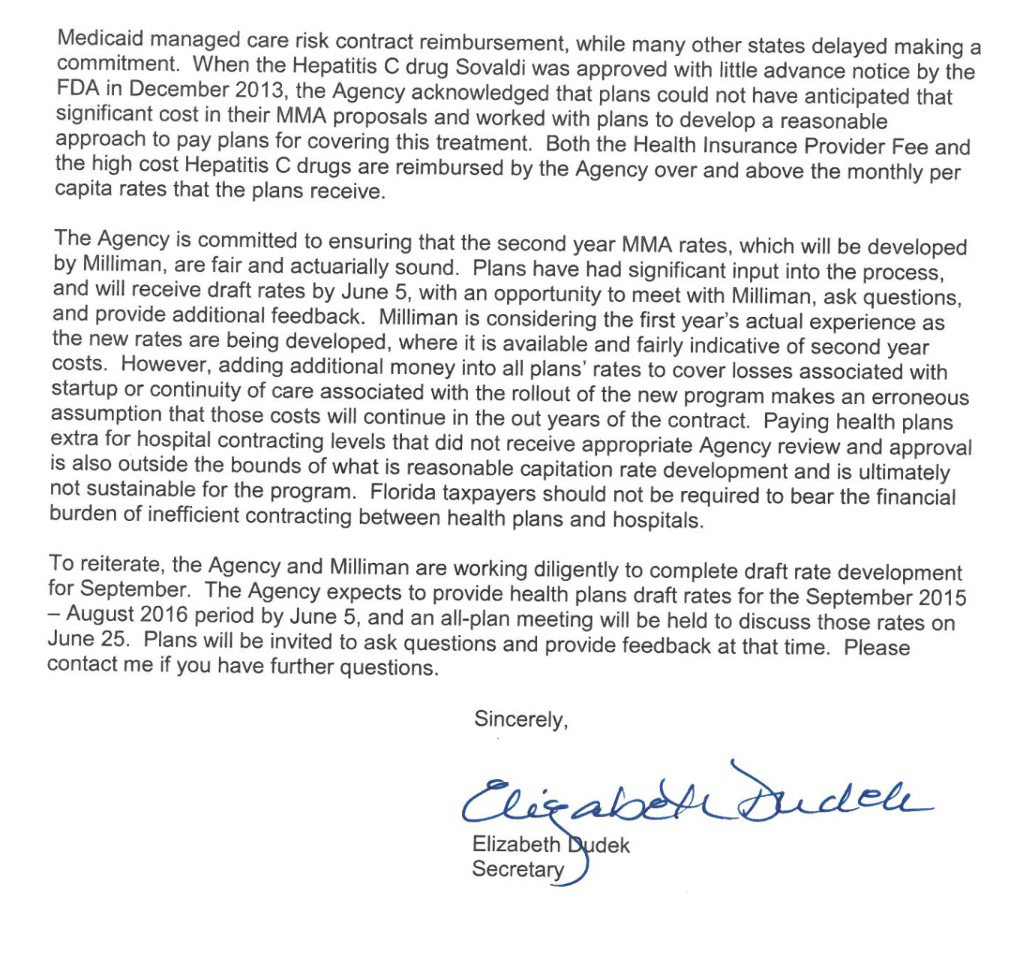 nextMarty Fiorentino on Lenny Curry money machine: "We stuck together"