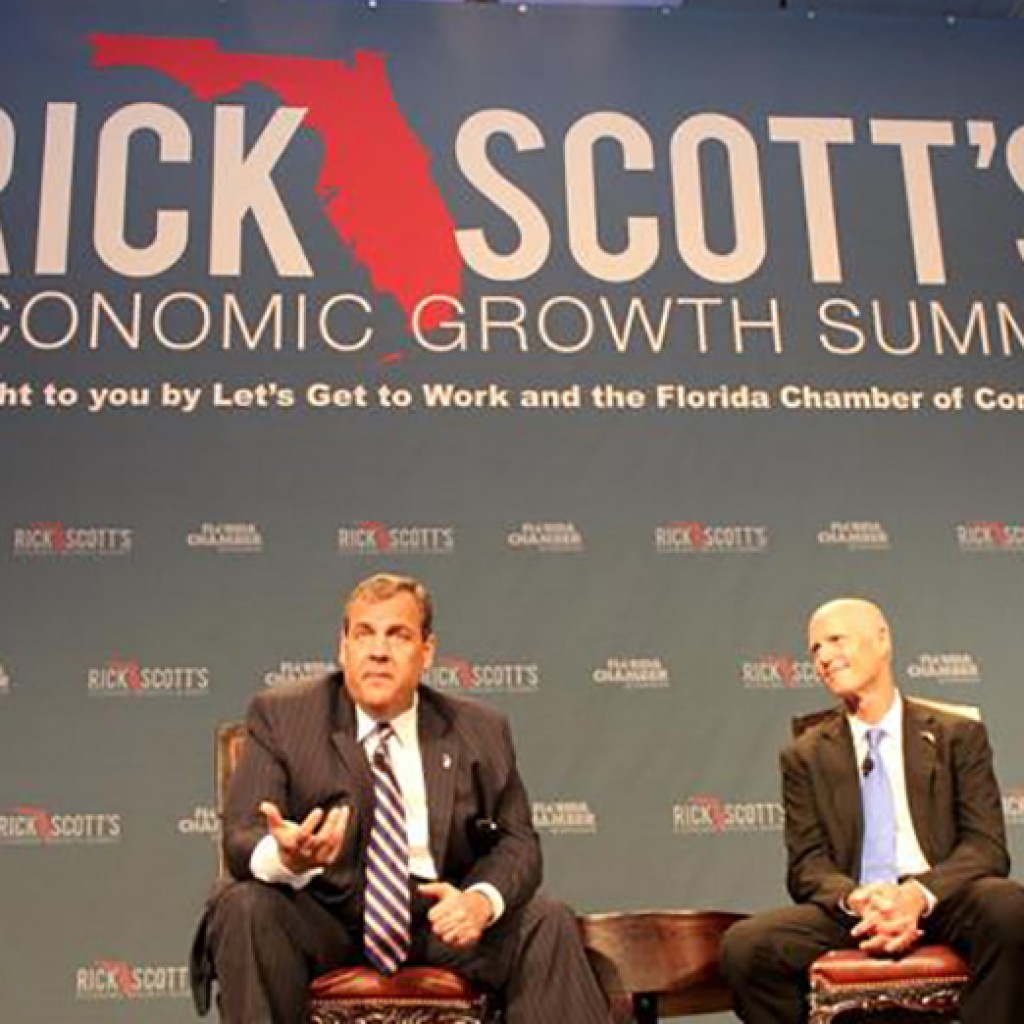 Leading Republican presidential prospects faced off at an event Tuesday at a GOP economic gathering hosted by Gov. Rick Scott that drew a half dozen White House hopefuls to a Disney World convention center.

1. Bush speaking before an audience composed mostly of members of the Florida Chamber of Commerce and/or Associated Industries is like Jimbo Fisher appearing before a Seminole Boosters luncheon. That Bush was the only contender to receive a standing ovation is not a surprise — in fact, it would have been a story had the crowd not risen to its feet. That said, Bush delivered the best, most even performance on Tuesday and was the only speaker who can employ the “presidential voice.” If events like these are warm-up acts to the GOP debates (which begin in only two short months) you can see how Bush will remain a frontrunner through the fall — by towering, almost literally, over most of his opponents.

2. Tuesday reinforced the idea that THE. BEST. THING. to happen to Bush is the slight correction his stock has taken during the past two months. The idea that he would “shock-and-awe” his opponents was as ridiculous a notion as when the term was first used to describe his brother’s military plans for Iraq. Instead of being the frontrunner every other candidate is targeting, Bush is just first among relative equals, giving as good as he’s getting while other presumed frontrunners, such as Walker and Rubio, take their share of flak.

3. Right now, Rubio is the flavor of the week for the GOP nomination. Both The Associated Press and POLITICO published stories Tuesday evening about how the race for Florida’s Republican delegates, once thought to be locked up by Bush, is in play. If that’s so, then Rubio needs to rapidly develop a second act. The plaintiff “American Exceptionalism” is also a crowd-pleaser but he needs a few more hits to make his campaign a concert. His video performance at the #EGS15 was basically the same speech he’s been giving since 2009.

4. It’s almost funny, but the rest of the speakers played to type. Huckabee was folksy, Perry was Texas-y, Walker was Midwestern-y, Christie was blustery, and Jindal was wonky.  In other words, there were very few surprises, which is a problem for …

5. … Walker (who only surprised with his walk-back on competing in Florida’s presidential primary) and actually a loss for the Wisconsin governor. There were definitely some folks at the event eager to hear what Walker had to say, just as there are some Florida Republicans not aligned with Bush or Rubio who would like to see a strong alternative emerge. But I did’t hear from anyone coming out of Disney’s Yacht Club Convention saying, “Whew, that Scott Walker has me convinced …”

6. If your opening joke is a reference to two-decades-old Rick Moranis movie, you’re doing it wrong, Mike Huckabee. The former Arkansas governor means well and poll well, but is there enough of the Cracker Barrel crowd for him to win the nomination? That said, the second half of Huckabee’s speech was chock full o’ policy.

7. Worst staff work of the #EGS15? Whoever’s bright idea it was to let Chris Christie plop down in a chair on the stage. Dude did not look good, nor did he sound good either. As several people, not just myself, noted, Christie sounded as if he ate a hot pastrami sandwich with spicy mustard before coming out. He was just, um, verklempt. Yeah, yeah, yeah, Christie talked tough about entitlement reforms, but it doesn’t really matter does it? The shine is off on this guy. He should save himself and not declare himself an official candidate.

8. You know who is pissed he wasn’t invited to Rick Scott’s Economic Growth Summit? Donald Trump, who let organizers know he was none too pleased he was not asked to speak. One of the event’s top staffers told me on Wednesday that, yes, they had heard Trump was upset, but Gov. Scott and Co. asked the participants months in advance about attending the event and at that time there was no way to know that Trump would be semi-serious about possibly running for president.

9. You know which presidential contender several people said should have been invited? Carly Fiorina.

10. At the end of the day, this event was a) almost as much about Rick Scott as it was the 2016 race and b) will quickly be forgotten, despite how well organized and efficient it was.  How much was it about Scott? One attendee and top GOP insider said to me it was “all about the possessive ‘s’ ” — a reference to the first time they had seen the words “Rick Scott’s” on a banner. This is a very subtle, but insightful point. Rick Scott, having twice won the most battleground-y state in the nation, is now his own brand.

10A. Scott absolutely was in his element Tuesday. This was the CEO of the State of Florida Inc. presiding over what looked and felt like a shareholders meeting. From his opening TED-esque Talk to the reunion of some of his key past campaign and administration staffers like Mary Anne Carter and Enu Mainigi, this was Scott’s day to shine.

Bonus takeaway: Something that struck me at #EGS15 that I will write more about in a separate post is how the event was also a coming out party for POLITICO and POLITICO Florida. Here we are 90 minutes from the headquarters of the Southeast’s largest newspaper, the Tampa Bay Times, and the D.C. guys just owned the place.

Watching Mike Allen, Marc Caputo, and the rest of the POLITICO imperialists talk about their expansion into Florida, it was like the scene from Animal House where the cool black dudes ask the frat guys, “Do you mind if we dance with your dates?” The traditional outlets seem to have no answer.