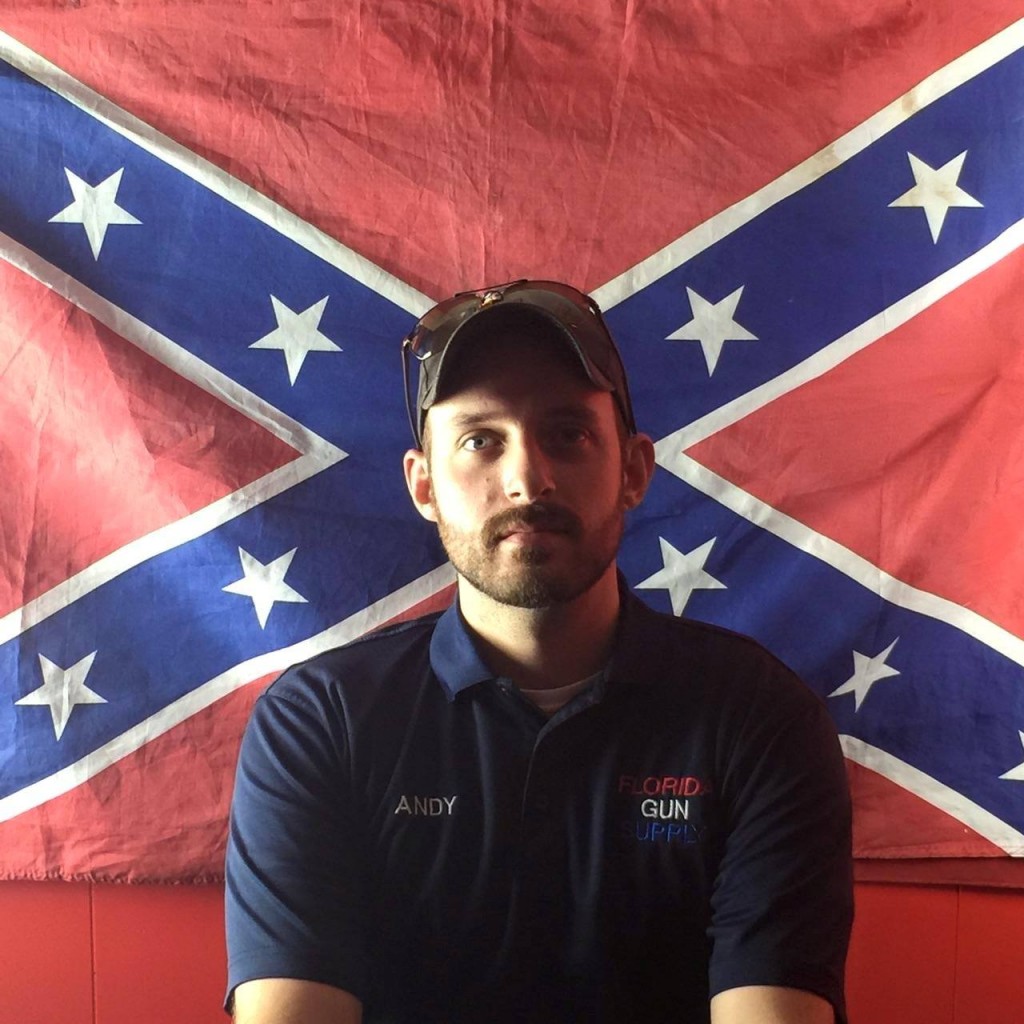 An Inverness gun store has received global publicity through a recent video that went viral. Posing in front of a Confederate flag, the owner held forth with very controversial thoughts on subjects ranging from President Barack Obama and political correctness to jihad and the recent mass shooting in Chattanooga by a Muslim extremist.

“The leaders of our country want you to believe this flag represents hatred and intolerance; that’s not true,” starts the most recent video from Inverness gun shop Florida Gun Supply, which explains that the owner flies the Confederate flag as a response to “tyranny.”

The video has almost 3,000 shares as of this writing.

“Racism was on the decline in America until Obama took office,” the video continues. “Now the leaders of our country are telling you that anytime a black man is shot by a white cop, it’s because of race. Don’t believe their lies.”

“Our leaders are telling you that Islam … is full of peace and love and hope,” the video continues.

“We’re in battle, patriots. But not only with Islamic extremism. We’re also in battle with extreme political correctness that threatens our lives. If we can’t call evil evil for fear of offending people, then we can’t defeat our enemies.”

The video turned to the Chattanooga mass murder of Marine recruiters, contesting the claim that it was an “isolated incident.”

In reaction, purportedly, to what happened in Chattanooga, store policy experienced a few changes. Concealed carry classes are now free, for one. The shooting range is also open to the public, for free. The idea here: Stay in practice “in case we are ever called upon to defend our lives or our community.”

“I have a moral and legal responsibility to shield the safety of all patriots in our community,” the video continues. Thus, “effective immediately, Florida Gun Supply is a Muslim Free Zone.”

Regarding the “jihadists” among us, the store policy is that “patriots” should be “armed and equipped” to do battle.

National leaders, meanwhile, are “trying to turn North versus South, and whites versus blacks” to foment division, according to the Inverness gun shop.

The video goes on to say that the “leaders of our country” are at war not just with the Confederate flag, but also with the United States flag.

National media has taken interest in this; the most thorough story was from WPTV. In that report, the owner of Florida Gun Supply, Mark Hallinan, said “I had to offend everyone to get my message across.”

He did moderate his position in talking to them … somewhat.

“I believe that the vast majority of Muslims are not out to kill us. But unfortunately, the Koran, the way it’s written, commands them to. But if they come in here and they say ‘Hey, I don’t believe in Jihad.’ And, ‘I don’t believe that killing innocent people in the name of religion is the right thing to do,’  they are as American as you or I,” he said.

Florida Politics called Florida Gun Supply to follow up on reporting. Regrettably, they are not answering their phone today. However, their outgoing message merits quotation in itself.

Whether that claim is strictly true is a matter of interpretation. There are quite a few supportive messages, but there are some in opposition, such as this one.

“Accusing a religion of 1.6 billion Muslims to be extreme, violent and hateful is very misleading. Extremism is politically driven and belongs to no religion. Just because a misguided few decide to carry out their own interpretations of their belief out of ignorance does not make it a Muslim’s fault. What happened is terrible and my condolences go out to those families that lost these brave men. As a Muslim American, I’m just as upset about what happened but will not be apologetic nor held responsible for that man’s action. Islam strictly prohibits the killing of innocent lives whether it be Muslim or non Muslim. To judge Islam’s 1.6 billion followers by the actions of .001% of its population is unrealistic.”

And this gentleman wonders why the Confederate flag was used as a prop in the video, given its own history and baggage.

“While I agree with most everything you have said, I personally feel that you displayed hypocrisy. To say that proud Southern citizens being represented by a false stigma attached to the Confederate battle flag, caused by the actions of actual racist lunatics, is wrong; however, saying that the actions of Islamic extremists represent all people who are Muslim, is hypocritical. The ratio of American Southern racists to American Southern non-racist’s is probably equal to the ratio of Islamic extremists to all who practice Islam. That being said, is it not unfair to ban all Muslims for the actions of a group of extremists? Would it be fair to ban all police since a small percentage are found to be corrupt? Is it fair to label all Southern Patriots as racist wannabe confederate slave owners because a homicidal racist was seen holding a confederate flag? It is not, and it is not fair to ban an entire religion based on a small group of extremists.”

The store has, according to the owner on Facebook, “doubled down on security,” after consulting with a store in Arkansas that pulled a similar publicity stunt.

They likely will have more to worry about than jihadis. The Council for American Islamic Relations has called for a Department of Justice investigation of the Inverness gun store.