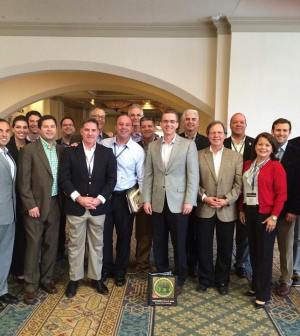 The Orange County Republican Executive Committee will consider establishing an independent campaign account to protect its local elected leaders from financial retaliation related to the ongoing feud over who will be Speaker of the Florida House at the beginning of the next decade.

The proposal stems from the conflict between state Reps. Eric Eisnaugle, projected to be speaker in 2021, and Blaise Ingoglia, chairman of the Republican Party of Florida. Earlier this year, Ingoglia approached Eisnaugle on the floor of the House to push for reforms over how future House speakers are selected.

In subsequent correspondence between party leadership and Orange County Republican Chairman Lew Oliver, the latter implied Ingoglia would be willing to sacrifice Central Florida’s three battleground seats to drain pledges from Eisnaugle. That would be done, in part, by the RPOF’s House campaign arm withholding resources from the re-election campaigns of Bob Cortes in District 30, Mike Miller in District 47, and the Republican nominee in House 49.

Ingoglia has denied such claims, but Oliver and local club leadership have prioritized protecting the incumbents by establishing such an account, which would be protected from any potential tampering from the state party.

After Ingoglia’s upset victory for party chair at the beginning of the year, employees from the previous RPOF administration immediately resigned. Ingoglia froze the party’s assets and barred the door to its Tallahassee offices. In the following hours, Senate President Andy Gardiner transferred $800,000 from the “Senate Majority” account reserved for races involving the chamber he currently oversees.

Florida Politics approached several members of OCREC who agreed to speak anonymously. Each enthusiastically supported the proposal, and enjoyed the potential local control they would have to protect their well-liked slate of incumbents.

The measure unanimously passed a subcommittee Monday evening, and will be brought forward for discussion and possible approval at the Aug. 27 general meeting.