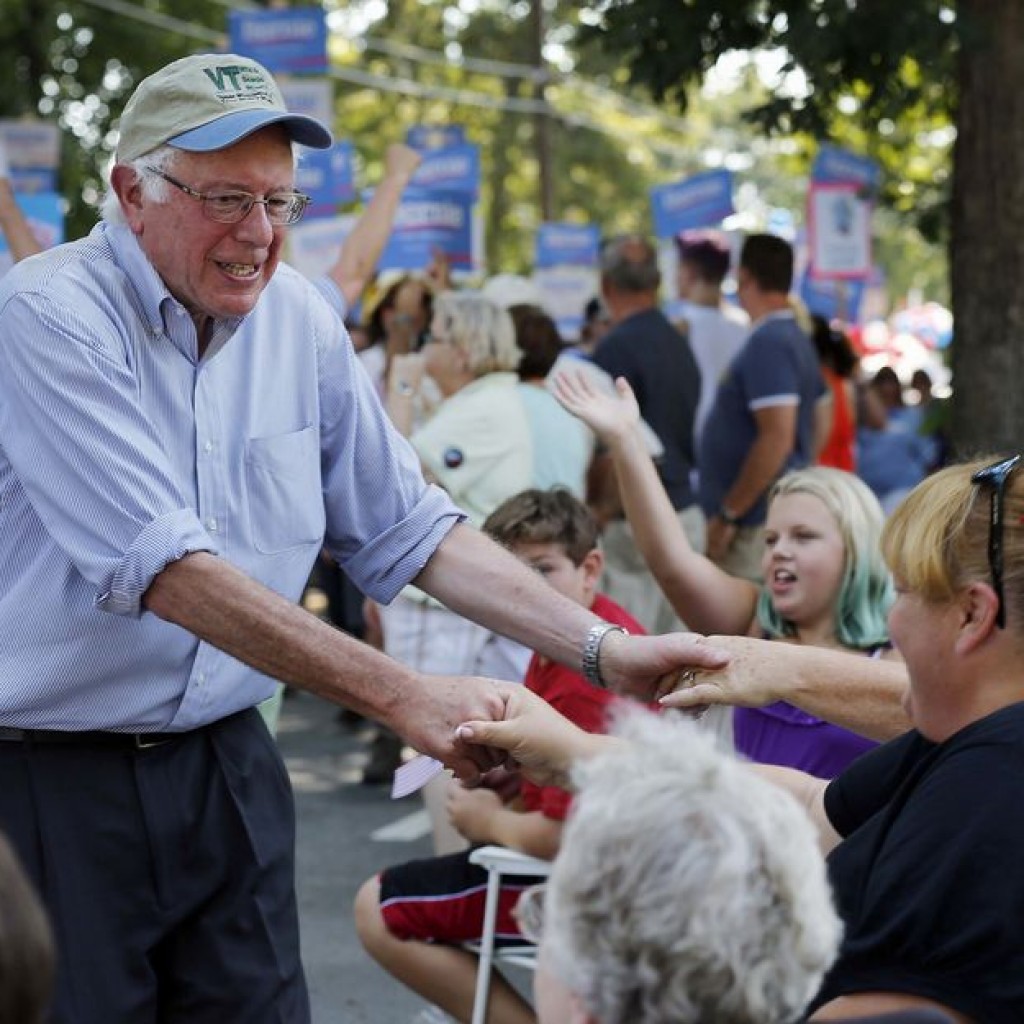 Bernie Sanders doesn’t kiss babies. He promises them a revolution.

“This is for you,” the upstart Democratic presidential candidate told 3-month-old Lily Landretti after an event in southeastern Iowa. He meant his insurgent campaign. Lily just kept gurgling.

In an age of carefully planned campaigns, the Vermont senator is different. A self-identified grump, Sanders gets angry, rolls up his sleeves and winds up drenched in sweat. Like Donald Trump in the Republican race, Sanders has been drawing big crowds and giving the buttoned-up candidates a run for their money.

For his supporters, Sanders’ grouchy persona is one of his charms. They say he feels like a real person, not a slick politician. They believe him when he bellows his unvarnished liberal message, pledging to work for single-payer health care, paid maternity leave and a higher minimum wage.

“I wanted to give him a hug,” said Lily’s mom, Jane Landretti, 37, of Madison, Wisconsin. She said he’s like a “very smart thinking grandpa.”

Eight years ago, Barack Obama offered a message of hope and change, presenting himself as a leader from a new generation. This time around, Democratic imaginations and hearts are fired up by a white-haired 74-year-old socialist who is riding a populist surge.

Although polls through most of the year have found Hillary Rodham Clinton with a strong lead nationally, Sanders has been gaining ground in recent surveys, especially in the key early states of Iowa and New Hampshire. Iowa Democrats who attended Sanders’ events during a recent swing said they just liked his style.

“I love a person who is going to stand up and be a straight shooter,” said Lynnea Ellison, 62, of Fairfield, who watched Sanders address crowds in the Grinnell town square. “I think he’s the perfect candidate.”

Trudy Magurshak, 66, of Grinnell, agreed that he does not come across as a normal politician who “wants to be your best friend. We want them to be real people.”

Chad LaRue, 54, of Ottumwa, waited to see Sanders open an office in his town later that day. He liked that Sanders could be rough around the edges.

“I think it makes him real,” he said. “Bernie is the anti-establishment candidate for me.”

Asked about his attitude, Sanders joked: “Me, grouchy?”

He attributed that trait to frustration with the political class and the focus on personality and rivalries over policy in a presidential campaign, “as if it were a baseball game or a soap opera.”

Even so, he’ll lighten up on occasion, as when he joked in New Hampshire on the weekend that as socialist, he’s out to rid the nation of pajamas in different colors and put everyone in flannel ones. He admires democratic socialist societies in Scandanavia, he says, not the North Korean model.

Sanders’ standard campaign speech can run close to an hour as he riffs on notes scrawled on paper, no teleprompter.

He’s been known to lecture a crowd, as when he grilled graduate students and their professors in the summer about U.S. policy on paid sick leave, then barked: “What are you teaching these guys? Do you know anything?”

He pledges to fight income inequality, eliminate student debt, expand Social Security and tackle institutional racism. He concludes with a call to join his “political revolution” and the crowds explode with applause.

At times, Sanders brusque persona seems to extend off the podium. Recently in Iowa, he spent only limited time shaking hands or chatting with people after events. His staff said that was mostly because of a tight schedule.

Spokesman Michael Briggs said Sanders often does make more time for fans. “We must have taken 10,000 selfies over the last couple of months,” he said.

But Sanders is no lingerer. “Very quickly, very quickly,” he said to one man requesting a photograph after an Iowa event in June.

For some people, Sanders’ unfiltered attitude is a welcome change from Clinton’s more controlled style. She’s also perceived as more of a political insider, though both have experience in elected office.

Those who could not get close to Sanders in Iowa were not put off. Jeff Poulter, 57, of Middletown, brought his copy of Sanders’ book “The Speech” to an event, seeking an autograph. But Sanders left before he could get close enough to ask.

“It’s a mob,” Poulter said. But he said he was glad Sanders spent his time talking about policy on stage instead of shaking hands. “I think I’d rather hear the details.”