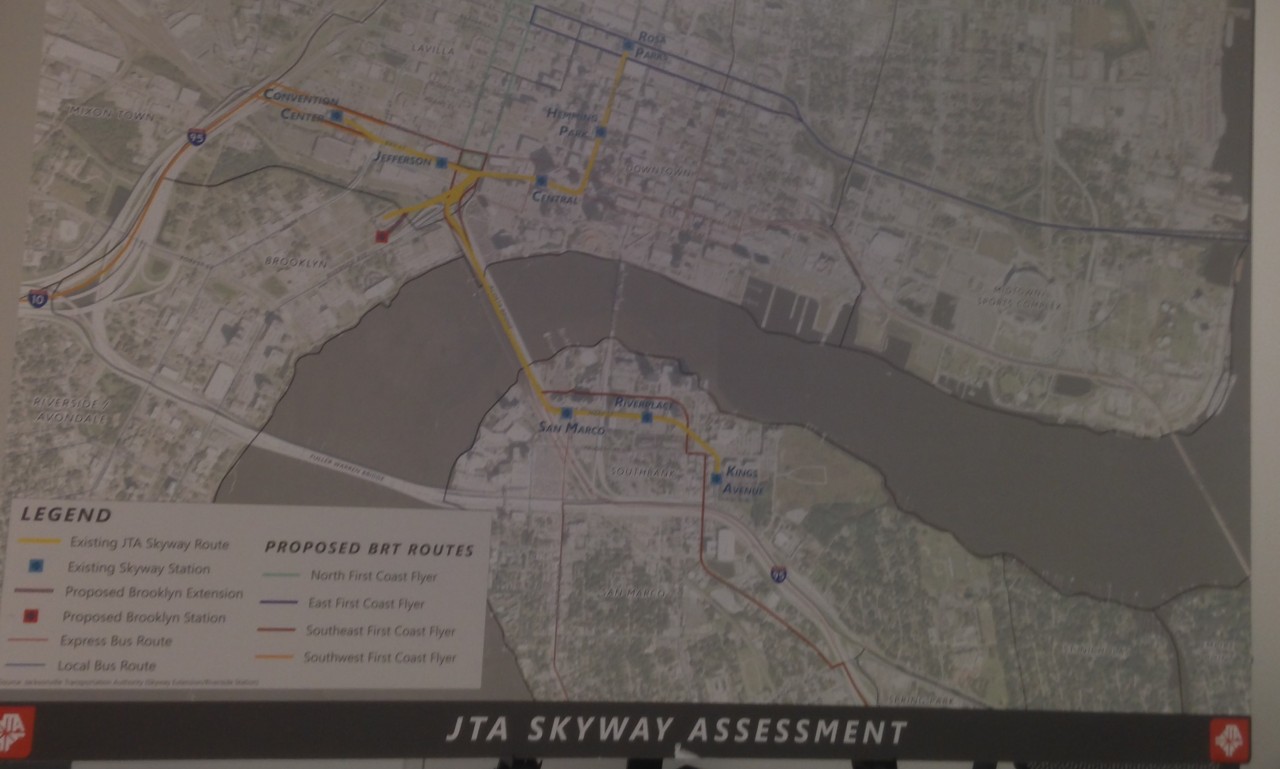 On Monday afternoon, the second meeting of the Jacksonville Transportation Authority Skyway Advisory Group convened in the JTA Boardroom, as group members weighed a variety of options regarding what to do with the Skyway as it approaches its 30th year in existence.

Options range from tearing it down completely, to decommissioning it and letting it become entirely obsolete, to revamping the structure to give it a new lease on life.

The question of whether Jacksonville should cut bait on the Skyway or put more resources into it, including even expanding it to the Brooklyn neighborhood, is one that has vexed Jacksonville residents for some time.

These questions are even more vexing as some system components hurtle toward the end of their lives.

This, the second of six meetings, is intended to help address questions such as what way forward is best for the Skyway, its connection to downtown development and mobility, and its connections with the larger transit system.

The previous meeting, said Brad Thoburn of JTA, was at a “30,000 foot” level. This follow-up, he added, is more of a “drill down,” including incorporating answers from customer questionnaires, and going into more detail on the condition of the system. As well, examination of what “peer cities” are doing was on tap.

The Skyway Condition Assessment: It’s safe, but “showing its age,” in terms of vehicles, the operating system, and the infrastructure.

Of the 10 vehicles on the fleet, four are out of service and being used for parts.

A “very long lead time” for repairs, including boards, which are no longer in production, but some replacements were found via a nationwide search.

As well, there is a “wobble issue” at the Hemming Plaza station: JTA is confident that they can resolve that issue, and they developed the solution in house.

Repairs are complicated by the fact that Bombardier, which manufactured the trains in use, has one repairman, who retires at the end of the year. Thus, JTA has someone in Philadelphia this fall learning how to repair the trains.

The operating system, which supplies the power to the train, is “old and obsolete,” yet it is being upgraded this year.

The stations, by and large, are in good condition. Yet even there, there are issues with roofs, elevators, and escalators.

Planned capital improvements this FY include remedies for many of these issues, as well as lighting and drainage fixes as needed. These are covered by the $4 million earmarked in the current city budget, in part, though the total capital improvement budget in the coming years is significantly higher and will be contingent on Council approval.

Whether the system is overhauled or replaced, capital improvement costs are unavoidable.

The discussion then pivoted to skyway options, regarding overhaul, decommissioning, and replacing vehicles.

Jacksonville’s elevated and automated system does have strengths, including generally being on time, and a higher frequency of arrival times.

However, some caveats were issued. Extending the system into historic areas, for example, could meet with community resistance due to the obtrusion of the structure itself.

Other transportation options were discussed, including streetcar systems, which were described as a “very effective tool for tourism or economic development.”

Surprisingly, a streetcar system with dedicated right of way can have its cost approach that of the current elevated system. As well, river crossings present yet another challenge. And streetcars, heavier than the current cars, would not be accommodated by the elevated system.

One advantage of streetcars: the FTA would consider them, if used as a replacement for the Skyway, an offset, which would free JTA from potentially having to pay back the funds previously granted by the Feds.

Circulator buses were also discussed, which would fit with the BRT infrastructure of the First Coast Flyer.

Personal Rapid Transit was still another model considered, though Jacksonville would again hazard the risk of being the pilot program.

One potential non-transit repurposing option considered, the Highline, would turn the system into an elevated park. Repurposing costs for a similar project in New York ran up to $200 million.

“The highline is sexy,” said Husein Cumber, but density and development are what makes that work.

And Jacksonville doesn’t have enough of that to make it viable.

The discussion then moved to what peer cities are doing, including streetcar systems in Tampa, Charlotte, Memphis, and Kansas City, and BRT systems in Orlando.

From there, discussion moved to the questionnaires distributed to riders.

The survey was completed Spring 2014, revealing that 55 percent of riders are male, and 13 percent are disabled.

78 percent have household incomes below $50,000, and 55 percent of users took the bus to the Skyway, supporting the proposition that it is a source of uplift for those of modest means and is integrated with the larger JTA system.

The FY 16 Skyway operating budget, of $6.3 million, is in line with previous years.

Some existential challenges must be considered. For one, federal and state funds are becoming stingier of late, and the grant process appears likely to become more competitive in the next decade. This could leave Jacksonville’s City Council responsible for bearing a larger burden of these costs… a fun burden to bear in light of the findings of the Curry administration’s 90 day audit revealing extraordinary budget pressures from the unfunded pension liability.

Committee member Jeanne Miller noted that the city’s potential liability must be considered in light of the potential economic benefits to downtown. Downtown Investment Authority head Aundra Wallace added that this system would fit into the BRT system, saying that the Skyway could be an “integral player” in downtown plans.

JTA liaison from Council, Tommy Hazouri, said that whatever happens needs to be part of a “Jacksonville solution,” echoing Mayor Lenny Curry’s language used in a different context.

Public hearings regarding the future of the Skyway start Oct. 26.