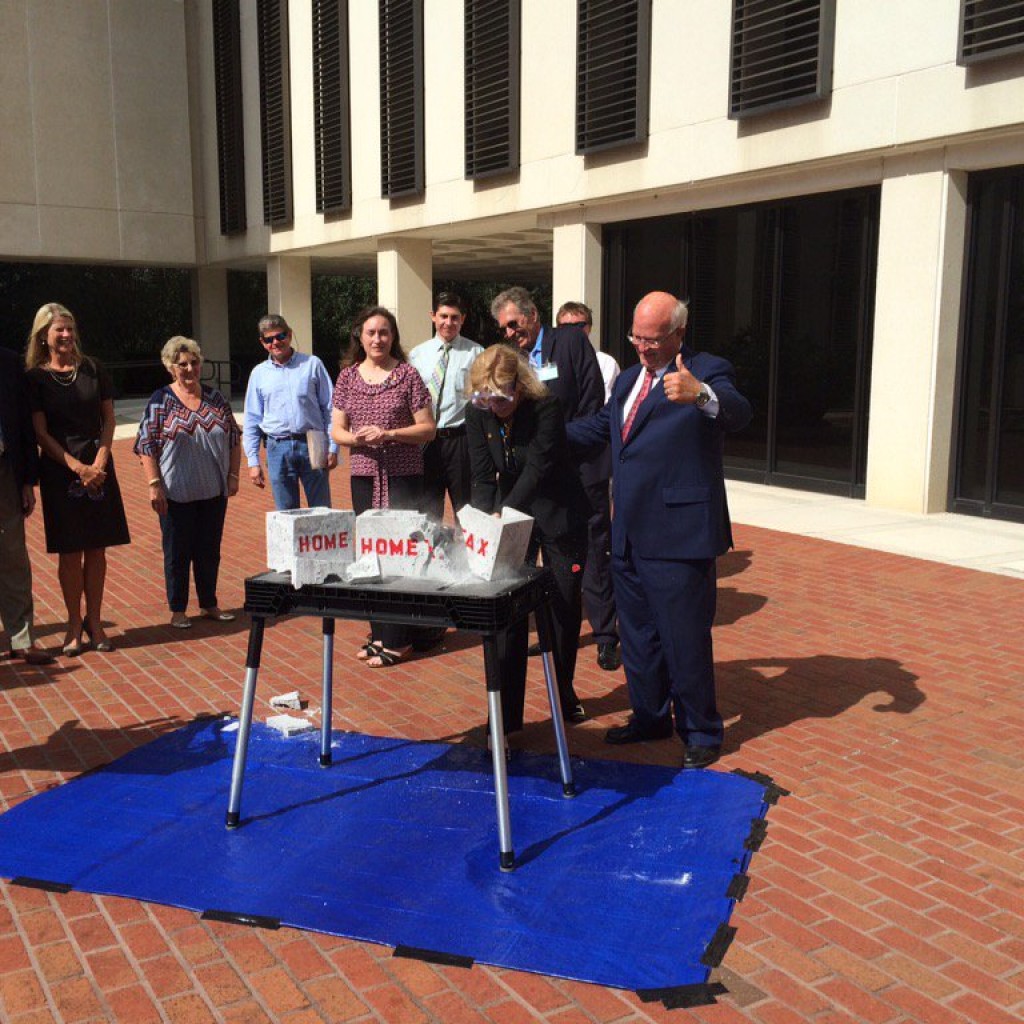 A gaggle of Republican House members gathered outside the Capitol Monday morning to register their opposition to a bill they call the “home tax” – and to smash it in effigy.

“Any time you are taking money from homeowners, it’s a tax hike,” Rep. Dennis Baxley said. “We always have to be vigilant because increased costs to homeowners can come coded in other language. It’s still a tax!”

The bill in question is HB 203, which would shift the burden when it comes to documents that detail outstanding fees owed on a home or condominium – called letters of estoppel – from title companies, which currently bear responsibility for defining those costs, onto homeowners’ associations (HOAs) and condo associations.

Baxley was joined by Reps. Heather Fitzenhagen, Debbie Mayfield, and Ray Pilon, a Realtor and an HOA resident himself.

“This bill will impose greater costs on our homeowners and our associations all over the state,” said Mark Anderson, a lobbyist who represents an association that represents community association managers.

“We are asking our lawmakers to hear our voice and to act accordingly as they did last year by not passing this legislation,” Anderson said.

Roger Kesselbach, who represents hundreds of HOAs and condo associations, came to Tallahassee to oversee the Hulk-esque legislative gesture.

“I’ve traveled all throughout the state since the end of Session last year and met with numerous residents who live in associations throughout the state,” said Kesselbach, president of the Space Coast Communities Association, “and I can’t find one who thinks this is any good.

“It’s a tax on our senior citizens and all of the people who live in communities,” said Kesselbach, who said passage of the bill would increase monthly or annual HOA and condo fees by a rate of “anywhere from 10 to 20 percent.”

Anderson also announced the launch of a new website devoted to the issue, SmashTheHomeTax.com, created in part by Tallahassee communications strategist Kevin Cate.

Anderson has estimated the cost of estoppel letters as between $15 to $400, costs currently paid up front when the letters are ordered by the title agent. The bill would transfer those costs onto the HOA or condo associations.

Democratic Sen. Gwen Margolis of Miami, for her part, said last year she thought both the bill and its opposition by condo associations were much ado about very little.

“All they do is punch a button on a computer,” said Margolis, the Senate’s longest-serving member. The associations “never see a problem … until they have to pay … It’s been a ripoff for a while.”