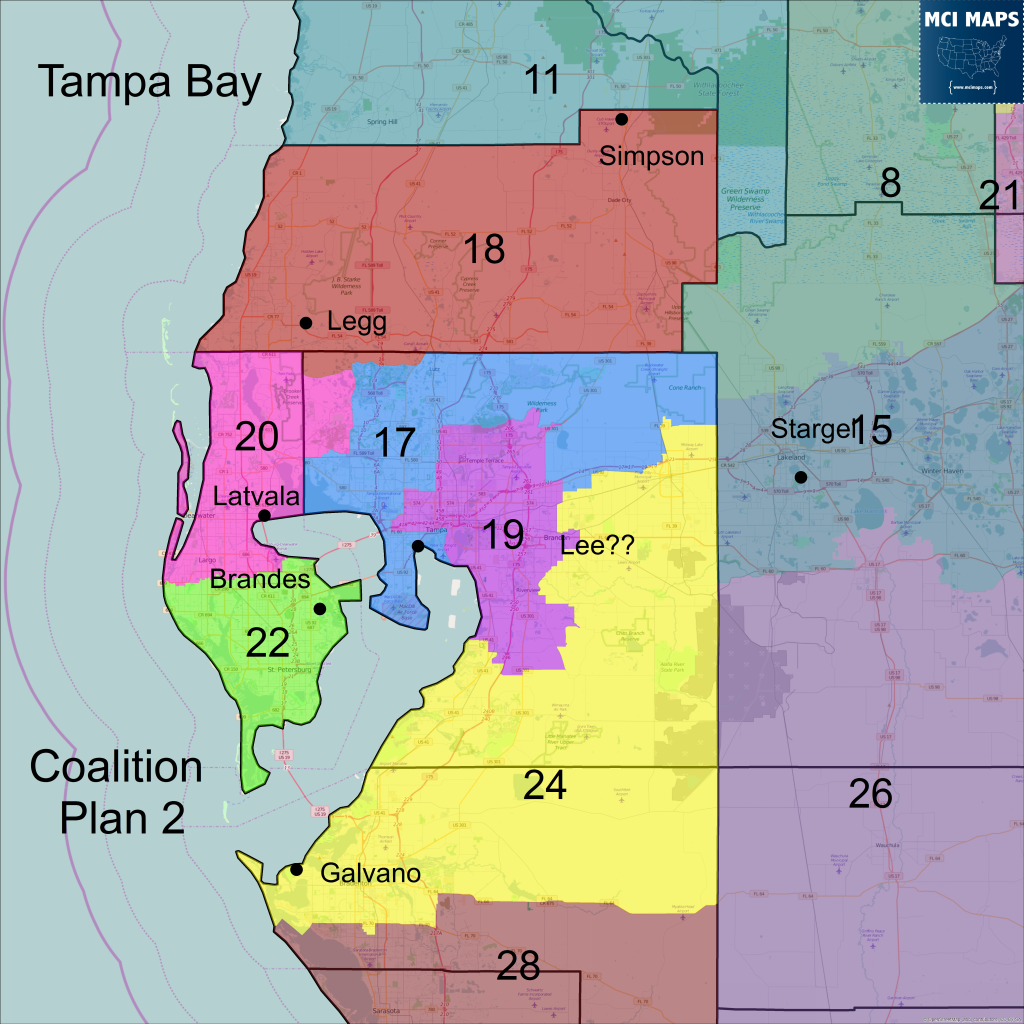 A good deal has happened with the ongoing redistricting saga during the past several days. The state Senate passed its proposed districts with a controversial amendment attached. The House redistricting committee passed their own amended version of the map, and the coalition plaintiffs now have put forward three proposals.

We’ll now look over each development. 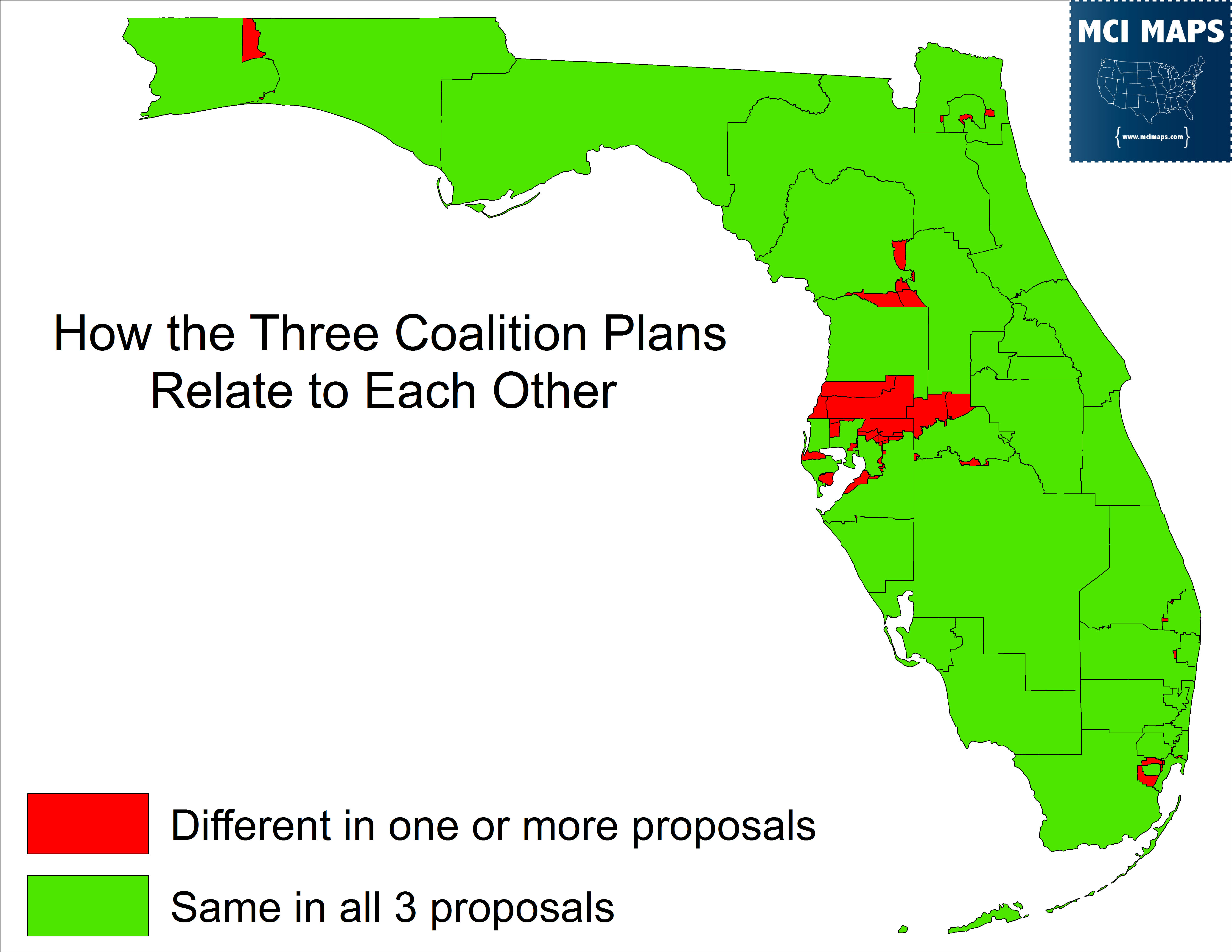 The biggest differences between the new coalition plans compared to their initial proposal are in the Tampa Bay and Miami areas.

Down in Miami, which is the same under both new proposals, the borders were shifted to allow the 38th to take in more Hispanic voters, bringing its 2012 General Election makeup to 51 percent Hispanic, with 49 percent in 2014. This effectively creates a fourth Hispanic seat in Miami-Dade. 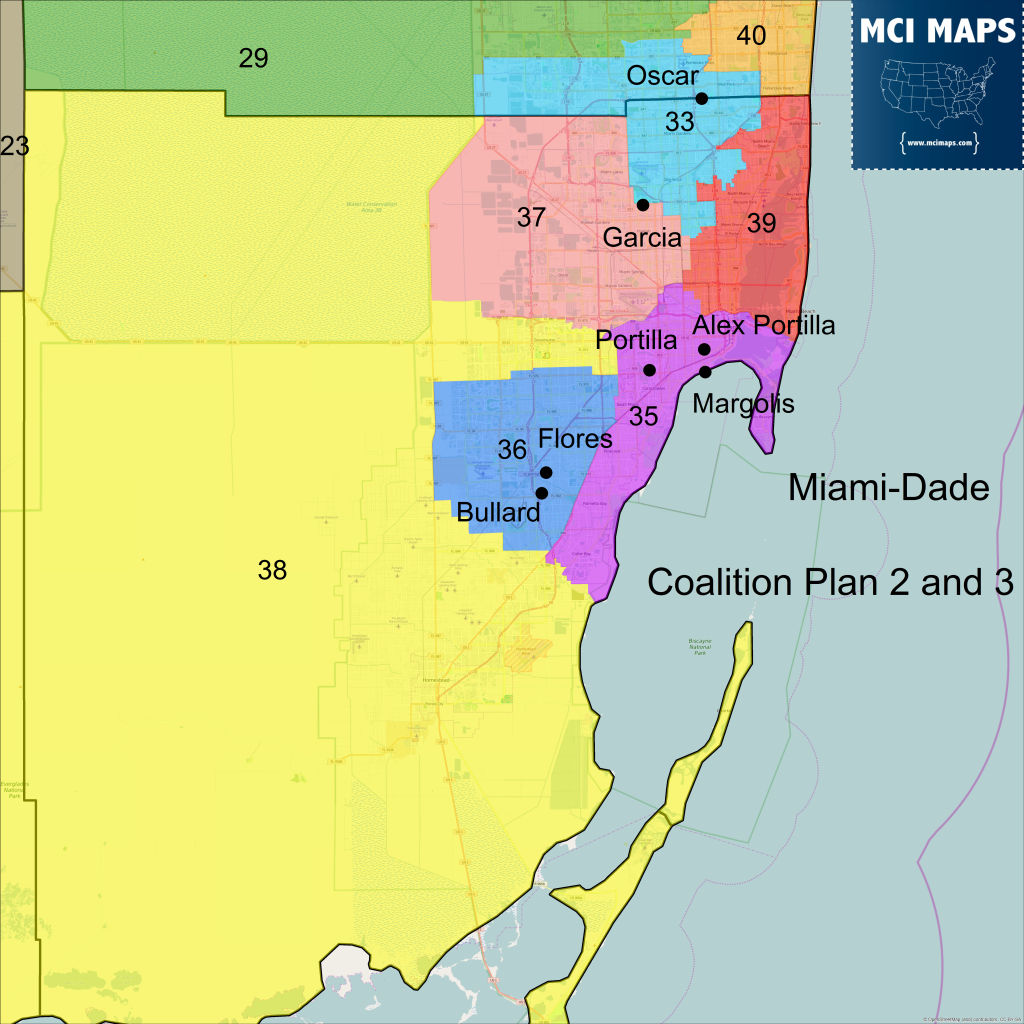 Meanwhile, the 36th would become more Democratic, 54 percent Obama, which could spark Anitere Flores to run in the 38th, while Dwight Bullard remains where he is. Any candidate in the 36th would still need the support of Hispanics, who make up about 60 percent of the General Election, to win the seat. While the partisan and ethnic makeup of the representation would depend on who runs where and which seats are targeted, there are effectively four seats where Hispanics control the election. No other districts in the county change compared to the first coalition plan.

Over in Tampa, the coalition has two different proposals. Its third plan (SPUBS0204) is nearly identical to its initial proposal from last week, but its second plan (SPUBS0203) finally does what I have been asking to see, an African-American seat that doesn’t cross the Tampa Bay.

The African-American share of the 2012 and 2014 primary for this district is just above 50 percent. The border is different from my proposals here, though it does seem to be more mathematically compact. Jeff Brandes’ district becomes more Democratic under this proposal, going to 56 percent Obama. The plan keeps Pasco whole, which would pair Wilton Simpson and John Legg against each other. That could also spur Mike Fasano to consider entering the fray.

The second coalition plan is still a 20-20 Obama/Mitt Romney map. The plan doesn’t have the extra Obama seat in Alachua like the first proposal did, but it has another Obama seat in Miami-Dade. 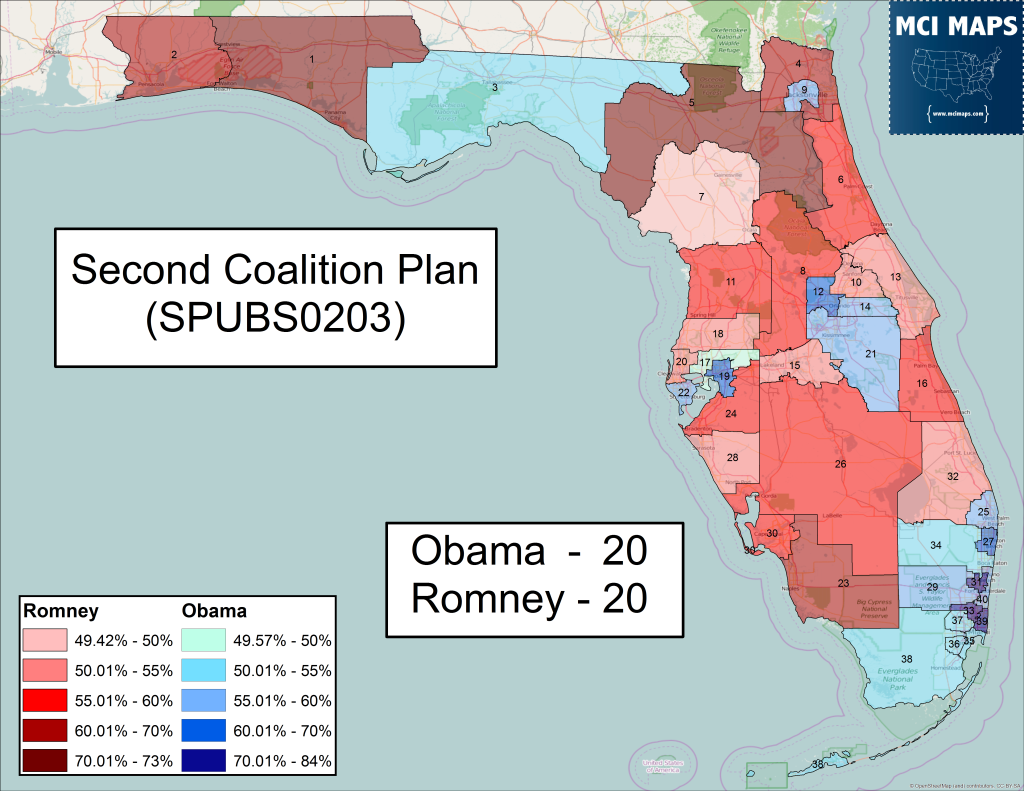 The third plan, which largely just changes Miami-Dade and some other borders, is 21 Obama districts, 19 Romney districts. This is thanks to retaining the white Obama seat in Hillsborough and adding another Obama seat from Miami-Dade. Of course, none of these numbers actually indicate which party the senator will be from, especially in Miami. 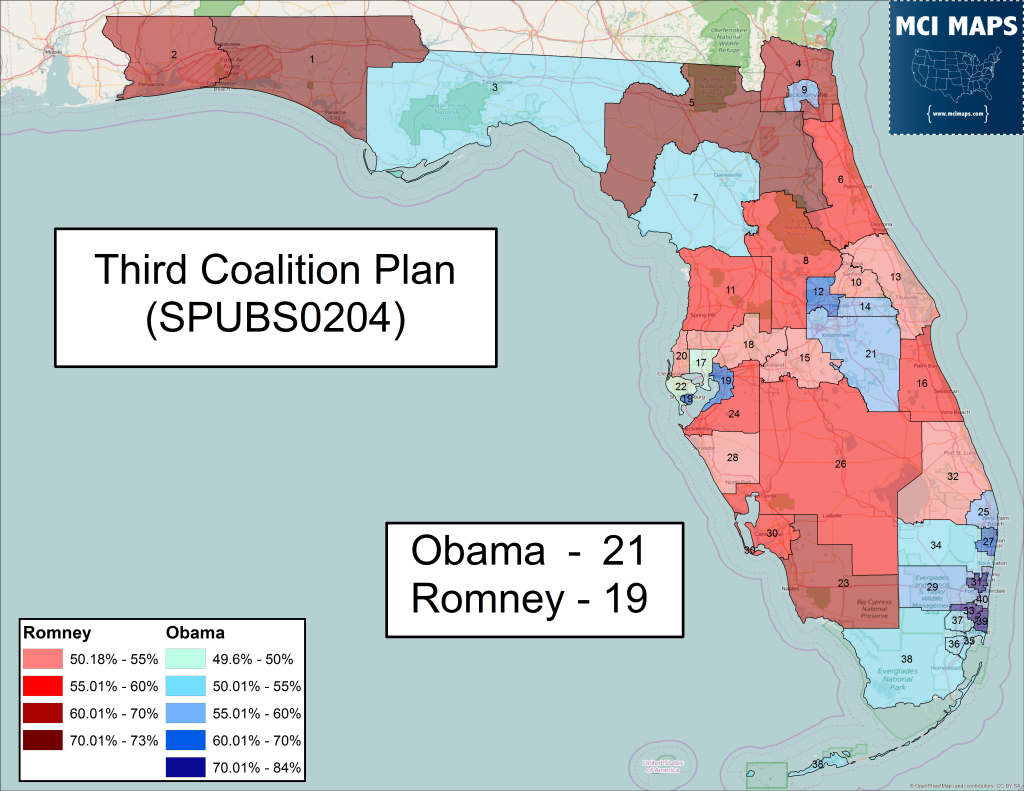 The presidential makeup of the three plans can be seen on a grid below. 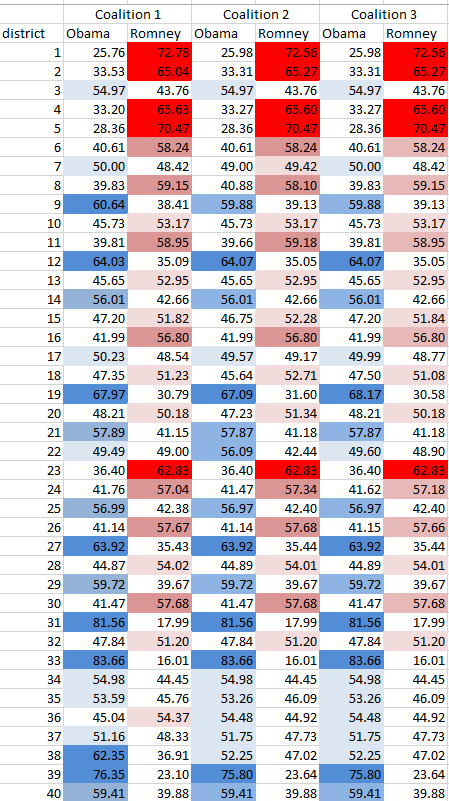 Now that we have reviewed the plaintiffs’ plans, what about the Legislature itself?

The Senate redistricting committee initially passed Base Map 9078, one of the least compact plans offered, which also did not offer the fewest county or city splits. The map had been chosen by Senate redistricting Chairman Bill Galvano. Check out my article here to see more on plan 9078.

When the plan was being debated on the Senate floor, Sen. Miguel Diaz de la Portilla (DLP) offered an amendment that redrew the lines in Miami-Dade. His claim was that the changes were necessary to ensure there were three Hispanic seats. The changes just so happened to ensure that he and his brother, Alex Diaz de la Portilla, would have a Senate seat perfectly carved out for them. 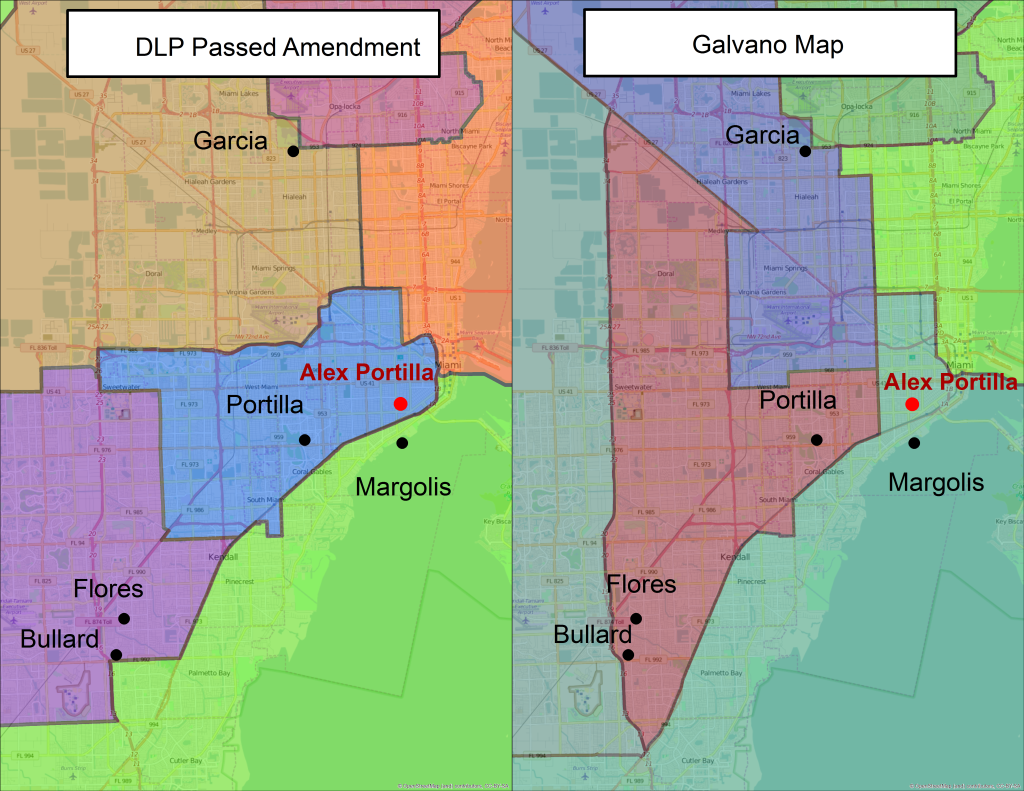 DLP contended there had to be three Hispanic seats in Miami-Dade and that the Senate base map 9078 didn’t have three. However, the data show that districts 37, 36 and 38 (under that base map) had Hispanic shares of the electorate in 2012 ranging from 58 percent to 79 percent. In addition, the 35th under the plan was 46 percent Hispanic in the 2012 general.

DLP’s amendment packed Hispanics to make three Hispanic seats where any of the three had no less than a 69 percent Hispanic share in 2012, eliminating a potential fourth access seat altogether. This redraw reeked of partisan intent and became a flash point of the debate over the map.

The amendment created a firestorm as a clear Tier 1 (benefiting an incumbent or party) concern. When the House redistricting chairman, Jose Oliva, was asked about it, he expressed concern about Tier 1. When Oliva released his proposal, he did not include the DLP amendment. His plan was similar to the Senate in most areas, minus some border shifts, and similar to the coalition plaintiff’s first plan in Southeast Florida. Olivas’ proposal was nearly identical to the first coalition map in Miami-Dade and similar in Broward and Palm Beach. The difference between Oliva’s amendment and the Senate amendment is below. 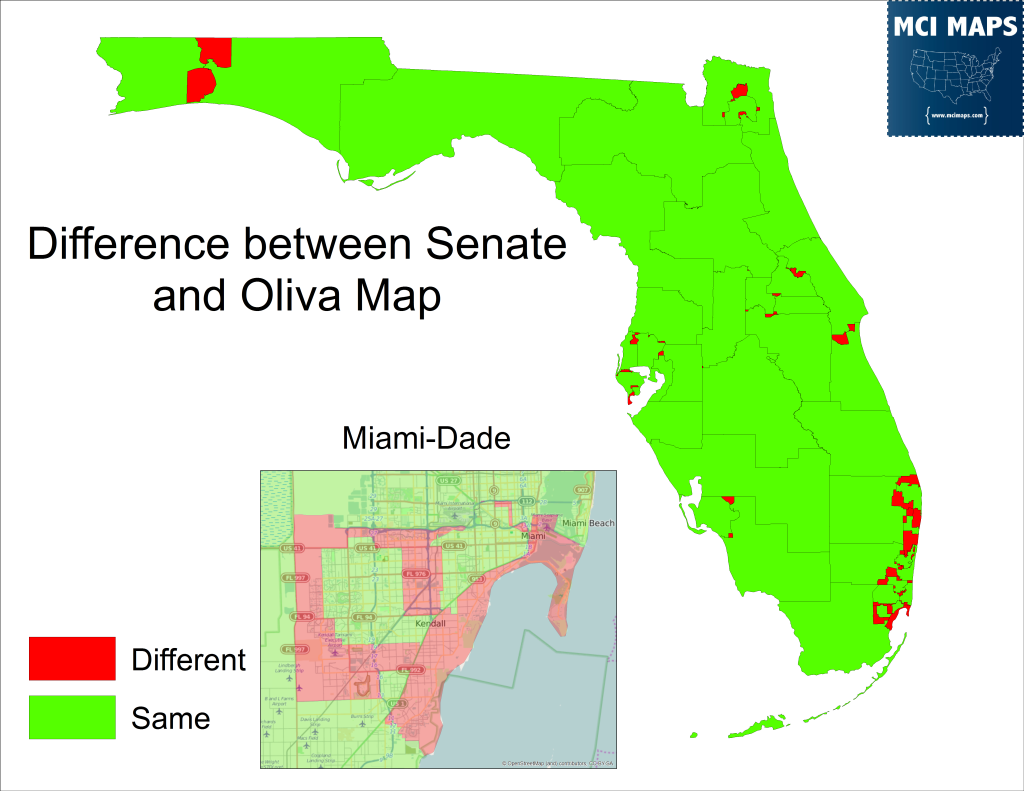 Oliva’s amendment passed the House redistricting committee and heads to the full floor. Oliva’s plan is better than the Senate plan because it removes the DLP amendment. However, it still crosses the bay to Pinellas when it is not required to create an African-American seat. One notable difference is that the Oliva map only splits 13 cities compared to the 20 split in the Senate map. However, the second coalition map get city splits down to nine.

No one is sure whether the House and Senate will come to an agreement. After all, the chambers failed to agree on congressional redistricting when the dispute was over a small amount of land. In addition we now have three proposals by the plaintiffs. The courts will have plenty to pick from when we eventually arrive at trial.