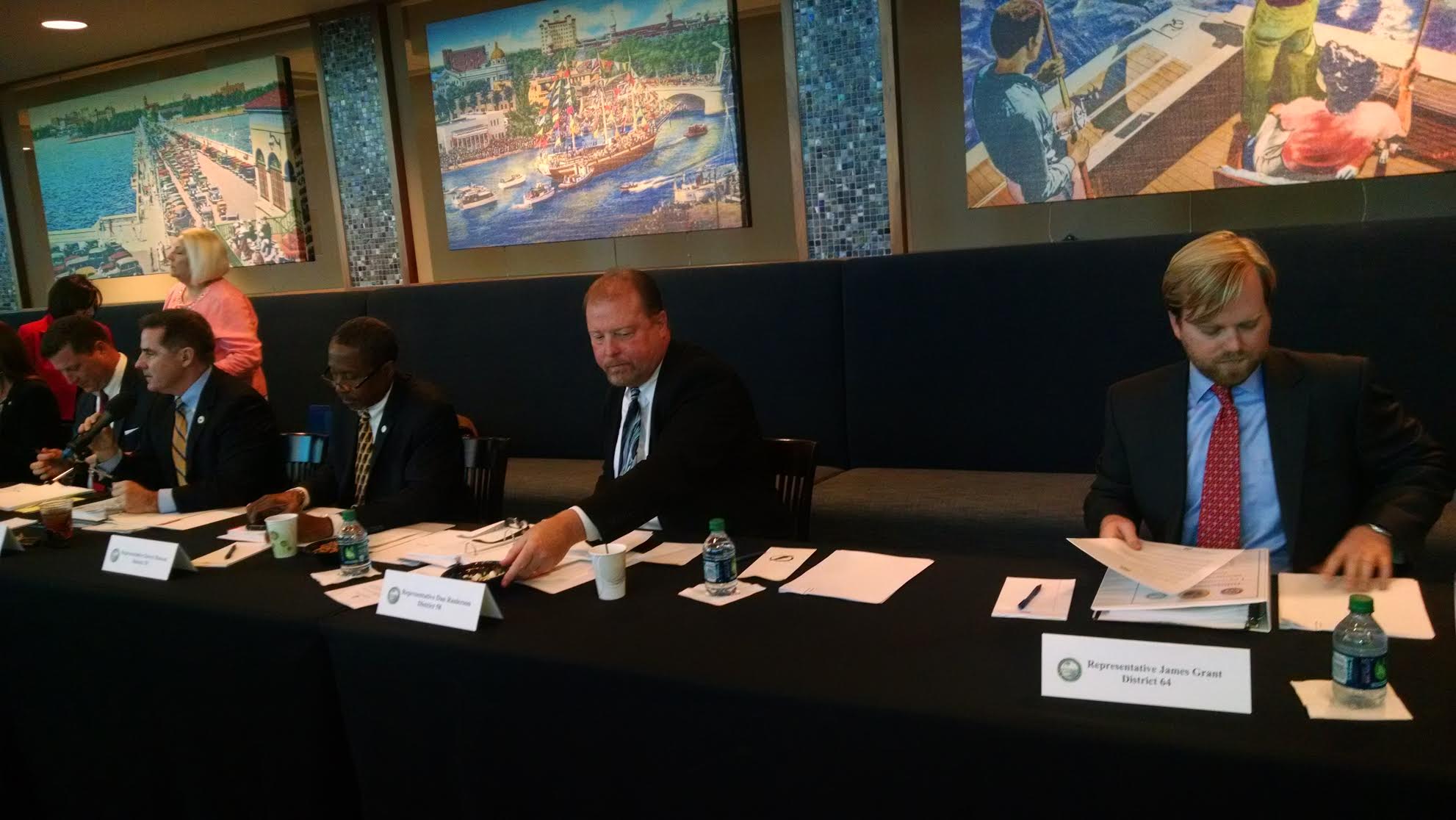 The Hillsborough County Legislative Delegation spent hours (and hours) on Tuesday discussing proposed legislation that would bring ride-sharing companies Uber and Lyft into compliance with the Hillsborough County Public Transportation Commission, but whether they actually moved the issue forward at the end of the day is dubious.

The setting for the local group of state lawmakers to convene was the Firestick Grill, described as an “upscale buffet” that happens to be located inside the cavernous Amalie Arena. Dozens of people, including lobbyists, public officials and members of the public stood in the back of the room or in an adjacent room as there was little room to contain all who came for the meeting, which took place just a month before the 2016 Legislative session kicks off in Tallahassee

On a nearly party-line vote (St. Petersburg based Rep.Darryl Rouson joined the majority of Republicans on the panel) the delegation approved a measure sponsored by Plant City Republican Dan Raulerson that would establish a new regulatory framework for allowing Uber and Lyft to operate legally in the county.

Although Raulerson’s name was on the bill, it was Tampa’s Dana Young who provided a “strike all” amendment that dominated the proceedings.

In introducing her measure, Young referred to the ceremony held just across the street from the Amalie Arena earlier on Wednesday, where the groundbreaking ceremony was held for the USF Medical School’s move to the Channel District.

“We talked about how innovative our city is becoming. We need to stay at the forefront of innovation to continue to grow as a city,” she said before adding that the regulatory requirement set forth in her amendment was consistent with the laws regulating such ride-sharing companies in 24 states, and over 31 localities.

Officials with the PTC have said they hoped that an answer to solve the conflict with Uber and Lyft could come from the state Legislature. Uber and Lyft began offering their services in Hillsborough in April of 2014, and immediately became a local sensation, as has been the case in other cities in the U.S. and across the globe.

Young’s amendment would require TNC’s to operate in Hillsborough by being required to provide insurance at the three different stages that an Uber or Lyft driver is in the process of picking up a passenger.

The first stage, when the driver was offline they would have to provide insurance from their personal carrier. When the driver turns on the app but before they accept a fare, the ride-sharing company would pick up the insurance, for $50,000 bodily injury, $100,000 for incident, and $25,000 for property damage. Once the driver accepts the trip (But before the passenger was in the trip), the insurance would be $1 million for liability and $1 million for uninsured motorist.

When questioned by Rouson about whose background check policy would be stronger, the checks that Young was proposing or the Level 2 background checks that the PTC requires of taxi cabdrivers, Young said she couldn’t say, just that they were different.

That proved to be a bridge too far for Ybor City-based House Democrat Ed Narain when the amendment came up for a vote. He said the insurance requirements didn’t faze him, but he didn’t believe that Young’s background checks provided sufficient safety for riders.

Another troublesome spot that was torn apart by critics was Young’s proposal (similar to the bill pending in the state House sponsored by Shalimar Republican Matt Gaetz) that would require TNC’s to pay just $5,000 to register with the PTC.

That is dramatically less than the permits that taxicab companies in Hillsborough County must currently pay.

Three of the four Democrats in the delegation — Narain, Tampa state Rep. Janet Cruz, and Tampa/St.Pete state Sen. Arthenia Joyner all voted no on Young’s measure, and it was Joyner who was the most outspoken in articulating the group’s opposition.

“Why are we doing this when it can be killed by one senator?” Joyner asked. “Is this a ‘get ready for Tallahassee exercise?'” she asked, as parts of the audience laughed and then began cheering.

Joyner’s point was relevant. Legislators in Tallahassee say they are poised next month to begin creating regulatory rules for the entire state, as Hillsborough is by far not the only local government that has had issues in working with the ride-sharing companies.

But Young said there were legitimate reasons for the delegation dealing with now.

“This specific issue has been the subject of protracted and expensive litigation here in Hillsborough County about the ability and the authority of the PTC to regulate TNC’s. Our citizens want this service. That is unquestioned.”

The second reason she said was her doubts that some important members of the Legislature don’t want to pass such a bill, which she said would lead to “another year of uncertainty, litigation and citizens here in Hillsborough County that are potentially denied a service that they very, very dearly want.” Young said if statewide legislation does pass in 2017, there would be a “seamless transition” in the county, having already passed such a bill.

At the end of the discussion, the measure passed, but as Senator Joyner noted, it only takes one senator to kill it in Tallahassee. And she should know, since she used that exact legislative maneuver to kill a bill that the local delegation passed regarding the county’s Civil Service Board back in the spring of 2014.

Meanwhile, St. Petersburg state Sen. Jeff Brandes and Tampa Rep. Jamie Grant once again introduced a bill that would outright kill the PTC. Brandes mentioned previous scandals involving PTC officials over the years as the casus belli for its elimination. “In light of these issues, I believe that this entity represents the worst of the bureaucratic crony capitalist system,” he said. “No there county in the state has an entity like the PTC, and it’s my firm belief that we should repeal this entity.”

However after introducing the bill, Brandes immediately said he would delay action until other PTC bills came before the delegation. At the end of the meeting, he and Grant meekly said they were temporarily delaying it, meaning that the troubled agency will continue to exist, at least until a similar bill probably is reintroduced in another year.