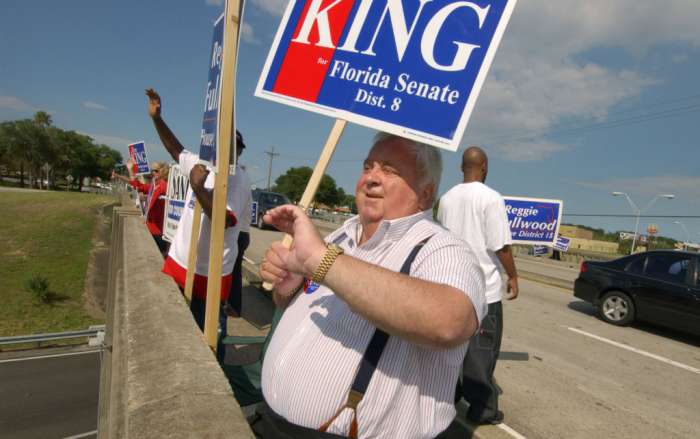 After Jim King became Florida Senate President in late 2002, he did something that today might seem radical on both sides of the aisle: He elevated members of the other party.

Just a few weeks earlier, Florida Republicans had reached a new zenith in their political ascendancy. For the first time in modern history, not a single Democrat would serve in the governorship, Cabinet, or legislative majority.

Though Democrats had won the last two U.S. Senate elections, and had battled to a virtual draw in the 2000 presidential contest, Republicans now fully controlled the state agenda.

“There is some very good talent in the Democratic caucus and we as a majority party should not let it go to waste,” he said. “I am hopeful that with this blending of bipartisan talent, we will build a united Senate, committed and ready to tackle the issues facing us these next two years.”

King’s action was not merely symbolic. Smith was given the huge task of transitioning court funding from counties to the state as part of a new constitutional mandate. Campbell was placed in charge of finance and tax policy in a challenging budget year. Geller would oversee comprehensive planning and Lawson would focus on natural resources.

King immediately faced dissent. “Jim caught a lot of flak,” Smith remembers. “But he didn’t care. He wanted to send a bipartisan signal.”

Smith recalls that one former senator “threw a fit” about King’s efforts to reach across the aisle. The Senate president’s response was a classic Jim King one-liner: “Thank you for reminding me why nobody here likes you.”

King’s bipartisanship was contagious. “He reinforced my view that not all good or bad ideas belong to a single political party,” Smith said. “Jim built bipartisan coalitions; not because that was his only route to 21 votes, but because he felt the institution was better served by consensus.”

Over the course of his legislative career, King’s bipartisan approach paid dividends on the issues that mattered most to him, such as the passage of Florida’s death-with-dignity law, protection of the St. Johns River, and reform of education funding formulas. But as much as King was committed to bipartisanship, Smith says he was even more dedicated to preventing Senate politics from becoming personal. King’s chief allies in that effort were friendship and humor.

“Jim believed that once you knew someone well – about their family, friends, and interests – it would be much harder for you to be personal in your politics with them,” Smith explained. “So he would take diametrically opposed people out to dinner and drinks so we could develop genuine friendships. It worked. We got to know each other better, and we bonded over the fact that we could neither stay out as late as Jim nor look as fresh as he did the next morning. He was the poster child for Alka-Seltzer.”

King also employed what Smith called a “hilarious sense of humor” to defuse tension in the Senate process. His blend of camaraderie and wit earned him close friends, who were crestfallen at King’s death from cancer in July 2009. They still think about him often, and gather each year to honor his memory with storytelling and laughter.

Despite King’s bipartisanship, he did on at least one occasion ask Smith to become a Republican. The former prosecutor responded with Jim King-like humor. “I have been a Democrat and a Southern Baptist all my life,” Smith told King. “While I may be a poor example of both, I’m not switching from either.”

With the circuit court recently approving a new Senate map that creates a competitive North Central Florida district, some have approached Rod Smith about rejoining the Florida Senate. Although he’s undecided, if Smith does run and is elected, expect him to honor what he says is King’s greatest legacy.

“Jim King taught me how the legislative process should work,” said Smith. “He led with an open hand, not a closed fist. He simply wanted to work with others to make things happen.”

Chris Hand was chief of staff for the city of Jacksonville and was press secretary for U.S. Sen. Bob Graham. He and Graham are writing a book about effective citizen participation in government.