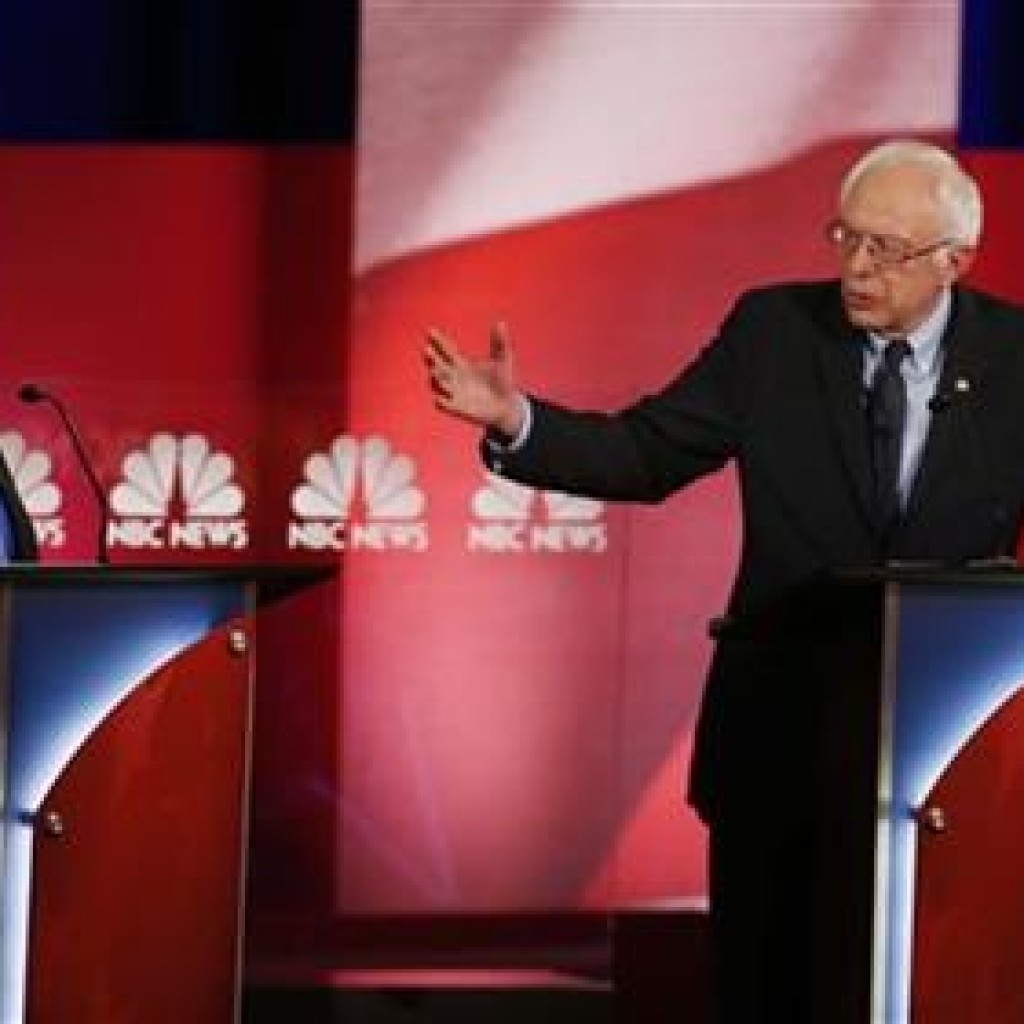 In their final debate before the Iowa caucuses, the gloves came off between Hillary Clinton and Bernie Sanders.

Shouting over each other at times, the two leading Democratic presidential candidates engaged in some of their toughest exchanges of the campaign on Sunday night, underscoring the narrowing race between them in the first-to-vote states of Iowa and New Hampshire.

Clinton sought an advantage over the Vermont senator on curbing gun violence. Sanders, meanwhile, twice assailed the former secretary of state for accepting big money in speaking fees from Wall Street, drawing some boos as he did so.

Healthcare emerged as a major dividing line, placing the future of President Barack Obama‘s health care law in the spotlight. Just two hours before the debate, Sanders released a proposal that would create a “Medicare for all” health care system funded by higher taxes on middle-class families and the wealthy. Clinton warned that reopening the health care debate would put Obama’s health care law at risk.

Trailing in preference polls by a wide margin, former Maryland Gov. Martin O’Malley tried to enter into the conversation with mixed results.

Here are some takeaways from Sunday’s Democratic debate:

Sanders and Clinton came to the debate stage loaded with stinging attacks for each other — and they were ready to use them.

Questioning her commitment to policing excess on Wall Street, Sanders twice invoked Clinton’s receipt of lucrative speaking fees after leaving her post as secretary of state in early 2013. “You’ve received $600,000 in speaking fees from Goldman Sachs in one year,” Sanders said pointedly.

Clinton tried to turn the argument back on Sanders, suggesting his criticism of financial regulations was a knock on Obama’s receipt of donations from Wall Street during his two presidential campaigns.

She also pointed out that Sanders once called Obama “disappointing” during the president’s first term and suggested the senator wanted someone to run against Obama as he sought re-election in the 2012 primaries.

“Your profusion of comments about your feelings towards President Obama are a little strange given what you said about him in 2011,” Clinton quipped at one point.

The exchanges were a far cry from the first debate of their campaign, when Sanders famously refused to attack Clinton for her use of a private email account and server during her time as secretary of state.

In some respects, the debate crystallized one of the main differences between Sanders and Clinton: passion versus practicality.

His voice rising at times, Sanders offered a rousing case for a massive expansion of government: a universal health care system paid for with higher taxes, free college tuition and a generous system of paid family leave for workers. But he faced questions over how he would pay for it all.

“A little bit more in taxes, do away with private health insurance premiums,” Sanders explained. “It’s a pretty good deal.”

Clinton said her policies were superior, and the American people would know how her plan would be implemented and paid for.

“I’m the only candidate standing here tonight who has said I will not raise taxes on the middle class,” she said. “I want to raise incomes, not taxes, and I’m going to do everything I can to make sure that the wealthy pay for debt free tuition, for child care, for paid family leave.”

And Clinton made an all-purpose case for her leadership and her ability win the White House, saying, “We need a president who can do all aspects of the job.”

The fighting wasn’t just over politics, but over policy, too, as Clinton and Sanders exchanged barbs over gun control and their competing health care plans — two issues that have emerged as central to the race in recent days.

Clinton charged Sanders with reversing his position on a 2005 bill that granted gun manufacturers immunity from lawsuits. She listed a series of provisions that she said the senator, who represents rural communities in Vermont, had supported in line with the NRA.

Sanders swiftly responded, saying that Clinton was being “very disingenuous” and pointed to his lifetime rating of “D-minus” from the National Rifle Association.

O’Malley chimed in and said he had actually pushed through gun control measures in Maryland. “I’ve never met a self-respecting hunter that needed an AR-15 to down a deer,” he said.

On health care, Clinton criticized Sanders’ single-payer plan — released just hours before the debate — as a risk to Obama’s signature health care law. She suggested that Sanders was winging it, too: “When we’re talking about health care, the details really matter.”

Sanders said his universal health care had been the cause of two Democratic Party forefathers: President Franklin Delano Roosevelt and Harry S. Truman. He implied that Clinton wouldn’t go far enough to ensure that everyone had access to health care, saying the debate was about “whether we have the guts to stand up to the private insurance companies and all of their money.”

GETTING CLOSE TO OBAMA

Throughout the debate, Clinton embraced Obama’s legacy, making the calculation that the president’s popularity could help her with primary voters. For Clinton, embracing Obama is one way for her to try and drive a wedge between Sanders and Democratic voters.

She repeatedly defended the Affordable Care Act and said Sanders’ approach would reopen a debate that might come back to haunt Democrats. “I do not want to see the Republicans repeal it, and I don’t want to see us start over again with a contentious debate,” she said.

Clinton’s case for tougher gun control also aimed to put her on the same side as Obama, who recently signed executive orders aimed at addressing a spate of shootings, including a deadly rampage last summer at a Charleston church, a few blocks from the debate hall.