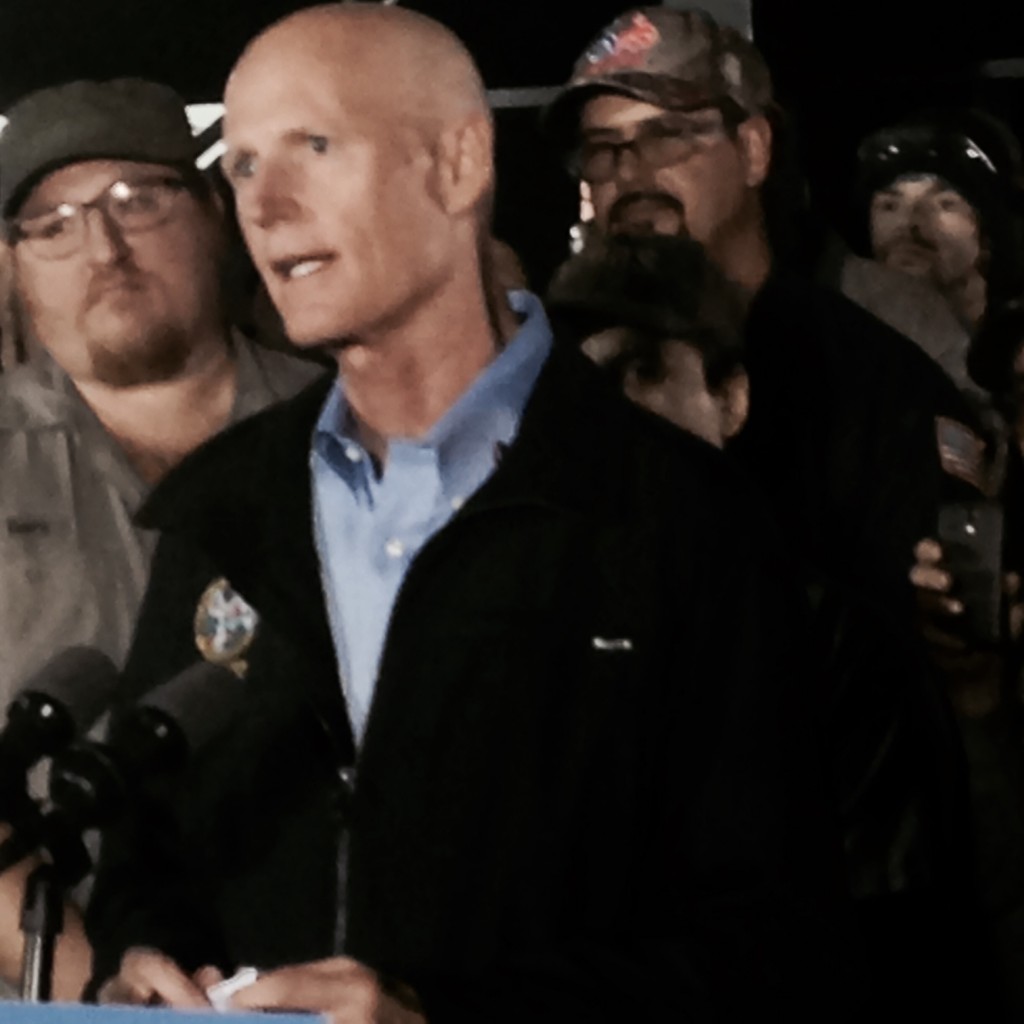 On Wednesday, Governor Rick Scott delivered remarks at the Heritage Foundation, then participated in a discussion with Jim Geraghty of National Review.

The subject: Florida’s economic growth and job creation numbers, of interest to the free-marketeers at Heritage and National Review, especially in light of mounting speculation as to what Scott’s next political move might be.

Scott told familiar stories about his background, and about the economic conditions under “the prior governor,” which he says were remedied by tax cuts and the paring of regulations relative to business.

Serving up red meat, he talked about jobs moving from Democratic states to Florida.

“I love all these governors. I joke that I send them thank yous,” Scott said, to a ripple of laughter.

Scott used his line about “beating Texas in job creation,” complete with the Rick Perry piece and the “he does remind me he’s no longer the governor.”

Some newer material: his focus on ports, and his reduction of manufacturing taxes, all of which “makes it easier to fund your government.”

The billion dollar tax cut raised a question from Geraghty.

This year, Scott wants to dump it for manufacturers and retailers, and then expand the tax elimination to other sectors.

Scott enthused about the state as “the best melting pot in the world,” with 250 languages spoken in the state. Migration, he said, has been concomitant with increased wages and prosperity.

“People are coming. The money is flowing to Florida,” Scott said.

Citing Shad Khan, he said the Jaguars owner was also deep into downtown development, “taking resources they made somewhere else and bringing it to Florida.”

On the question of “legal immigration,” Scott said that the Obama approach has been “polarizing.”

On Syrian refugees, the country needs “someone who can figure this out.”

Asked to endorse for President, Scott did not pull the Trump trigger, instead pulling out the “we’ve got a lot of great candidates” line.

“It’s all going to be about who’s got a real plan for jobs… someone’s going to figure out a plan to get their message out about job creation,” Scott said.

Scott then served red meat about the federal government: “why do they think they know better than we do? They think one size fits all,” Scott said, citing the differences between the states, and the ultimate competition for jobs and resources.

Scott pivoted the discussion to the Villages; Geraghty referred to it as “God’s waiting room,” using an old joke, and Scott coughed out a quick “yep,” in what was probably the most spontaneous Scott moment in some time.

Soon enough, a question from Geraghty: was Florida’s boom a consequence of the nation’s boom in job creation?

“We’ve beaten the national numbers for 50 straight months,” Scott said, adding that “most of my problems are from the federal government.”

Ultimately, diversifying the economy is a key to the Scott strategy. Dredging projects, such as the one in Miami that is expected to generate 33,000 jobs, “play to our strengths.”

A near term goal: bringing corporate offices to Florida.

“I think it’s happening. But what I want to do is add all the others, and not lose hospitality and Ag and all that stuff.”

Asked about Obamacare, Scott’s answer was predictable: premiums are way up.

“You should be able to buy whatever insurance you want,” Scott said.

“What government has done is mess up the market. The market will work,” Scott said.

Governor Scott didn’t pack the house. However, he did deliver a familiar message in a credible way to a receptive audience. This is the kind of thing that national types will take note of in the election cycles of the near term future.

“I look at my job as trying to help people like me growing up,” Scott said, keeping “the dream alive.”

The final question: Cuban normalization, which has led to an influx of refugees.

“The Castro brothers are still there,” Scott said. “How many of you want to invest your dollars in Cuba right now?”

The Feds, meanwhile, are “sitting on the sidelines,” passing the burden onto non-profits.

DC has “created this problem and has not shown up to try to solve it,” Scott added.