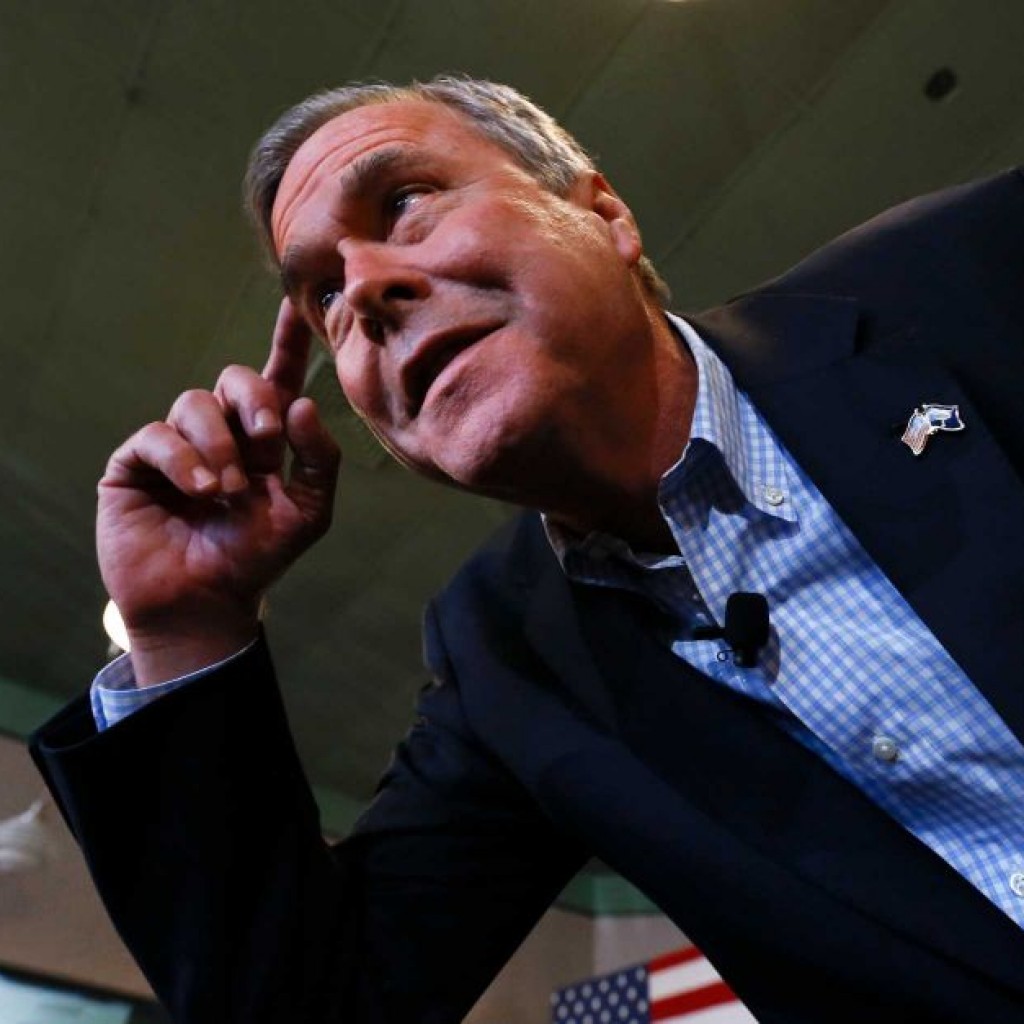 Jeb Bush has long kept his family at arm’s length in his effort to become commander-in-chief, but with the South Carolina primary looming, he’s embracing them like never before in the state that has historically stood by the Bush family in its previous White House bids.

It’s a drastic shift from the approach he took at the start of his campaign hinting at how precarious his fortunes have become.

Now, with his back to the wall, Bush is grabbing hold of the legacy, and hoping his front-row view of the world’s most difficult job means more to South Carolina’s military-minded Republican voters than a few awkward exchanges on the campaign trail ahead of Saturday’s critical primary.

In Beaufort, S.C., Wednesday, Bush told an audience he had experienced “watching history unfold, in a unique way,” a reference to his father’s and brother’s wartime administrations.

Bush’s best-known South Carolina advocate, the state’s senior Sen. Lindsey Graham, echoed that sentiment, stressing that Bush’s family is one of his biggest strengths and assets.

“He understands the job because his brother and his father have had that job,” Graham said.

Bush said in an Associated Press interview Thursday that his family legacy is actually what sets him apart from the others. “You get insight into things that are personal.”

For example, Bush recounted the days when he saw the “burden of leadership that my dad felt” in the weeks leading up to the 1991 Persian Gulf War.

“He didn’t talk specifically about what he was doing, or going to do,” Bush said. “You could just see the burden.”

Bush also lists dozens of admirals, generals and Medal of Honor recipients who have endorsed him. And he points to his time as governor in charge of Florida’s robust national guard, consultation with military and foreign policy experts and vigorous foreign travel while in office and as a private businessman as evidence.

But the family reference is a stark change from a year ago, when Bush, then weighing a potential run, said of his father George H.W. Bush and older brother George W. Bush during a Chicago speech: “I admire their service to the nation and the different decisions they had to make. But I am my own man and my views are shaped by my own thinking and own experiences.”

Bush’s frequent family references this week reflect the name’s popularity in South Carolina, where both the former wartime presidents won the first-in-the-South primary.

It also suggests how desperate Bush and his supporters are for signs of momentum, despite having built the 2016 race’s largest combined warchest of more than $150 million. And yet he finished sixth in Iowa’s leadoff caucuses on Feb. 1 and fourth in the New Hampshire primary on Feb. 8.

Despite his efforts in South Carolina, where his family name still maintains some political clout, Bush’s attempt to gain traction hit a rough patch this week.

The week started on a high note — a joyous reception from audiences as he campaigned with his former president brother, who came out of public political isolation to assist his younger brother’s at a critical juncture in his campaign.

But the following day, Bush was ridiculed for posting a picture on Twitter of a handgun, inscribed with his name and given to him by a manufacturer in Columbia he visited.

On an outdoor campaign stop in Summerville Wednesday, Bush fielded more advice on how to improve his underperforming campaign than questions about policy. That was the same day Rubio won the prized endorsement of South Carolina Gov. Nikki Haley, even after she met with George W. Bush in Columbia.

Even little things wrinkled Bush’s efforts this week. In Summerville, his clip-on microphone didn’t work. And in Myrtle Beach, Bush, who has recently abandoned glasses for contact lenses, complained to staff about the lighting as he left the hall rubbing his eyes.

Bush was hoping his fortunes would reverse on Friday when he was scheduled to campaign with his 90-year-old mother Barbara Bush, a beloved figure among a segment of South Carolina Republicans.

Barry Wynn, a member of Bush’s national finance team and former South Carolina Republican Party chairman, says he is convinced Bush can benefit from the family’s popularity, but he also acknowledges the pressure Bush faces.

Wynn and other Bush supporters have said he needs to beat or finish very close to Sens. Ted Cruz of Texas and Marco Rubio of Florida to justify asking donors to help him finance the next round of campaigning, which includes the Nevada caucuses and, more importantly, the Mar. 1 Super Tuesday primaries. All three trailed billionaire Donald Trump in a scrum according to most public polls of primary voters.

“We’ve got to make sure that when they cut off the tail here, we’re not the tail,” Wynn said. “And then we have to have the resources to stay in the game.”

MaryBeth Lewis of Florence put it more directly to Bush after a stop Thursday at the farmer’s market in her town. “Go get ’em!” she told Bush as she squeezed his hand.