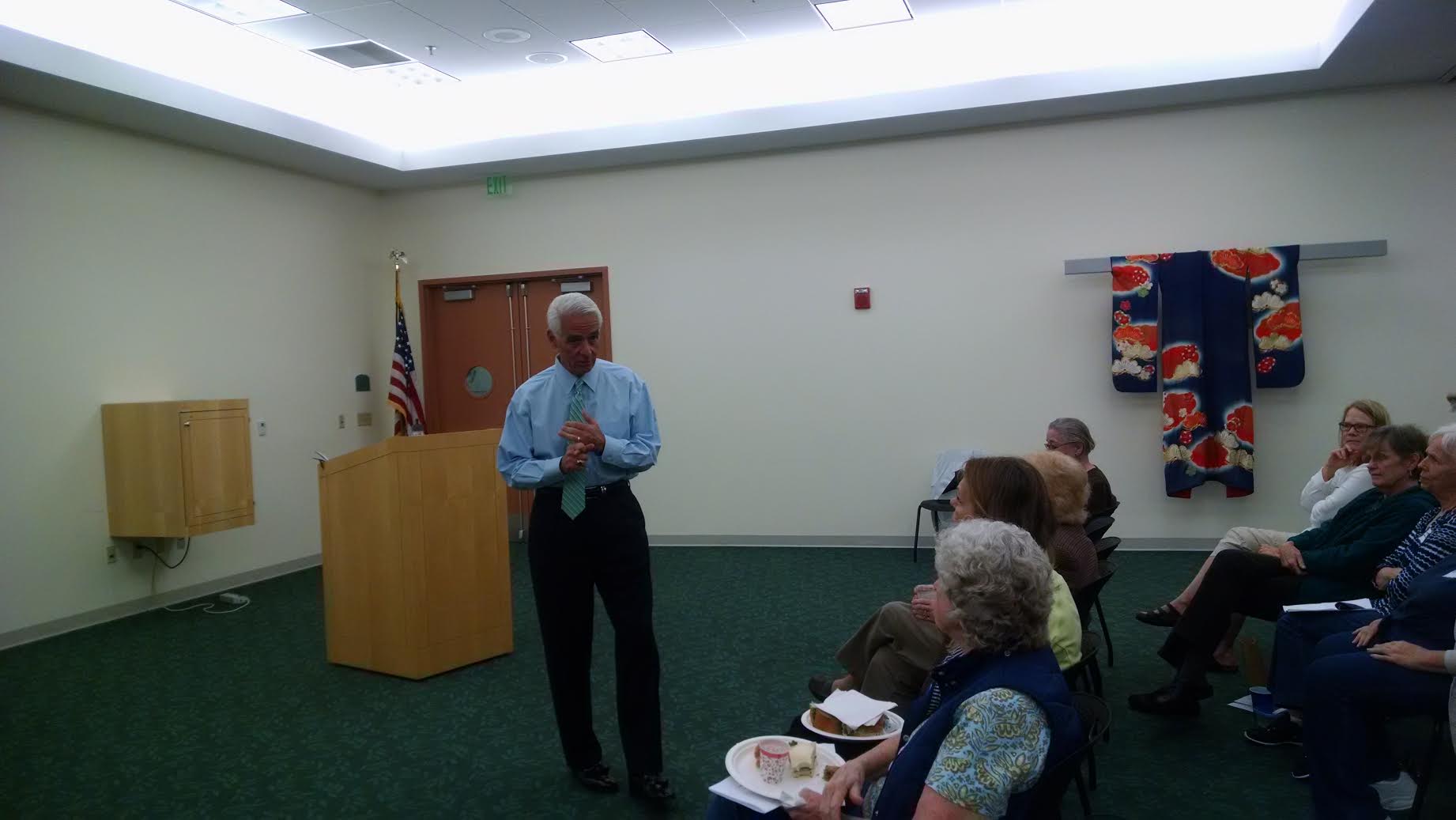 Pinellas County Democratic Congressional hopeful Eric Lynn had some news he couldn’t wait to announce before a group of Democrats at the Clearwater Main Library on Monday morning.

“Because of my lifelong work on women’s rights, equality, I’ve talked to many in this room about the ERA — how we need the Equal Rights Amendment to make sure that women’s pay is equal. Because of my work and my life on these important issues, I’m so proud and humbled to tell you that last week I was endorsed by the National Organization for Women.”

The crowd of about 50 people, nearly all members of the Democratic Women’s Club of Upper Pinellas, applauded heartily.

That included Charlie Crist, who is running against Lynn in the CD 13 Democratic contest.

Both men spoke briefly to the group, nearly six months before the men will face off in the primary contest. With the district now much more pro-Democratic leaning in its registration rolls, the winner is predicted to defeat the Republican candidate in November (Mark Bircher is the only Republican in the race at this time).

For a candidate like Lynn attempting to beat a heavyweight like Crist, the NOW PAC endorsement is meaningful.

“NOW PAC is proud to endorse Eric Lynn for Florida’s 13th District because he is the best candidate to fight for women’s equal pay, economic security and reproductive freedom in Congress,” said NOW PAC Chairwoman Terry O’Neill in a statement. “We need a leader like Lynn, who will stand firm in his commitment to protecting the rights of women and families.”

In his remarks, Lynn reminded the audience that he was among the first 40 people hired to work on Barack Obama’s campaign in 2007 when the then little-known U.S. senator from Illinois was going to similar small gatherings in Iowa, New Hampshire and other parts of the country.

Lynn worked in the Defense Department for six years under Obama. He told the crowd that while at the Pentagon he was proud to work on ending the “Don’t Ask, Don’t Tell,” policy, “because we needed equality for all of our soldiers and sailors.”

He ended his remarks by quoting John F. Kennedy talking about how hard it would be to begin the quest of getting a man on the moon.

“Elections are hard work. Changing the policies of this country is hard work. Getting women equality and keeping the women’s right to choose based on all of the things that we’ve seen on the Republican side of the aisle and potentially in the Supreme Court is hard work, but with your help, I know that we’ll be able to get to the moon just as we did with President Kennedy.”

Former Governor Crist then spoke for five minutes. He thanked the crowd for supporting him in his unsuccessful bid to return to the governor’s mansion in 2014, boasting that he did win in Pinellas.

“Pinellas is a progressive county. That’s why the issues that are so important to you are important to me. Equality for women, fundamental fairness for all. Civility in campaigns,” he said, before pivoting from that to discuss the GOP presidential race.

“My mom and my dad raised me to be respectful toward others, and what we’re seeing on the other side of the aisle today is an abomination. It’s absolutely unbelievable, like a race to the bottom. It’s unreal. All they’re doing is helping our nominee.”

Crist went on to talk about some of the things he did as governor, such as vetoing an ultrasound abortion bill, fighting for the restoration of rights for ex-felons, and signing an executive order extending early voting hours during the 2008 election, against the wishes of his own Republican party at the time.

While Crist has an enormous advantage regarding name recognition going into the late August contest, Lynn has been working crowds for months like the one he spoke to Monday. It’s paid off in getting other endorsements, including from Mary Lou Ambrose, the Largo Mid-Pinellas Democratic Club president and member of the Democratic Women’s Club of Upper Pinellas.

Full disclosure: This reporter was invited and spoke to the Democratic Women’s Club of Upper Pinellas as well Monday. That’s how I ended up reporting on the two candidates speeches. I had no idea they were going to be there until I saw Governor Crist as I was wandering through the library looking for the men’s room.