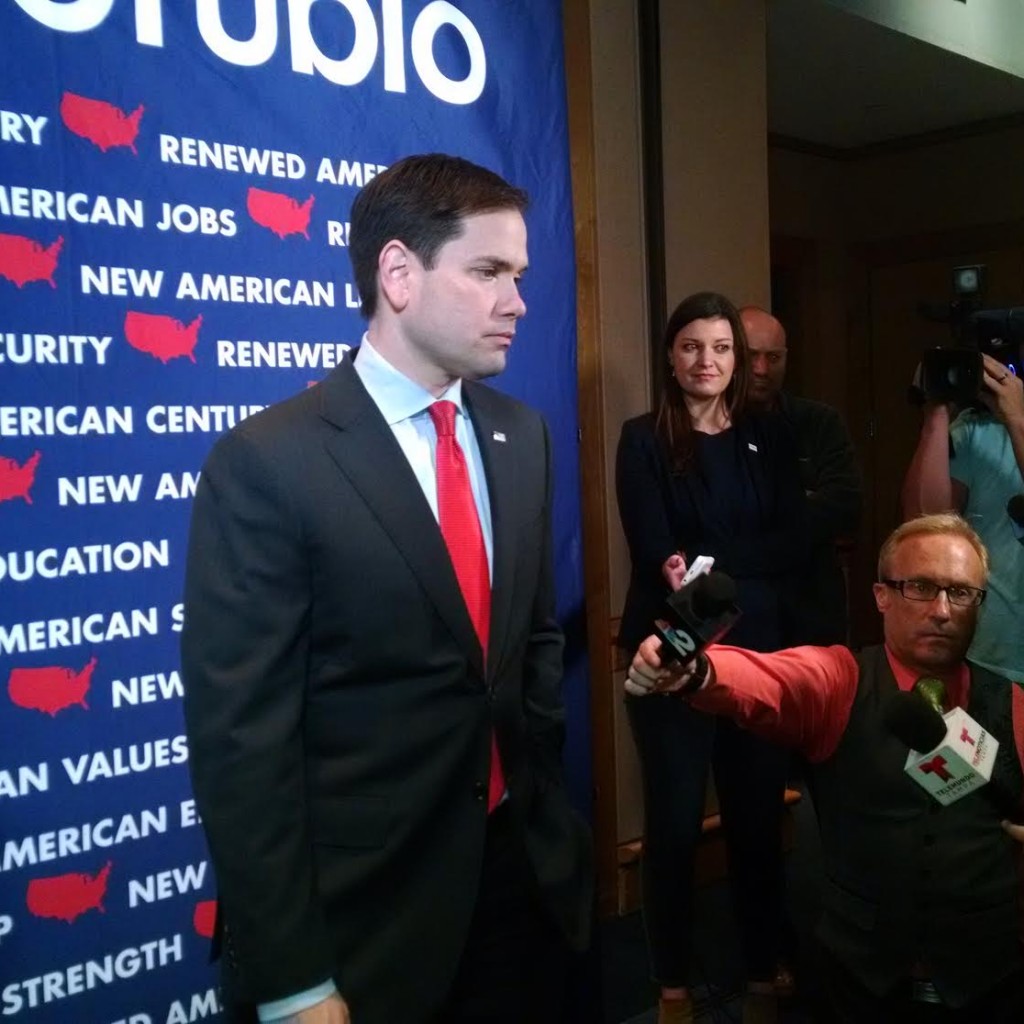 As he wound up his half-hour speech at the Tampa Convention Center Monday afternoon, Marco Rubio told the crowd of several hundred that they have an important decision to make when they vote next week.

For Rubio, Florida is everything in his increasingly remote chance of becoming the 2016 Republican presidential nominee. With just two victories (including one Sunday in Puerto Rico), the clock and delegate math are working against him.

The GOP establishment, personified by Mitt Romney, finally seemed last week to realize Donald Trump is gliding to the nomination, and fought back. “Donald suffered some real damage over the last week,” Rubio told reporters before his speech. “People are starting to learn that Donald Trump the character, and Donald Trump the person are not the same thing, and what you get as a president is not the character you see on television, it’s the person, as more and more people are learning about him, you start running into some real resistance.”

The problem for Rubio is that the disenchanted are going for Ted Cruz, not himself.

In the overall race for delegates, Trump has 378 and Cruz has 295. Rubio has 123 delegates and Ohio Gov. John Kasich has 34. It takes 1,237 delegates to win the Republican nomination for president.

“A vote for John Kasich or a vote for Ted Cruz in Florida is a vote for Donald Trump,” Rubio said. “I’m the only one who has any chance of beating Donald Trump in Florida. So if you don’t want Donald Trump to be the Republican nominee, you have to vote for Marco Rubio.”

With Trump threatening to run away with the race, Rubio went into attack mode two weeks ago against Trump, mocking him for having a “spray tan” and remarking on how small his hands are. Some political analysts called it not a good move for the senator, that it damaged his brand as a positive, optimistic candidate.

Rubio said he made those attacks only on the campaign trail, but that he had to do it.

“Donald Trump is a bully, and bullies need to be stood up to,” he said. “That’s not going to be my campaign, and it hasn’t been. That happened for one or two days. He had been offending everyone from the disabled, to minorities to women for the better part of 12 months, and, at least where I come from, when someone goes around doing that to people, eventually someone has to stand up to them, no matter what the consequences might be.”

“That was not Marco, so hopefully he’ll resonate more with policy and issues,” said Temple Terrace resident Marinel O’Dowd.

“I think a lot of that was necessary, immediately outside of that debate,” said Tampa Bay area GOP political consultant Brock Mikosky, who volunteers on Rubio’s team in Hillsborough County. “But there’s always a point at which there are diminishing returns …”

Several members of the audience noted Rubio’s dire straits in the election, but recalled  his underdog status to Charlie Crist in the U.S. Senate race in 2010.

Others thought he’s been getting fair media coverage.

“I think what’s happening is the media is driving the election,” said Port Richey part-time resident Pete Ciavarri, a New York voter. “They give Donald Trump 90 percent of the coverage. If they did with that with Marco Rubio, or any of the other candidates for that matter, people would have a better choice.”

“He was the candidate I was hoping would get the nomination, (but) he lost a lot of momentum,” Pasco County resident Mary Surnicki said. She said she attended Trump’s Orlando rally on Saturday and noted how “this is a little bit mellower and calmer,” but expressed surprise there weren’t more people.

When asked about it, Rubio brushed it off.

“If crowd size was indicative of his support, he’d be blowing everybody away everywhere,” Rubio told reporters. “He’s now starting to lose states as you’ve seen. I wouldn’t judge campaigns by crowd sizes.”

That’s probably true, since Bernie Sanders has been attracting huge crowds on the Democratic side, yet trails Hillary Clinton in the delegate count.

Unless Rubio puts more wins on the board and unless he wins Florida it won’t matter at all.