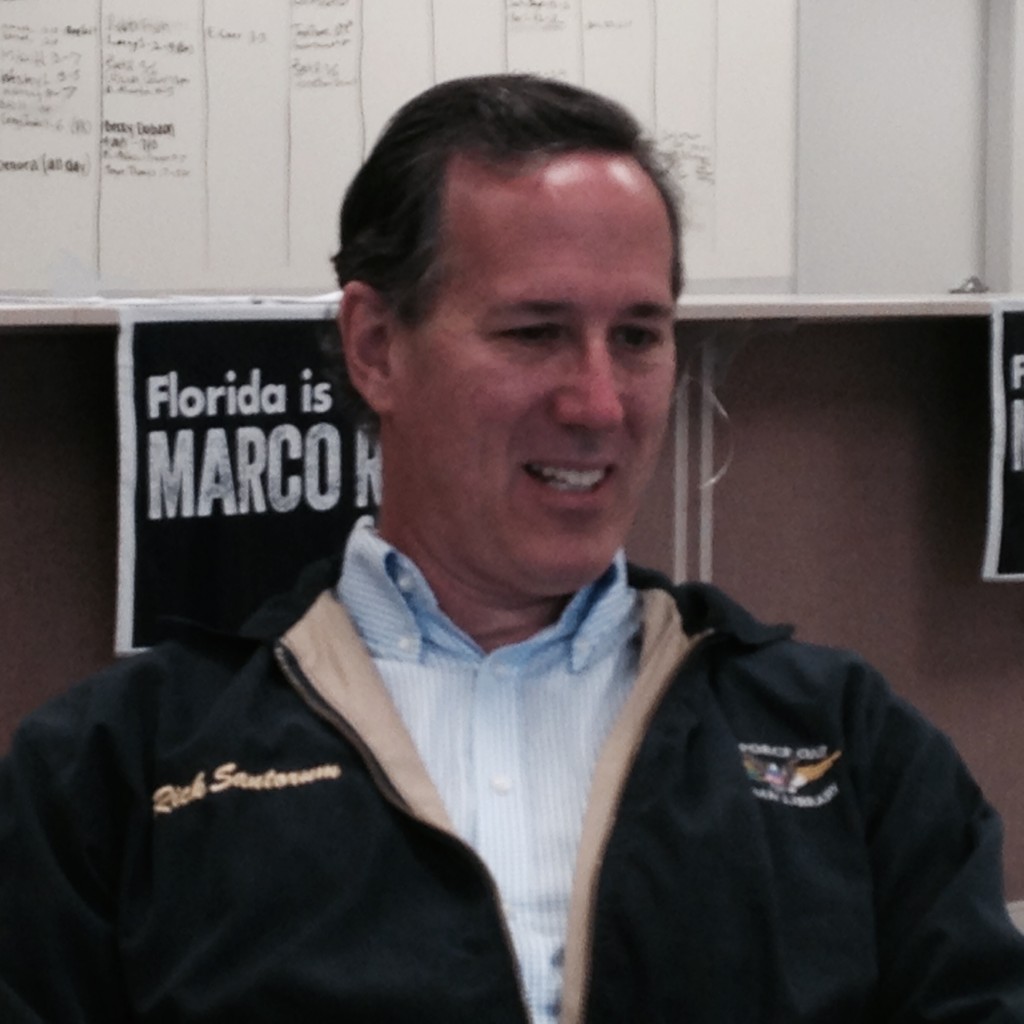 In a Thursday morning press conference in Marco Rubio’s Jacksonville campaign HQ, former Senator Rick Santorum made the case for the current Florida Senator, tailored to the “strong conservative area” of Northeast Florida.

“We have to make sure we have the strongest military in the world, because if we don’t lead, who will? Marco Rubio is prepared to do that.”

“One of the primary reasons I endorsed Marco is national security,” Santorum said, citing his own work in the Senate, which included 8 years on the Armed Services Committee, highlighted by strong support for the Syrian Accountability Act.

Santorum noted that the media characterizes him as a “pro-life guy,” yet he’s also a “National Security guy.” The former Pennsylvania Senator and Presidential candidate noted his own tenure at the Ethics and Public Policy tenure after he “left office” in 2006, which included lecturing about radical Islam.

“I’m concerned about the spread of radical Islam,” Santorum said, and he senses similar concern from Rubio, the only “Reagan conservative” in the race.

Rubio, beyond being concerned with thwarting “fundamentalist Islam,” also sees thwarting Venezuelan and Cuban “attempts to spread Marxism” as important, as well as the “growing threats of China.”

To that end, Santorum was liberal in criticizing the Bush/Obama era: “the last two administrations have done a poor job.

Cruz “talks tough,” Santorum said. But his “plans for dealing with ISIS are not strong… half measures.”

And Trump? “You don’t really know,” Santorum said, given his penchant for “flexibility.”

“Depending on what day it is, he changes his mind,” Santorum said of the “erratic and unpredictable” Trump.

“Commander in Chief is not an entry level position.”

John Kasich, meanwhile, has a “Cold War” mindset that is “disconnected from current threats,” Santorum says, not one that encompasses the post 9/11 Republican Nat Sec vision.

In contrast to these three, Rubio has an “understanding of the proper role of the United States,” one consistent with the Project for a New American Century aims of maintain a global presence to protect America’s economic and National Security positions.

Rubio, Santorum said, would push for “better utilization of dollars we have,” and reforms within the Pentagon.

“The key to success,” Santorum said of the United States military in dealing with the asymmetrical threats posed by ISIS and Al Qaeda before it, “is dominance in the sky… air superiority… drones and gunships” to “command the skies” and use that advantage to reinforce ground ops.

The current opposition, Santorum said, is “worse than Vietnam” with “no uniform opposition,” with ally and foe essentially “look[ing] the same.”

America must “control space” and “control the seas,” especially areas in “close proximity to the gulf states” and the “South China Sea” where “China is controlling the shipping lanes.”

“If we don’t have the ships… we’re going to be in a much more serious [situation],” Santorum added.

Hillary Clinton famously has asked, regarding China, “How do you get tough with your banker?”

Santorum believes that paradigm has shifted.

“China’s economy is much more dependent on us than we are on them,” Santorum said, citing the trade deficit and the Chinese liquidation of US currency reserves.

“China’s not in the greatest shape,” Santorum added.

Another question: if Rubio’s Nat Sec credentials are head and shoulders over the competition, why isn’t it registering in polls?

“The race seven or eight months ago changed,” mused Santorum, citing the Paris Attacks as a galvanizing moment for consciousness of the global struggle among GOP Primary voters.

That moment was short lived, however.

“As soon as there is a lull, people forget… it’s hard to keep on people’s mind,” Santorum observed.

Then, clearly alluding to Trump: “Just because someone talks tough doesn’t mean that they are.”

Santorum sees Florida as do or die for Republicans interested in stopping the frontrunner: “If Florida does not vote for Rubio, Trump will be the nominee on the first ballot,” Santorum said.

Santorum cited Rubio’s 98 percent rating with the American Conservative Union as a measure of his true conservatism, even as he conceded that people’s major qualm with Rubio is related to his Gang of 8 play on immigration.

He cautioned that should not be a dealbreaker for conservatives.

“People have to realize that one issue or think you don’t like doesn’t make a career. There are 364 other days to the year,” Santorum said, and “a lot of Rubio’s other work has been exemplary.”

Resources have been poured into strengthening Rubio in Northeast Florida. Robocalls and TV spots from Mayor Lenny Curry in Jacksonville, and now the two-day Santorum swing through the region.

Tuesday will be the tell of how much impact that has had.