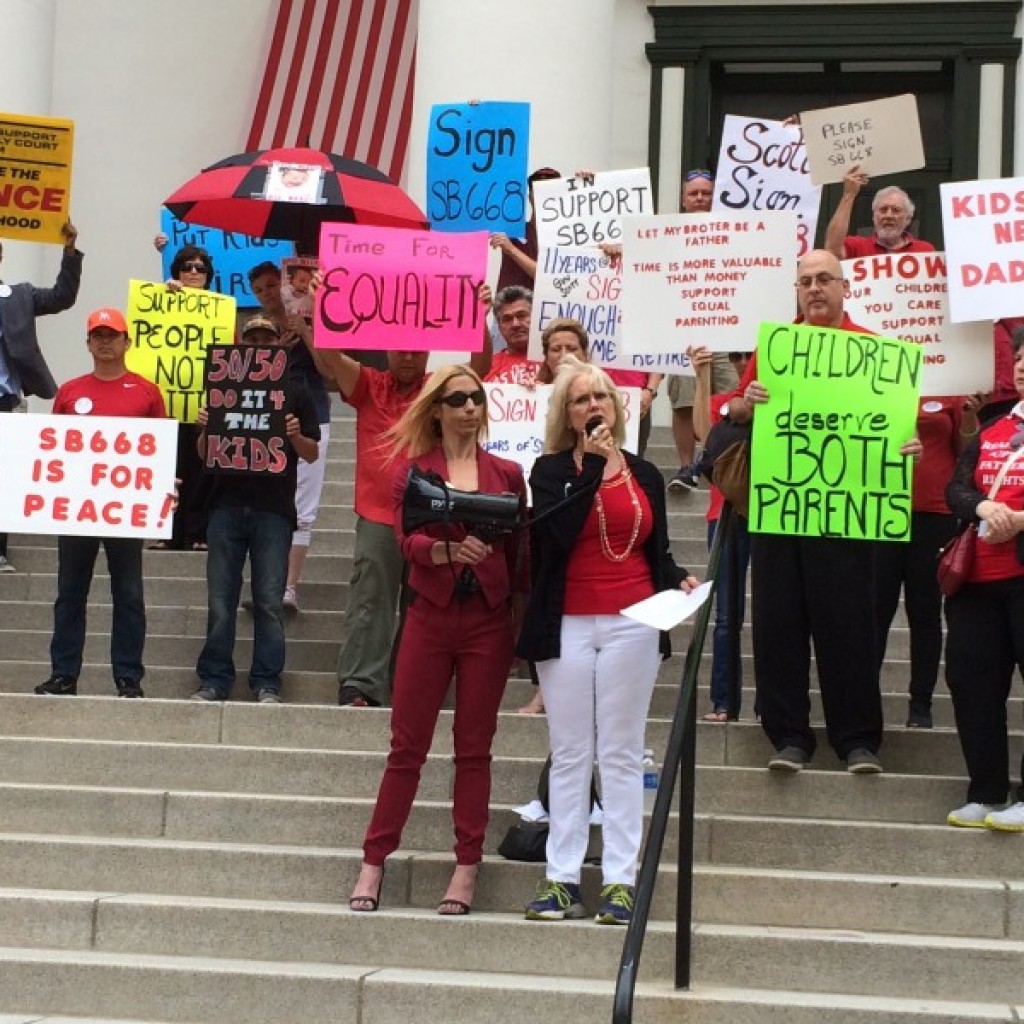 As more than 100 of them crammed the waiting room and hallway of Gov. Rick Scott‘s office on Tuesday, advocates and opponents of this year’s alimony overhaul bill had a hollering battle over the contentious legislation.

The opponents, led by Florida National Organization for Women lobbyist Barbara DeVane, scheduled a meeting with Scott’s staff at 11 a.m. to register their condemnation of the bill (SB 668).

The governor has until next Tuesday (April 19) to act on the measure, the final one sent to him by the Legislature out of the 2016 Legislative Session. The bill passed the Senate 24-14 and the House 74-38.

Scott was not in the Capitol, however; he was in central Florida Tuesday morning for a jobs announcement, according to his daily schedule.

Nonetheless, alimony reform activists also were waiting, having held their own rally of about 40 people on the old Capitol steps earlier that morning. Some of their signs said “No lifetime alimony” and “Support equal parenting.”

The bill does two main things: It changes the way Florida judges can award alimony with the intent to eliminate what critics have called “forever alimony” and creates a starting point for judges deciding custody that children should spend equal time with each parent.

Scott vetoed another attempt to modify alimony law in 2013 because it “tamper(ed) with the settled economic expectations of many Floridians who have experienced divorce.”

As Scott’s staff kept everyone waiting for nearly an hour in what became a stiflingly hot reception area, the war of words got similarly heated, with two Capitol Police officers standing by to keep the peace.

“Can we get equal rights?” asked Army veteran David Henry of Melbourne, who later said he was fighting a custody battle with his ex over their 5-year-old daughter. He held a yellow T-shirt that said, “Fathers Stand Up.” “Any comment on the abuse of the system currently?”

“We did not interrupt you so we would appreciate it if you would be silent,” DeVane shot back. They weren’t.

Lawyers “encourage these women to take advantage of the system,” another woman soon said. “Not all of us!” still another said.

One man yelled at opponents of the bill to “feel free to get one” of the “one million great jobs” that Scott says were created in the state during his time in office. “Tell him you need a better job!”

A woman holding a toddler soon asked him to “hold it down” and she was immediately seized on for being an “irresponsible” parent.

Earlier at the pro-bill rally, Carl Messina, a deli meat distributor in Daytona Beach, said his ex-wife was still getting $10,000 a month in permanent alimony from him more than 10 years after their divorce. He said he can’t retire because he’ll still have to work just to afford the monthly payments.

“What, do I have to go to court and beg?” Messina said. “I tried that,” despite his ex-wife now operating a bed and breakfast in New Smyrna Beach. “Listen, anybody I ever told my story to says, ‘that’s not fair.’ “

But Tami Messina, his ex-wife, disputes his side of the story. “He has no idea how my business is doing; in fact, it’s still operating at a loss,” she said in a phone interview.

She also said she “built that business with him, which is why I asked for half” of it. He refused, “so that’s why I am at least getting the alimony … I mean, he makes things up. Most men do, I guess.”

The bill before Scott allows courts to reduce alimony payments if there is a “substantial change in circumstances.” That could mean the unemployment of the person paying, or the person being paid reaching the age to receive full Social Security benefits.

In the Governor’s Office, members of Scott’s staff members finally came out, spoke to both sides and took notes over the continued din of the waiting area.

“He could hear me,” DeVane later said of the staff member. “He got the message.”

But some opponents were bent out of shape when Family Law Reform’s Frisher appeared to be ushered inside for a private meeting.

Scott spokesman John Tupps said in an email that “members of the Governor’s leadership team met with leadership from both sides of the alimony debate” and “several members of our Citizen Services team also met with dozens of concerned citizens both in opposition to and support of the bill.”

“We appreciate their opinions and we think it is important for Floridians to be able to have their voices heard,” Tupps added, saying the office has received 10,000 calls or emails in support of the bill and nearly 3,000 opposed. “The Governor will continue to listen to Floridians that submit thoughts and views on this legislation.”