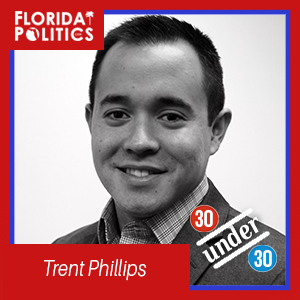 Trent Phillips cut his political teeth in the world of gambling, working for No Casinos, a group that advocates against the expansion of gambling in Florida.

Here’s Phillips in his own words.

I got into politics because … I’m competitive, and politics is a full contact sport. Whether it’s a campaign or policy debate, I want to achieve the best possible outcome for my side.

One principle I always put above politics is … other than loyalty? Trust. The process falls apart without it.

Person or people who gave me my first shot … the incredibly effective team behind No Casinos (John Sowinski, Tre’ Evers and Dana Loncar). Also, Robert Agrusa, who connected me with Chris Spencer and #TeamBrandes.

I’ve already worked for/on (campaign, issues, etc.) … I’ve volunteered on Governor Scott’s re-election campaign, worked for No Casinos, and as a Field Director on Jeff Brandes for State Senate. I’ve had the opportunity to work as a legislative aide to Senator Brandes for the past two years, doing everything I can to advance his legislative agenda and contribute to his success.

When I begin a project or first work on a campaign, I look for … what is your vision, who is your champion, what does success look like?

I’ve been blessed to have these people as my mentors … Dr. Jack Brennan, Senator Jeff Brandes, Commodore Chris Spencer, journalist Michael Joe Murphy, and my parents.

The people I most admire in politics are … those that are guided by their principles and have the integrity to stick to them.

One lesson I’ve already learned is … think big. The Legislature deals with complex challenges that can be overcome if we bring new ideas to the table and think outside the box.

If I wasn’t working in politics, I’d be … traveling the world with just a backpack, collecting passport stamps and working odd jobs to get by.

In 10 years, you’ll read about me … still involved in Florida politics, working with my fellow rising stars to make sure Florida is the greatest place in America to live, work and raise a family.