Thousands crowd into Ybor City to remember the Orlando victims 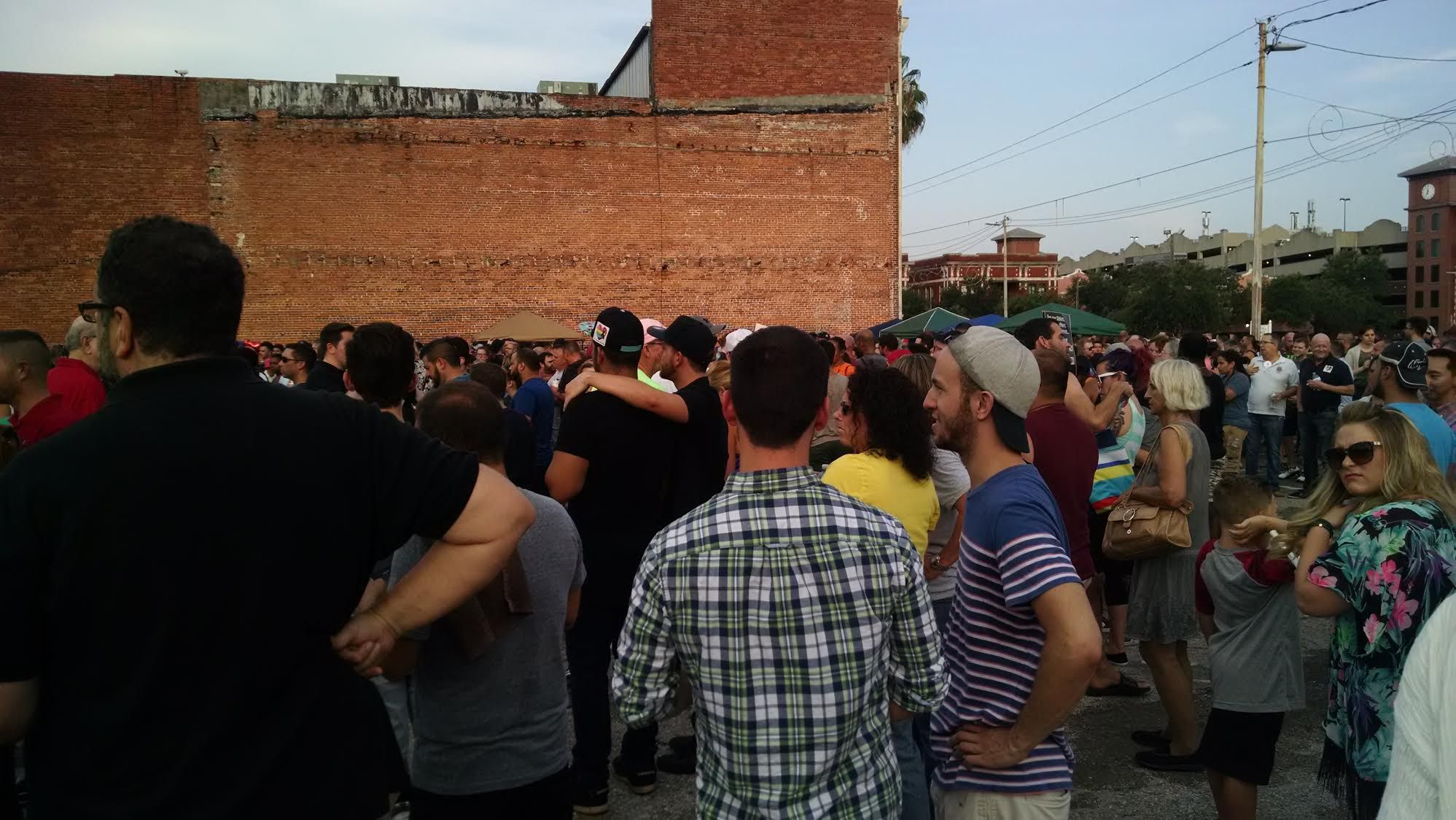 The dominant word at a vigil held in Ybor City on Monday night to honor the victims of the shooting massacre in Orlando was “love.”

A crowd of at least 2,000 people gathered for two hours in a parking lot on the north side of 7th Avenue between 14th and 15th streets to hear locally elected officials tell the crowd they were supporting them in this dark time, less than 48 hours after a gunman shot 49 people at the Pulse nightclub in Orlando.

“People are hurting, we know that,” said Tampa Mayor Bob Buckhorn, a bandage on his right arm indicating he gave blood earlier in the day. “We know that hearts are breaking all over this state. Those were our friends. Those were our brothers. Those were our spouses. Those were our lovers. They were our cousins; they were our moms and our dads and our kids. And even in the darkest moment, there’s light, because out of this tragedy will become a state when it’s all said and done. We will persevere this, we will survive this, we will move on. We will never forget those who lost their lives, and those families who were left behind who are suffering now, but ultimately we must go, and we must be survivors to the fact that we’re not going to tolerate hate in our country. “

“It’s important to keep in mind that ideology that spawned that hatred was not born in a foreign land. It was conceived and nurtured in the womb of hatred, bigotry and intolerance,” said Hillsborough County Commissioner Kevin Beckner, who spoke as County Administrator Mike Merrill and a handful of Hillsborough County sheriff deputies stood alongside him on the stage.

Beckner, the first openly gay elected public official in Hillsborough County history, got political, referencing how until a few years ago, Hillsborough County had a horrible reputation regarding LGBT rights. Specifically, he mentioned the infamous June 2005 vote to ban gay pride activities, and said it had “stained” the reputation of the community, and sent a clear message that “it’s OK to bully because of who you love. And it’s OK if other acts of community violence perpetrates our community.”

He noted, however, “we’ve come a long ways,” including instituting a comprehensive human rights ordinance that guarantees the rights for employment and equal housing for everyone in the county, including those in the LGBT community.

Beckner said this week he was going to ask his colleagues on the BOCC for two items at their meeting on Wednesday — that from June 15-30, the county raise the rainbow flag in solidarity with the victims in Orlando. And he will ask staff to draft a policy and resolution recognizing June as LGBT Pride month, which they have never done as a board.

Five of the seven members of the Tampa City Council also appeared at the event, and all of them except Frank Reddick addressed the audience.

Lisa Montelione seemed to touch a chord in the crowd when she mentioned the delay in announcing the names of the 49 people who were killed by bullets from the assailant Sunday morning. “As you and I well know, a lot of families haven’t been in touch with their loved ones. They are distanced. They are disavowed. But we are here today to stand strong, and stand proud, and stand with our families!”

And she said she stood in solidarity with those in the Arab world. “This was the act of a person full of hate. This was not a religious act,” which received a respectful amount of applause, though this reporter overheard one conversation between two people before the event questioning whether they were to echo that belief.

Guido Maniscalco said he wasn’t standing in front of a sea of people but a “sea of love.”

“I can’t find the words,” the young legislator began. He said he couldn’t believe the initial accounts from Orlando on Sunday. He said the victims would “live forever, in our hearts and on our tongues and in our community,” and he said he had already forgotten the individual who committed the horrific acts. “It’s not about hate or forgiveness, it’s about what’s right or wrong.”

“This is the first step into what is powerful and good about what we are in Tampa, Orlando, in Florida and this country. We stand together as one people,” said Councilman Mike Suarez. “Who loves each other. When tragedy hits, we don’t forget that. It doesn’t matter what our racial background is, heritage, or religion. This is what it means to be an American. This, all of you here gathered here today, loving one another, being here to support not only your brothers and sisters in Orlando, but all of us here in Tampa. We will not allow this city to find a place where hate is the watchword. Love is what we stand for.”

Clerk of the Courts Pat Frank has been a longtime advocate for the LGBT community, including fighting to overturn the ban on gay adoption in the state Legislature years ago. She said it was “remarkable” how much progress the county had made when it came to LGBT rights.

“While we condemn acts of evil, we must not stoop to the level of those committing evil acts,” Frank said. “We must stand tall for the values of democracy and equality for everyone. And we must do it through love, it’s the only way we can prevail in the face of hatred and bigotry.”