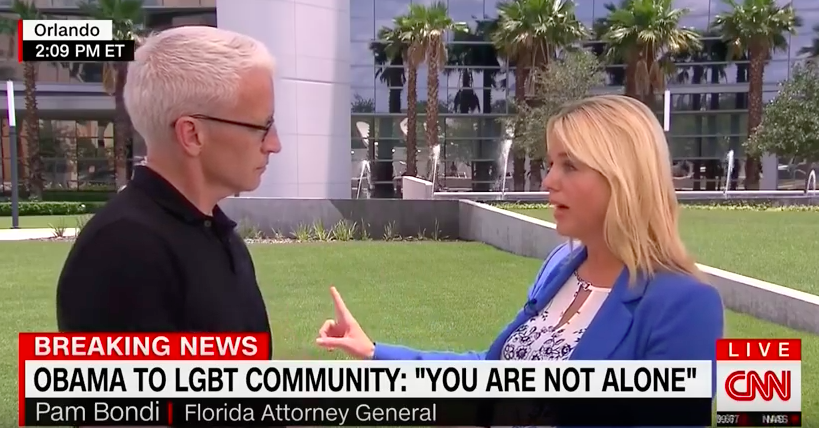 CNN’s Anderson Cooper called out Florida Attorney General Pam Bondi for her apparent double standard on sexuality in the wake of the Orlando shooting.

Bondi appeared live in a stand-up interview with Cooper in Orlando that became increasingly testy.

The CNN newsman came out as gay in 2012. Sunday’s shooting took place in a gay nightclub, and shooter Omar Mateen’s father has said his son was incensed by the sight of two men kissing during a recent visit to Miami.

“I talked to a lot of gay and lesbian people here who are not fans of yours,” Cooper said. “They said they thought you were being a hypocrite, that you for years have fought … have basically gone after gay people. You said in court that gay people, simply by fighting for marriage equality, were trying to do harm to the people of Florida.”

At this point in the interview, Bondi can be seen shaking her head. Earlier this week, she had said that anyone who does harm to the LGBTQ community will be “gone after” to the fullest extent of the law.

But many still resent her stance in defense of Florida’s ban on same-sex marriages. It and other state bans were struck down as unconstitutional by the U.S. Supreme Court last year.

“Do you really think you’re a champion of the gay community?” he asked Bondi.

“Let me tell you, when I was sworn in as attorney general, I put my hand on the Bible and was sworn to uphold the constitution of the state of Florida,” she said, noting the ban was passed by voters in 2008 as a constitutional amendment. “That’s what I was defending. Had nothing to do … I’ve never said I don’t like gay people, that’s ridiculous.”

Bondi went on, “Anderson, I don’t believe gay people could do harm to the state of Florida. We’re human beings.”

“But you argued that in court,” he said.

“My lawyer argued a case defending what the Supreme Court allowed the voters to put in our state constitution,” she said.

Cooper later asked, “Are you saying you did not believe it would do harm to Florida?”

“Of course not, of course not,” Bondi said. “Gay people … no, I’ve never said that. Those words have never come out of my mouth.”

Cooper was relentless, adding, “…Had there been no same-sex marriage, you do realize that spouses, there would be no spouses, that boyfriends and girlfriends of the dead would not be able to get information and would not be able probably even to visit in the hospital here. Isn’t there a sick irony in that?”

Still later, Bondi said, “You know what today is about? Human beings. Today’s about victims.”

“It is about gay and lesbian victims,” Cooper said.

“It sure is. LGBT victims,” she said, adding her office was also dealing with complaints of a local funeral home price-gouging a family of the dead.

“I will say I have never really seen you talk about gays and lesbians and transgender people in a positive way until now,” Cooper said. “I read your Twitter history for the last year, and I saw you tweeting about, you know, national dog month and national shelter dog appreciation day or adopt a shelter dog month.

“Well, actually if you look at my website now, we have hands clasped together, all different colored rainbow hands, people,” Bondi said. It wasn’t clear what website she was referring to; the official website of the Attorney’s General’s Office had no such graphic on Tuesday.

“My goodness, Anderson, we’ve had 49 people murdered simply because they were in a bar at the wrong time,” she said. “That’s horrible.”

Ana Navarro, a Republican strategist and CNN commentator, later tweeted: “Oof! @AGPamBondi & @andersoncooper are my friends. This was painful. Anderson had to raise it. Pam had to defend it.” 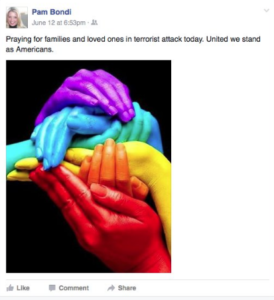 6 p.m. update: The “hands clasped together” image that Bondi spoke of was actually posted on her personal Facebook page on Sunday.