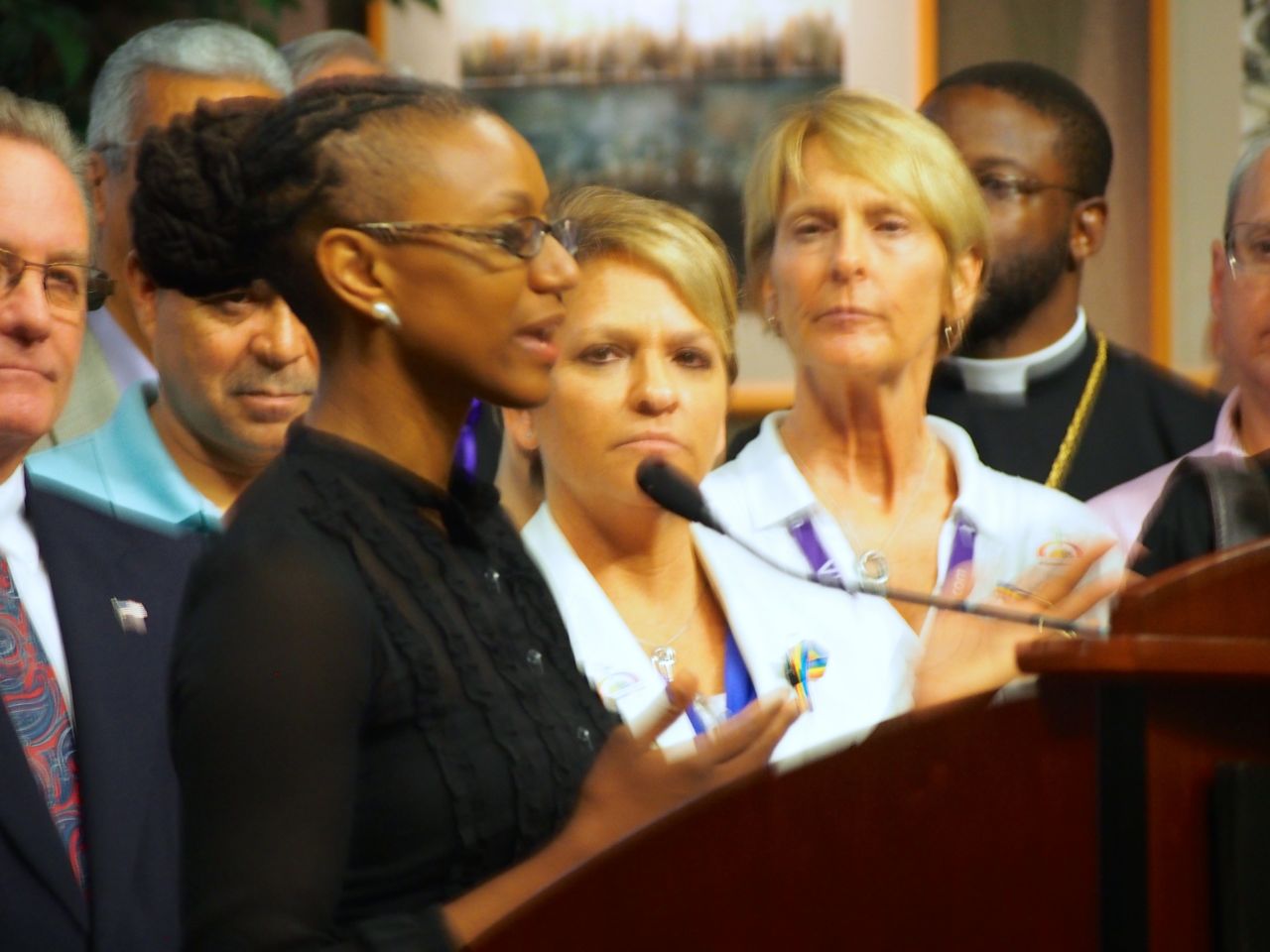 Orlando-area clergy, politicians, and leaders of the LGBT community came together Wednesday afternoon at the Orange County Administration Building to preach scripture, love and unity as the city prepares for its 49 Pulse funerals.

“I can’t think of the best word, but historic,” said Victoria Kirby York of the National LGBTQ Task Force, who came to Orlando from Washington D.C. to help. “Because of the churches present: there are a number of denominations present that haven’t historically been supportive of the LGBTQ community.”

But in Orlando they are. After Sunday’s massacre at Orlando’s popular LGBT nightclub Pulse, they came to profess their love and declare their support, and do so in the name of their faiths.

“That Gospel says I love my Muslim brothers, I love my LGBTQ community, I love every child of God,” said the Rev. Larry Mills of the Mt. Sinai Baptist Church.

They were there for two purposes.

Such professions were primary, and similar testimonials came from Imam Muhammad Musri of the Islam Society of Central Florida, Rabbi Yosef Konikov of Chabad Of South Orlando, the Rev. Jorge Torres of St. James Catholic Cathedral, the Rev. Terry Pierce of Joy Metropolitan Church and the Rev. David Uth of First Baptist Church, among others.

The other purpose was to prepare as a united front to counter any demonstrations that may come at the funerals, from members of the highly controversial Westboro Baptist Church of Kansas.

That church — which many of the clergy strongly condemned in their remarks — attempts to disrupt the funerals of people who are gay, or who the church declares must be gay, including American soldiers killed in action.

Jacobs and Orlando City Commissioner Patty Sheehan, who is gay and has attended funerals before that drew Westboro protesters, urged Orlando to deal with the Westboro visitors peacefully, and ignore any provocative tactics including foul insults of the dead. Sheehan said the church’s standard practice is to seek to provoke violence, and then sue.

Uth, of First Baptist, also has dealt with Westboro protesters and agreed. He urged Orlando to overpower the protesters with showings of love.

“We are churches united all across Orlando and Central Florida, standing here today deciding love wins,” Uth said. “Visitors are welcome here in Orlando but we do not welcome any message of hate.”

The Rev. Tom McCloskey of the First United Methodist Church of Orlando, suggested the clergy gathered Wednesday reunite at as many funerals as possible to show the united front of Orlando.

The idea was widely well received, and Jacobs said her office would try to coordinate, though their presence will have to be cleared with families.

Several of the clergy at Wednesday’s gathering already are arranging funerals, with the first several coming Saturday.