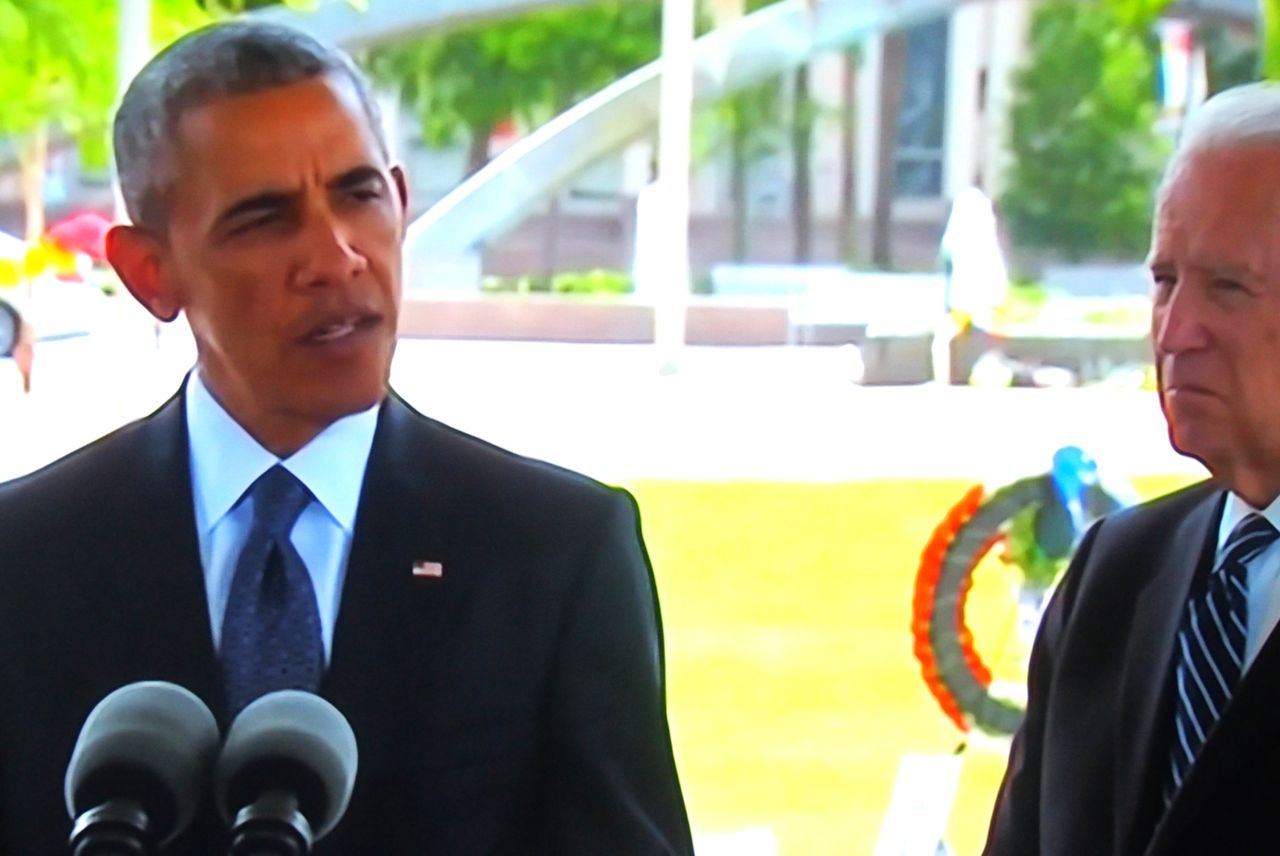 Pool report on the visit of President Barack Obama and Vice President Joe Biden to Orlando, to offer comfort and support to families, employees, first responders and others from the Pulse nightclub massacre, filed by Orlando Sentinel reporter Steven Lemongello:

President Barack Obama and Vice President Joe Biden were at Amway Center for two hours meeting with family members of victims and survivors, which was closed to media.

The White House said in a statement that afterward, they met with the owners and staff of Pulse nightclub, which lost two employees in the attack.

Shortly after 3:30 p.m., the presidential motorcade drove the few blocks to the Dr. Phillips Center for the Performing Arts, where a memorial to the victims had been created on the lawn.

The president and vice president walked to the front of the memorial and laid bouquets of 49 flowers, representing all those who died in the shooting.

The two then stood in silence for several moments, looking down at the dozens upon dozens of flowers, signs, and tributes that have been placed inside a rainbow paper chain.

As a brief rain started to fall, Obama and Biden walked to a podium located in front of the Center and Obama spoke to the assembled media.

“Four days ago, this community was shaken by an evil, hateful act,” Obama said. “Today we are reminded of what is good — passion, empathy, decency, and most of all, there is love. That is the Orlando we’ve seen in recent days and that is the America we have seen.

The families that he and Biden met, Obama said, had “grief beyond description.”

“Through their pain and through tears, they told us what joy their loved ones brought to their lives,” Obama said. “They talked about their sons and their daughters. So many young people in their 20s and 30s … One young woman who was just 18 years old. Another said her daughter was a happy girl with so many dreams.”

Obama also spoke about the mother who gave her life for her son, as well as the former Marine “whose quick thinking saved hundreds of lives.”

“Those families could be our families,” Obama said. ”In fact, they are our families. They’re part of the American family. On behalf of the American people, our hearts are broken too. We stand with you. We’re here for you. And we are remembering those you loved so deeply.”

Obama and Biden placed bouquets of 49 white roses at the memorial in front of Dr. Phillips Center, one for each of those lost in the attack.

In his remarks, Obama also praised the first responders, doctors and nurses who responded to the attack.

He then touched on the ways to prevent such tragedies in the future, saying that “if we want to show the best of humanity, we’re all going to have to work together, at every level of government, across political lines.”

He said the U.S. must continue to be “relentless” against ISIL and Al Qaeda networks and financing.

“We are going to destroy them,” he said.

But he pointed out that the last two terrorist attacks on the U.S., Orlando and San Bernardino, were “homegrown.”

“It’s going to take more than just our military, more than just our intelligence teams,” Obama said. “If you have lone wolf attacks like this, hatched in the minds of disturbed persons, we’re going to have to take different kinds of steps to prevent these kinds of things from happening.”

The attack was done by “a single killer with a powerful assault rifle,” Obama said, and while the motives may have been different than Newtown or Aurora, “the instruments of death are similar.”

“Unfortunately, politics have conspired to make it as easy as possible for a terrorist or just a disturbed individual” to buy assault weapons, he said, adding that he hopes senators and congressmen “rise to the moment.”

“Today, once again, as has been true so many times before, I held and hugged grieving family members and parents and asked, ‘Why does this keep happening?'”

“If we don’t act,” Obama said, “if we keep seeing more massacres like this, it’ll be because we chose to allow this. We’ll have said we don’t care enough to do something about it.”

Obama specifically spoke of the shootings as an attack on the LGBT community, calling Pulse a “sanctuary that was violated in the worst way imaginable.”
“This was an act of terrorism, but it was also an act of hate,” Obama said.”Here in Orlando, in the men and women taken from us, in those who loved them, we see some of the true character of this country, the best of humanity coming roaring back. The love, compassion, and fierce resolve that will carry us not only through this atrocity, but whatever difficult times [may come].”