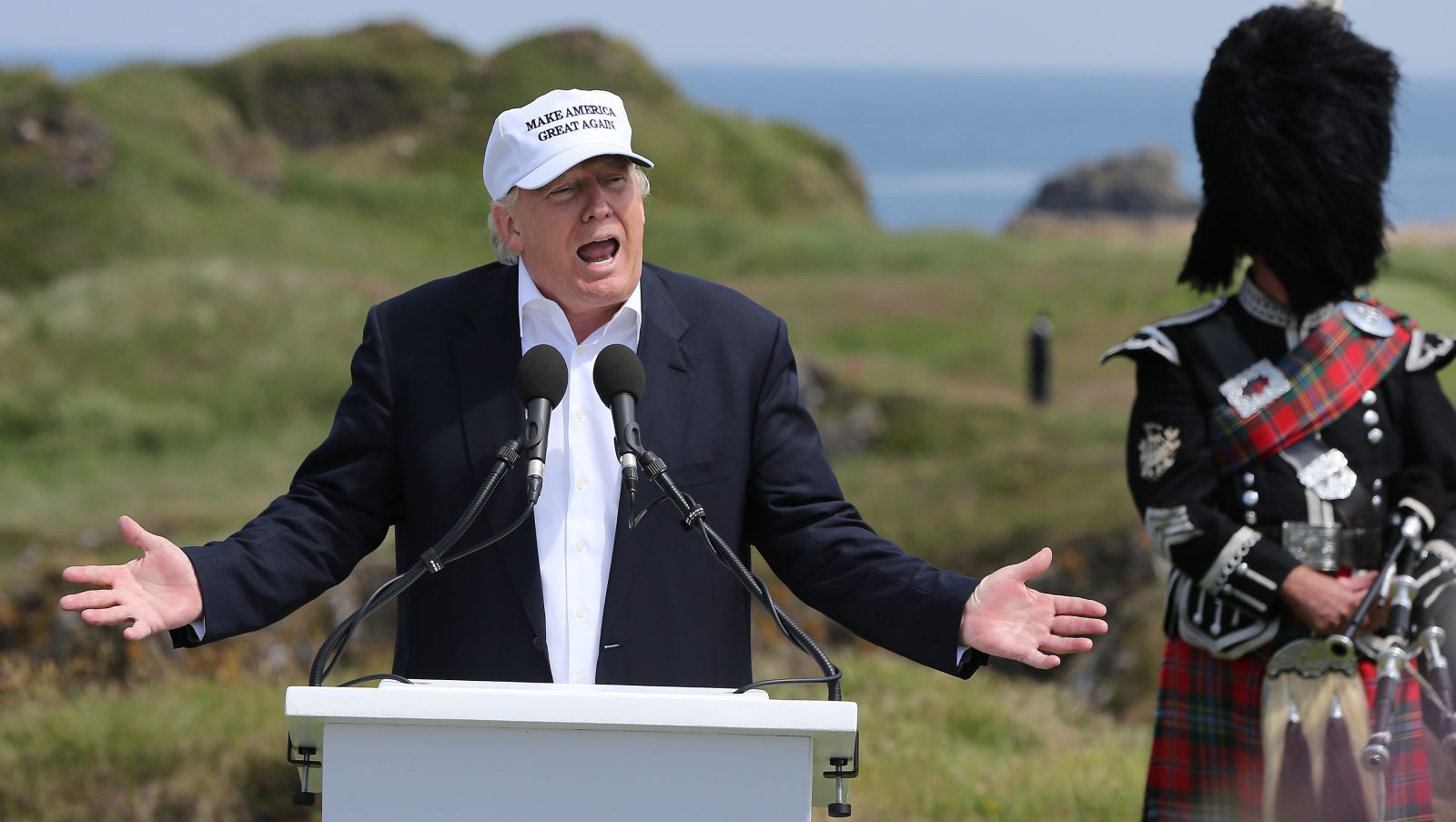 As he arrived at his golf course in Scotland, wearing a white “Make America Great Again” cap, Donald Trump’s cosmetically-enhanced grin was wide as the ocean, despite the guy handing out golf balls with swastikas on them, despite the protesters waving Mexican flags. The UK’s vote to leave the European Union was “fantastic,” he said. The British have “taken back their country,” no longer accepting all those immigrants “pouring over their borders.”

Watch for Trump will to try and make his own hay here, linking “Brexit” to anti-immigrant sentiment in the US. No doubt he takes it as a signal that he will prevail in November.

And check this out: Boris Johnson, the anti-EU Tory likely to become prime minister when David Cameron resigns in the fall, is something of a populist as well as a notorious philanderer with a shock of peculiar margarine-colored hair.

The UK, like the US, is sharply divided, as the “Brexit” vote reveals. The more educated, more urban, more ethnically diverse and more affluent wanted to stay in the EU; the less educated, more rural, and whiter population still struggling to recover from the 2008 recession and the Conservative government’s “austerity” program, were hell-bent on leaving.

Trump famously “loves the poorly educated” and they, evidently, love him back.

Here’s what’s really going on: white people no longer rule everything. And it’s driving them crazy.

In Britain, fifty years of immigration has created a vibrant multicultural nation. That influx of people from India, Pakistan, Bangladesh, Uganda, Nigeria, and the West Indies, people who practice medicine, run restaurants, teach school, hold political office, and participate in every other aspect of British life, has little to do with the EU. It’s the Empire striking back. For 200 years, people in these former colonies were told that England is the Mother Country, so it’s hardly surprising that some of them decided to go “home.”

EU citizens have also relocated to the UK, but more recently and in fewer numbers, yet somehow they bear the brunt of “Brexit’s” Anglo-Saxon rage. The UK Independence Party, a Trumpian collection of xenophobes and outright racists, were expert at convincing disaffected working-class voters that they were unemployed because of the EU, not an economy changing from manufacturing to services.

UKIP, along with hubristic Tory politicians and the Murdoch press (Sun headline on June 23rd: “Be-LEAVE in Britain”) also played on patriotism and the lurking sense that the EU is soft on terrorism.

Prime Minister David Cameron, who wanted to stay in the EU, did a crap job of arguing for the benefits the EU brings, instead trying to out-scare and out-outrage the anti-EU forces. Decades of hilariously-weird urban myths have flourished in British popular culture. EU regulators say bananas should not display “abnormal curvature.” The “Full English Breakfast,” a festival of fat beloved of all true John and Jane Bulls, should be replaced by “muesli and croissants.” Worst of all, the EU might force barmaids to stop wearing low-cut tops.

None of these dictates were actually true, but that didn’t stop the tabloid press from launching a “Save Our Jugs” campaign.

In terms of subtlety and truth, these canards are right up there with Barack Obama coming to take your guns, or Hillary Clinton wanting to let in hundreds of thousands of crazed jihadis who will impose sharia law and vote a straight Democrat ticket.

Pissed-off white people here in the US don’t have an EU to focus their anger upon, so they fixate on a variety of “Others”–Mexicans, African-Americans, liberals, gays, feminists, intellectuals, elites. Lately, it’s an emotional roller-coaster ride.  The same day the British went to the polls on EU membership, the Supreme Court slapped white folks upside the head by saying yes, affirmative action that takes into account the race of a university applicant is A-OK.

Then SCOTUS turned around and decided to not decide on Barack Obama’s immigration initiative, leaving a few million undocumenteds worrying that they could be deported at any time.

They won’t be: the president has made it clear that he’s more interested in deporting people who commit crimes instead of the mother of a couple of US citizens who crossed the border illegally.

But Republicans and Trumpsters will gin this up, telling their voters–strangely like Britain’s anti-EU voters–that the November election is their chance to make sure a right-winger gets on the Supreme Court to break the tie.

And Clinton supporters will get revved up to see that Hillary chooses the next Supreme  Court justice.

The UK is not, of course, exactly like the US. The EU referendum is not the same as our presidential election. But the nationalist, isolationist impulses that make Trump’s “America First” campaign or Brexiters’s “Britain First” campaign come from a similar place: frightened, angry, frustrated and mean-spirited.