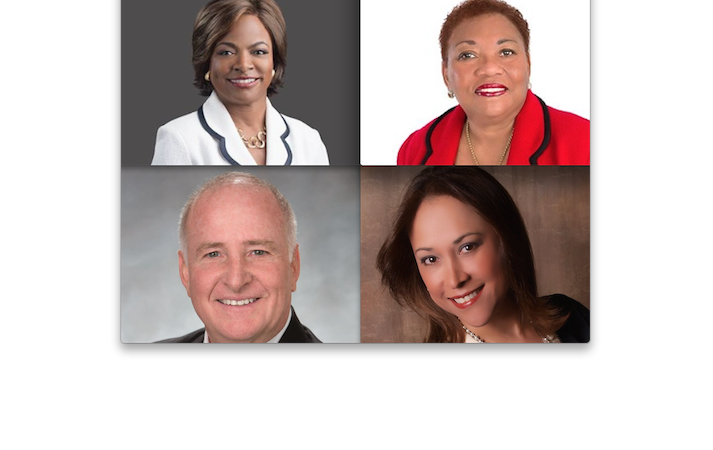 Two months away from the Aug. 30 Democratic primary, the four candidates vying to run in the Democratically solid Florida’s 10th Congressional District meet face-to-face for the first time Thursday at the Tiger Bay Club of Central Florida’s debate.

This was supposed to be former Orlando Police Chief Val Demings’ congressional seat. She was the last serious Democratic candidate to run in CD 10 and nearly pulled off a major upset in 2012. If she was ready for a second shot — this time with a redrawn and now favorable district — she deserved one.

Except that state Sen. Geraldine Thompson, who entered the race last fall, has been elected here five times, thinks of these voters as hers, the constituents she’s served for 10 years, and she’s the only candidate with a legislative record, one strong enough to get her elected chair of the Florida Legislative Black Caucus.

Or except that former Florida Democratic Party Chairman Bob Poe entered the race in January with the money and the connections to run a big campaign, and the belief that neither Demings nor Thompson represents well the progressive movement swelling in the Democratic Party.

Or except that lawyer Fatima Rita Fahmy entered the race in November with the pluck and guile (some would say gall) of a spoiler, and the determination that this year, of all years, no establishment candidate should feel entitled to anything.

This is an Orlando seat the Democrats expect they will almost surely flip from Republican control. Even the incumbent, U.S. Rep. Dan Webster agrees, which is why he switched to run in another district. Eventually Republican Thuy Lowe will have something to say about that, but Democrats aren’t worried.

They’re all likely to agree at least in principal on most Democratic issues. So here are some questions the Tiger Bay Club might ask:

Chief Demings: You’re proud of your record in law enforcement, culminating in your leadership as Orlando’s chief, but the department’s notoriously high level of excessive force appeared to peak during your reign, and the current chief has been left to clean it up. When you go into the district’s poor black and Hispanic neighborhoods, how can you tell people your loyalty’s always been with them, not with the men and women in blue?

Sen. Thompson: You’ve been a champion for the west side’s black population, but you’ve been accused of paying little attention to the white, Hispanic and Asian-American populations and the suburbs such as Windermere and Winter Garden. This congressional district is even broader. How do you plan to expand your reach?

Mr. Poe: This district was drawn with a majority of voters being racial and ethnic minorities and most people assumed it would be Orlando’s black-represented district, replacing Florida’s 5th Congressional District. How do you convince people you’re not just another white guy using your money to buy a congressional seat that was supposed to not be for white guys?

Ms. Fahmy: What have you ever done? That’s it. That’s the whole question.

Chief Demings: We know now you had health issues you did not disclose then. But when you unexpectedly withdrew from the 2014 Orange County mayor’s race, taking away the top-of-the-ticket draw, didn’t you hurt the chances of down-ticket Democrats who wound up losing close races?

Ms. Fahmy: You’ve had some struggles managing your law practice that have resulted in Florida Bar complaints. How to you make people confident you can help manage the federal government’s finances?

Mr. Poe: You recently publicly disclosed you are HIV-positive, a disclosure likely to overshadow much of your policy platform. How does your campaign not become about The HIV-Positive Candidate Running For Congress?

Sen. Thompson: Isn’t your current campaign to get an obviously-hopeless-cause special session of the Florida Legislature to consider gun control measures a baldfaced political exploitation of the Pulse tragedy?

Chief Demings: Speaking of gun control, did you ever find that gun you lost?

Mr. Poe: You grew up in Pine Hills and then you left to seek your fortune, which you earned. What have you done for the old neighborhood since?

Ms. Fahmy: You’ve stood up to the Democratic establishment for backing Chief Demings, and in a couple of cases embarrassed them. If you win the primary, how could you possibly cobble together support for a credible general election campaign?

Sen. Thompson: You’ve run some low-tech campaigns in the past and appear to be doing so again this year, compared with Chief Demings and Mr. Poe. If you win the primary and the Republicans get serious about Ms. Lowe’s campaign, where will you find the energy and savvy to keep up?